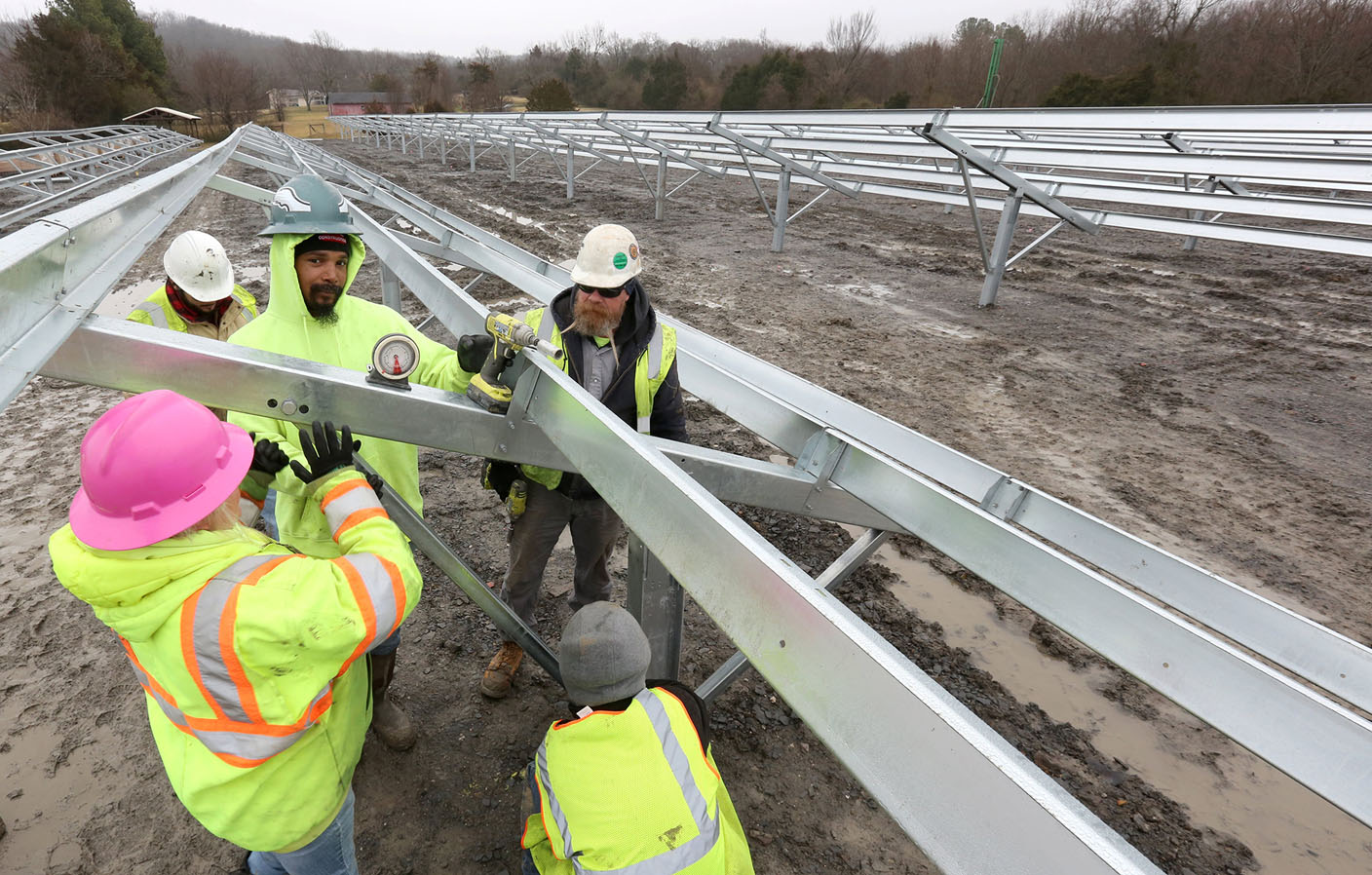 Arkansas cities, counties, schools and other entities are authorized to enter lease agreements for solar energy projects under Act 464 of 2019. The state has been a leader in solar job growth, reporting a 30% increase from 2017 to 2018, according to the Arkansas Advanced Energy Association. Only five states saw a higher year-over-year growth during that period. Arkansas ranked 18th among the 50 states in solar generation in 2018, adding 118 megawatts of solar generation, according to the association.

The Quorum Court approved spending about $8 million under a contract with Johnson Controls for an energy-saving project. The work includes installation of solar power, electricity-generating panels on the rooftops of two Road Department office and shop buildings and in a ground-mounted field at the county’s south campus where several offices are located on Clydesdale Drive.

Gonzales said most of the plumbing and lighting work has been done, but the restrictions imposed in response to the covid-19 pandemic have slowed work on the HVAC systems.

“When you’re installing heating and air conditioning units, you’re indoors and in close quarters for a lot of that work,” he said. “The work we’ve allowed to continue is work that can be done outside.”

Alex Ray with the Johnson Controls office in Little Rock told county officials last year the project is designed to allow the county to pay for the improvements through cost savings.

Ray said the county would budget for utility costs as it has done in the past, but the actual costs will be less. He said with the improvements, the county should cut its demand for electricity by 19%, water use should be reduced by 15% and consumption of natural gas should drop 8%. Johnson Controls will reimburse the county if the savings don’t cover the costs, according to the contract.

Ray told the county the solar field will generate 2,011 kilowatts, which roughly equals the county’s electricity usage for six or seven months out of the year.

“The bridge building has already produced enough electricity to power that particular building for an entire year in a couple of weeks,” he said. “The road building is the largest rooftop solar unit in Arkansas.”

The ground-mounted solar panels are installed on Clydesdale Drive and are being connected to the system, Gonzales said.

Gonzales said the energy produced by the solar fields will be fed into the Southwestern Electric Power Co. grid, and the county will receive credits for the power generated. If the bridge building or the road building, for example, produce more electricity than they use, the county will receive credits to reduce its electric bills for other buildings that are not directly generating power.

Gonzales said the project, once completed, will make Washington County the largest, nonutility producer of electric power in Arkansas.

Act 464 of 2019 made the county’s solar energy project possible by allowing governmental entities to enter into third-party lease agreements for such work.

One of the first to be done was completed in September 2019 by Fayetteville, which partnered with Ozarks Electric Cooperative. The city hooked up three solar farms and two battery storage facilities meant to provide power to its water treatment plants.

The facilities are on 87 acres of land at the two treatment facilities. The $23 million project is designed to produce 10 megawatts of power with 24 megawatt-hours of on-site energy storage, according to information from the city. The city estimates it will save about $180,000 a year.

Like the county project, when the electricity generated by the solar arrays exceeds the demand of the wastewater treatment facilities, energy will be distributed to the grid for use by cooperative members or to on-site battery storage systems, which can be dispatched into the grid during peak usage periods.

The installation of complete solar generating projects is only one way governments and other public entities such as schools can take advantage of solar power, according to Ashley Harris, vice president of communications with Ozarks Electric Cooperative. Harris said the cooperative has a solar power generating facility in Springdale where members can “lease” solar panels and receive credits on their electric bills. The credit is based on the output of the entire solar field and multiplies by the number of panels “leased” by a member up to 100 panels.

“We have a separate water utility here in Springdale, and they have a lot of land, but we’re not sure it’s in the right place,” Sprouse said. “We’ve also looked at buying into the Ozarks Electric solar farm. Other than that, we have solar in some of our buildings and stoplights in the city, but we have limited solar power facilities right now.”

City and county officials and others in Benton County said they are still looking at their options.

Cory Smith, with Carroll Electric Cooperative, said the cooperative is evaluating a 1-megawatt solar array, but no decision has been made. Smith said several school districts have reached out to the cooperative to see if solar power is feasible for them.

Hanna Lairy, communication director for the city of Rogers, said the city doesn’t have any solar energy generating capacity in place.

Bentonville has its own electric utility and buys power from American Electric Power, according to Travis Matlock, electric utilities director for the city. Matlock said the 25-year purchase agreement prohibits the city from installing its own power-generating facilities.

Benton County is similarly constrained by its contract with the city of Bentonville, County Judge Barry Moehring said.

“We have talked to a couple of potential vendors,” Moehring said. “Most of our power comes from the city, and there are some restrictions on putting energy back into the grid. And we’re not certain how much energy we could produce. There has to be sufficient space for a solar farm, and we don’t have space for that.”