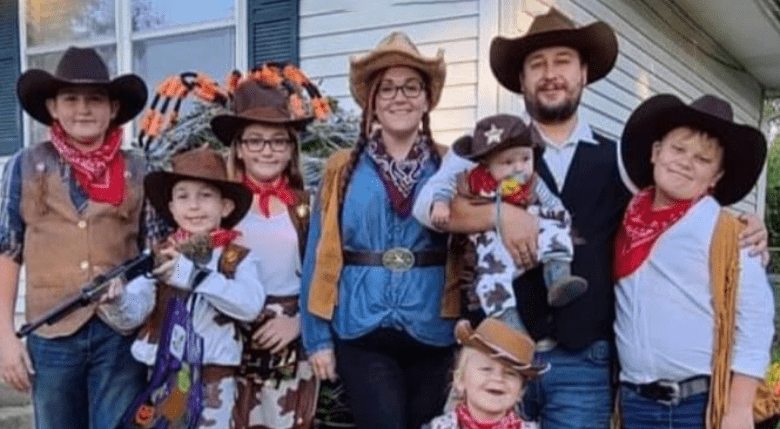 Hundred of strangers came to the rescue of a family of seven that had recently lost their mother Megan Richards. The resident of Oak Grove, Missouri, tragically passed away in November after contracting COVID-19. At the time, Megan was still breastfeeding her now 5-months-old son Myles and had planned to continue doing so until his first birthday. Unfortunately, she wasn’t alive long enough to make sure that happened. At that moment several kind strangers stepped right in to ensure that her baby boy never went without breast milk at least until he was 1.

“It was one of the things that she wanted the most for the baby, and it was important to her, so it was important to me,” revealed Megan’s husband, Michael Richards, while speaking to Good Morning America. The family has since received about 400 ounces of breast milk donated by people, who also gave them a freezer to store it.

According to Megan Richards’s sister, Brittany Eppenauer, Myles will require around 10,000 ounces of breast milk until his first birthday in July next year. Eppenauer, who is leading the breast milk donation drive for her sister, revealed how surprised she was to witness the outpour of support from women who have sent her 300 emails expressing their desire to donate.

“The first donation that we received came from a woman named Megan,” she shared according to PEOPLE. “It’s overwhelming to know that other moms care that much, to make sure that we can fulfill my sister’s wishes.” Megan was 32 when she sadly died on November 15 after contracting the virus the same month.

While her children and her husband only suffered mild symptoms, Megan’s condition worsened quickly. The unvaccinated mother had to be rushed to the hospital in an ambulance on November 14 after she passed out in the living room of her home. She was treated for dehydration and diagnosed with COVID pneumonia but doctors expected her to recover quickly.

However, the following day Michael recalls receiving a call from the hospital informing him that his wife was not doing so well. By the time he arrived at the hospital, doctors were performing CPR on Megan who reportedly had fluid build-up around the heart. Later that day, she took her last breath.

The grieving family is unsure as to how they would be fulfilling the role that Megan left behind when he died. She was a doting mother to her five children and even looked after a step-child that she had with her husband. “She was a perfect mother. Everything she did was for the kids,” said Michael who would have celebrated his second year of marriage with his late wife on November 30 had she been alive.

“We put off vacations and dates for ourselves so we could spend more time with the kids. Everything was about them,” he added explaining just how important the kids were for Megan. Recalling the time when she fell ill just before her death, Michael revealed how she made sure that her baby was breastfed even though she could barely stay up.

“Even when she got sick and I was trying to keep her in bed, and just try to get her to rest, I talked to her about it maybe being time to stop pumping — she’d been pumping to be able to feed him with a bottle — and she refused,” he said. Eppenauer who described her as “one of the best mommas around,” explained, “My niece’s birthday was on Dec. 1st, and it took eight adults to do what she could have done as one person in putting on a birthday party. We don’t know how we’ll fill her shoes, but we’re going to try.”

Janet and Michael Jackson had such a complicated relationship with their father, they had to call him “Joseph”

Queen Elizabeth is credited with the creation of a whole dog breed, find out which one