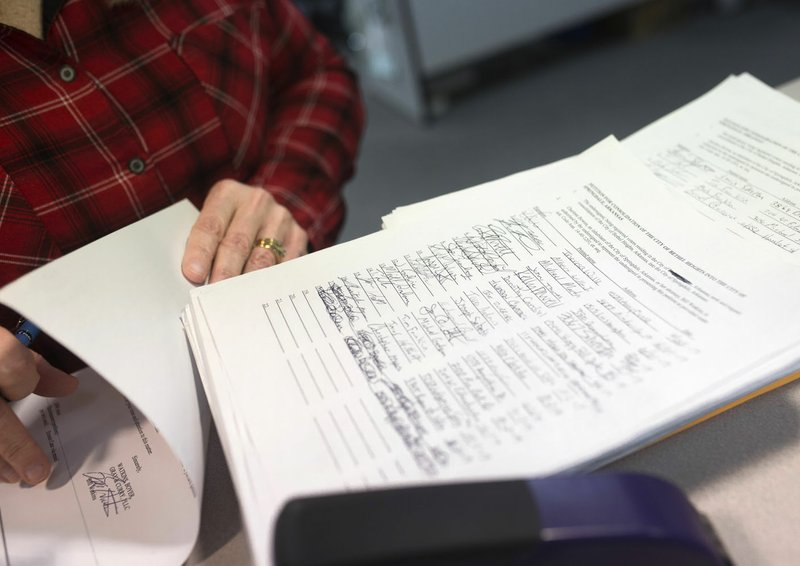 FAYETTEVILLE, Ark. — Gathering petition signatures statewide is almost impossible during a pandemic, according to a lawsuit filed Wednesday in U.S. District Court in Fayetteville.

The suit asks the court to extend the July 3 state deadline for submitting petitions to get a proposed state constitutional amendment on the Nov. 3 ballot. Supporters of a change in how legislative and congressional districts are redrawn filed the suit.

Those districts are redrawn every 10 years, said Bonnie Miller of Fayetteville, chairwoman of Arkansas Voters First, the group filing the lawsuit. There will be no chance to change the redistricting process until 2030 if this measure isn’t on the ballot in 2020, she said.

The amendment process that’s set out in state law, combined with state directives intended to prevent the spread of disease, violates the plaintiffs’ constitutional rights, the suit says.

In a related issue, independent candidates are considering a similar legal action. Those candidates, who must submit petitions to get on the ballot, asked Gov. Asa Hutchinson two weeks ago to reduce the number of signatures they need to achieve that goal. Their deadline is May 1. Attorney James Linger of Tulsa confirmed Tuesday that a lawsuit on those candidates’ behalf is being prepared.

A state commission consisting of the governor, the secretary of state and the attorney general redraw legislative boundaries after each U.S. census, which takes place every 10 years. The census is underway now with a legal deadline to be complete by Dec. 31.

The Legislature draws congressional districts based on census numbers.

The proposed constitutional amendment would set up an independent, nonpartisan commission to redraw those boundaries. Having those boundaries set by partisan elected officials leaves the process open to manipulating borders for partisan advantage, the group claims.

If the proposed amendment “is not on the ballot in 2020, then it cannot be approved, and there can be no Citizens’ Redistricting Commission in 2021 when the state legislative and congressional district lines are drawn for the next decade,” the suit says.

The suit also requests that the court remove the state’s requirement for notarization of signatures and allow electronic signatures. State law requires petitions to place a measure on the ballot in November’s general election to have 89,151 signatures of registered voters, a number set by calculating 10% of the votes in the last governor’s election. The law also requires that signatures come from at least 15 of the state’s 75 counties.

“What we’re asking for is very narrow,” Miller said Wednesday. “Electronic signatures are accepted for a lot of things already, including important legal documents. They have audit trails and lots of protections. They are secure and reliable. This is a way to move forward safely.”

Doyle Webb, chairman of the state Republican Party, disagreed that a delay or other changes are needed. The party opposes the proposal, he said, noting that this would be the first significant change to the method since Republicans got to make up the reapportionment panel.

“This proposal has been floating around for months,” Webb said Wednesday. “They could have started this petition drive a year ago.”

“This is a proposed amendment to the state constitution, a serious matter,” Webb said. “We should be concerned about the integrity of the system.”

The dates set in the law were chosen for sound reasons, he said.

“The secretary of state has to have time to verify those signatures,” Webb said. “If not enough of them are valid, the people bringing the petitions need time to gather more signatures. Public notice has to be given. Ballots have to be prepared.”

As for the proposal itself: “If it ain’t broke, don’t fix it,” he said.

Chairman Michael John Gray of the state Democratic Party said the pandemic is a self-evidently major historical event disrupting almost everything and, therefore, the lawsuit’s requests are reasonable.

“If this was a different issue brought by some right-wing group and I was completely against it, I’d say the same thing,” Gray said. “Other courts and also elected officials have given other groups a lot of leeway in this situation. I think there’s merit there in what they’re asking. Their constitutional rights are hampered.”

The Voters First group hoped that the restrictions on person-to-person contact and gatherings of large crowds, ordered by the governor to stop the spread of the coronavirus, would ease. But the weeks that have already passed have made meeting the deadlines impossible, said George Shelton, spokesman for the group.

“Not only is it a logistical nightmare, but it’s unsafe,” he said.

Adella Gray of Fayetteville, one of the suit’s plaintiffs, lives in the Butterfield Trail Village retirement community, he said. It would be unsafe for her or the people living in the village to interact with someone going door to door to collect signatures, he said.

The Voters First group paid $210,076 to a private firm managing petition drives, the suit says. The group hired the firm before the coronavirus pandemic started.

“Within days of AVF beginning its canvassing, the governor issued the first of a series of restrictive executive orders dealing with the covid-19 pandemic” on March 11. Restrictions on events where crowds can gather have tightened ever since, the suit says.

The Voters First group gathered fewer than 100 signatures before the orders and advisories from the governor, the suit says. The orders barred the events where canvassing is most effective, such as fairs and farmers markets, according to the suit. Restaurants and bars, another efficient source of signatures, were ordered closed.

Petition-drive organizers have decided against sending canvassers when gathering places open because they must get close to others to do their task, the suit says. If the canvassers went, adhering to state requirements for social distancing makes approaching voters for signatures impossible, it says.

“Plaintiff Robert Allen wants to sign the AVF petition, but, given that he is immuno-compromised due to his chemotherapy treatments, he would have to disobey” guidelines from the federal Centers for Disease Control and Prevention, the Arkansas Department of Health and his doctor, the suit says.

The governor’s orders, health emergency notwithstanding, “severely burden” the plaintiffs’ First Amendment rights to free speech and free association, along with Fourteenth Amendment rights to due process, the suit claims. The suit cited a federal case in Michigan from earlier this year that loosened petition requirements in that state.

The Arkansas suit was filed against Secretary of State John Thurston, whose office oversees elections. The secretary had no comment on the litigation, a spokesman for his office said.