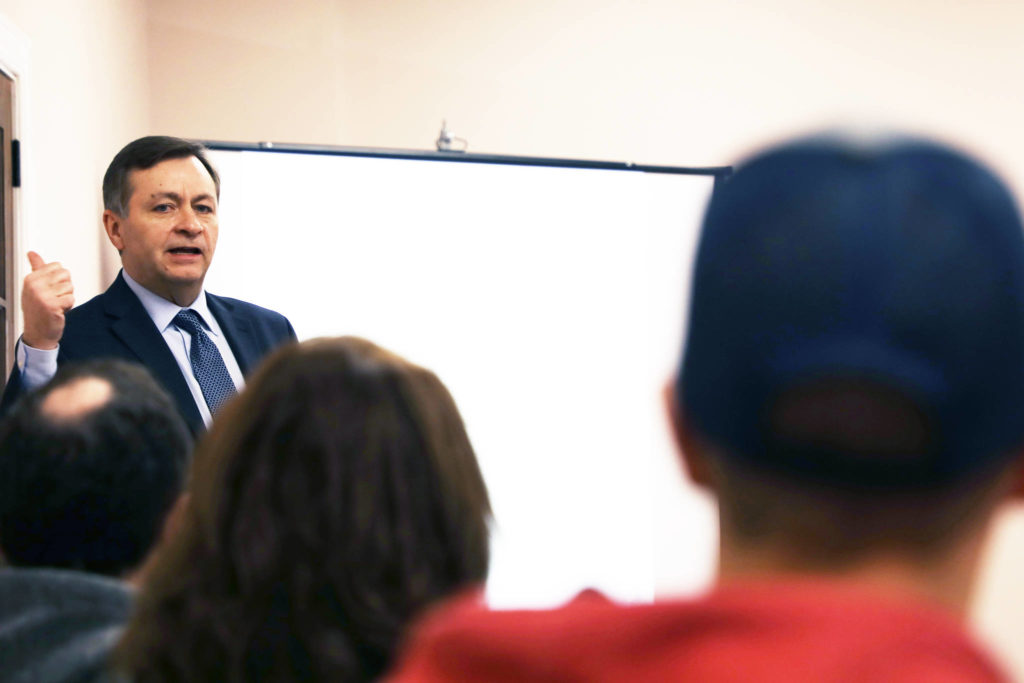 Hill and others have asked the state to find legal grounds to delay the process a year in light of the pandemic-induced economic meltdown. If the state cannot grant permission, Hill said he may delay reappraisal a year anyway and seek forgiveness.

The reappraisals are likely to raise taxes about 30% on average for Washington County, Hill said. The full increase would take several years to phase in, and there are some caps and exemptions, he said.

Johnson said Sebastian County wouldn’t have jumps in value as large as Washington County would, “but I’m with Russell on this.”

“Raising taxes after people got hit with this pandemic would be kicking people while they’re down,” Johnson said.

Hill asked the state Assessment Coordination Department if there is a legal way to delay the reappraisal until next year. By then, appraisals should reflect the full impact of the covid-19 pandemic, he said. Charlie Collins, commissioner of revenue for the finance department, confirmed the department is looking at legal options but hasn’t made a decision.

“People would be getting their new appraisals in July if we go ahead this year, while they’re still trying to dig themselves out of the rubble caused by this pandemic,” Hill said, referring to the worldwide covid-19 outbreak. The disease has already closed some business, has reduced revenue at others and has caused record unemployment insurance claims.

The reality of the pandemic should not be ignored, said Steve Clark, president of the Fayetteville Chamber of Commerce. The chamber supports Hill’s efforts, he said.

“It’s not just businesses,” Clark said. “People are struggling to pay their rent and house payments.”

Washington County’s last reappraisal took place in 2015. Reappraisal this year would take into account the five years of rising values since. Business, including those in real estate, boomed during those years and caused Northwest Arkansas property values to peak right before the pandemic hit, Hill said.

“In 2015, things were just starting to gain momentum again after the recession, and then in 2016 things took off like they were shot out of a cannon,” he said.

Pulaski County assessed property on a three-year cycle in 2003, 2006, 2009 and 2012, Thompson said. At the end of that period, the growth after the recession made the county change to a five-year cycle.

Appraised value is the total estimated value of a piece of property. Twenty percent of that value is used to calculate the taxes due. Therefore, a house appraised at $200,000 would have a taxable, or assessed, value of $40,000. The millage rate of tax for the property is applied to that assessed value. The tax rate varies by location.

A house in Fayetteville appraised at $200,000 would be taxed at 57.95 mills. That includes school, county and city taxes for a total bill of $2,318. Such figures are often subject to exemptions such as the $375 homestead credit for the taxpayer’s primary residence.

State law would cushion the full impact of the increased values. The bill for a 2020 reappraisal would not come due until October 2021. The law limits a tax increase caused by a higher value to no more than 10% a year. A home used as a primary residence is limited to 5% per year. Further, exemptions for the elderly and disabled freeze appraisals for tax purposes. Still, property tax bills would rise year by year until the full value was reached.

Property taxes in Arkansas largely go to schools. About 81% of the revenue raised by property taxes in Washington County and 77 % in Sebastian County go to public school districts, tax records show.

School administrators realize how reappraisal during a pandemic puts property owners in a bind, said Charles Cudney, director of the Northwest Arkansas Education Service Cooperative. However, the pandemic also imposes severe financial pressure on schools, he said. The cooperative advises and consults with all public school districts in the region.

“Readers of your article may think the schools don’t need that much money because classes are closed,” Cudney said. “The truth is our costs have gone up. They’re running huge deficits in our food service,” kept open to feed poor children, he said.

Individual student instruction by computer imposes new costs, including new software and computers and internet access to students whose families don’t have them, he said.

“Then there’s the state budget, which is largely spent on education,” Cudney said. “We’re going into a recession. The state’s required to keep a balanced budget, and there is no guarantee education’s allocation is going to stay the same.”

District administrators and school board members realize property owners are hurting, but that does not remove the pressure on districts to meet their obligations, he said. Regional superintendents will meet with Hill via video conference Wednesday, Cudney said.

“The earth is shifting beneath our feet almost daily,” Cudney said. Beyond that, there is the question of whether there is a legal way to delay the reappraisal, he said.

Hill acknowledged there may be no legal avenue. If there is not?

“I don’t know what the consequences would be, but right now I’m about 90% sure I would not do it,” he said of reappraisal in 2020.

Property owners may appeal to their county’s equalization board if they believe an assessment is too high, but that board will be swamped if Washington County reappraises this year, Hill predicted.

Money to school districts from property taxes won’t fall whether reappraisal goes through this year or not, both Hill and Johnson said. Clark made the same point. Property tax revenue grew for the past five years thanks to new construction, even without reappraisal. Delaying reappraisal would, at worst, leave the schools in a status quo, they said.

The schools are going to be supported, Clark said.

“In the chamber, we know the only way to attract and retain people to come here is to have a great education system,” Clark said. “No one wants to jeopardize that.”