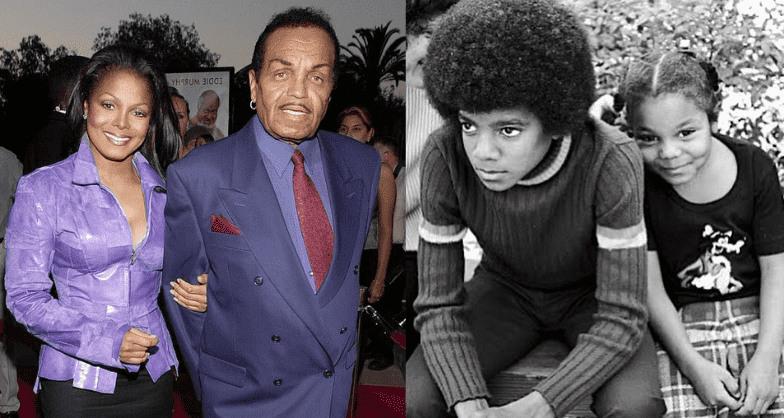 It’s remarkable what one single family—the Jacksons—could do to shape the world of pop music as we know it today. And the man credited for orchestrating it all is Joe Jackson, the family’s patriarch who ruled over his children with an iron fist.

Joe dreamed of becoming a famous star himself, but when that failed, he decided to engineer the careers of his children and fulfill his dreams through them. Making use of the abounding talent in the Jackson household, Joe turned about half of his children into childhood superstars by giving the world The Jackson 5. He then focused most of his attention on his two children, Michael and Janet, and made sure they turned into stars that the world would remember for several generations.

Unfortunately, the success came at a heavy price.

Joe never spared the rod and was often physically abusive to his children if any of them stepped out of line. Even Janet, who was the youngest of Joe’s ten children, was not spared from her father’s strict control. The singer still remembers being whacked once by her father when she was very little.

“I was very young, I remember being younger than 8,” Janet told Piers Morgan in an interview. “I can’t remember what it was that I did. I can’t remember if I truly deserved it… My father never touched me aside from that time.”

Apart from being in charge of nearly everything his children did, Joe also never allowed that to call him “dad” or “daddy.”

Joe was adamant on ensuring that his children saw him as “Joseph” and not “Daddy.” And he once gave a reason for this: “You had all those kids running around calling ‘Dad, dad, dad,’—it sounds kind of funny to me,” Joe said. “I didn’t really care about what they called me, just as long as they listened to what I had to tell them to make their lives successful.”

Although Janet remembers her father being extremely hard on her, she admitted that her older siblings had it far worse than she did.

“He’s very tough… When my brother Randy and I came along, I think my parents got pretty tired,” Janet said. “Having nine kids and raising these children, my other brothers and sisters would say, ‘You guys have it so easy.’ My parents were a lot more lenient with us. I thought I had it very strict.”

Despite everything they suffered, Janet believes her father had good intentions but did not always have the right methods to achieve things.

“I think he means well and wants nothing but the best for his kids,” Janet said. “I just think that the way he went about certain things wasn’t the best way, but it got the job done. And that’s because of maybe how he was raised, doing what he thought was best, not knowing any better.”

She continued to defend her father and said, “I know that he loves me. There’s no question about it—I know that he loves me, and he’s told me before… He has his issues, his things, the way he was brought up. He’s set in his ways and I think he did the best that he could and I think he did a wonderful job with us—the outcome—but the way he went about it, I don’t know if I agree with that. But we turned out OK.”

On several occasions, Michael, the king of pop, also admitted to having been abused by his father for the sake of fame and success. But he, too, defended his father while having a conversation with Rabbi Shmuley Boteach.

“God bless my father because he did some wonderful things and he was brilliant,” Michael said. “He was a genius.”

Before passing away from cancer at the age of 89, Joe admitted that his ways as a father were tough but said they yielded results. “I’m glad I was tough, because look what I came out with,” he told Piers Morgan. “I came out with some kids that everybody loved all over the world. And they treated everybody right.

Strangers donate breast milk for infant after his mom dies of COVID-19: “She was a perfect mother”