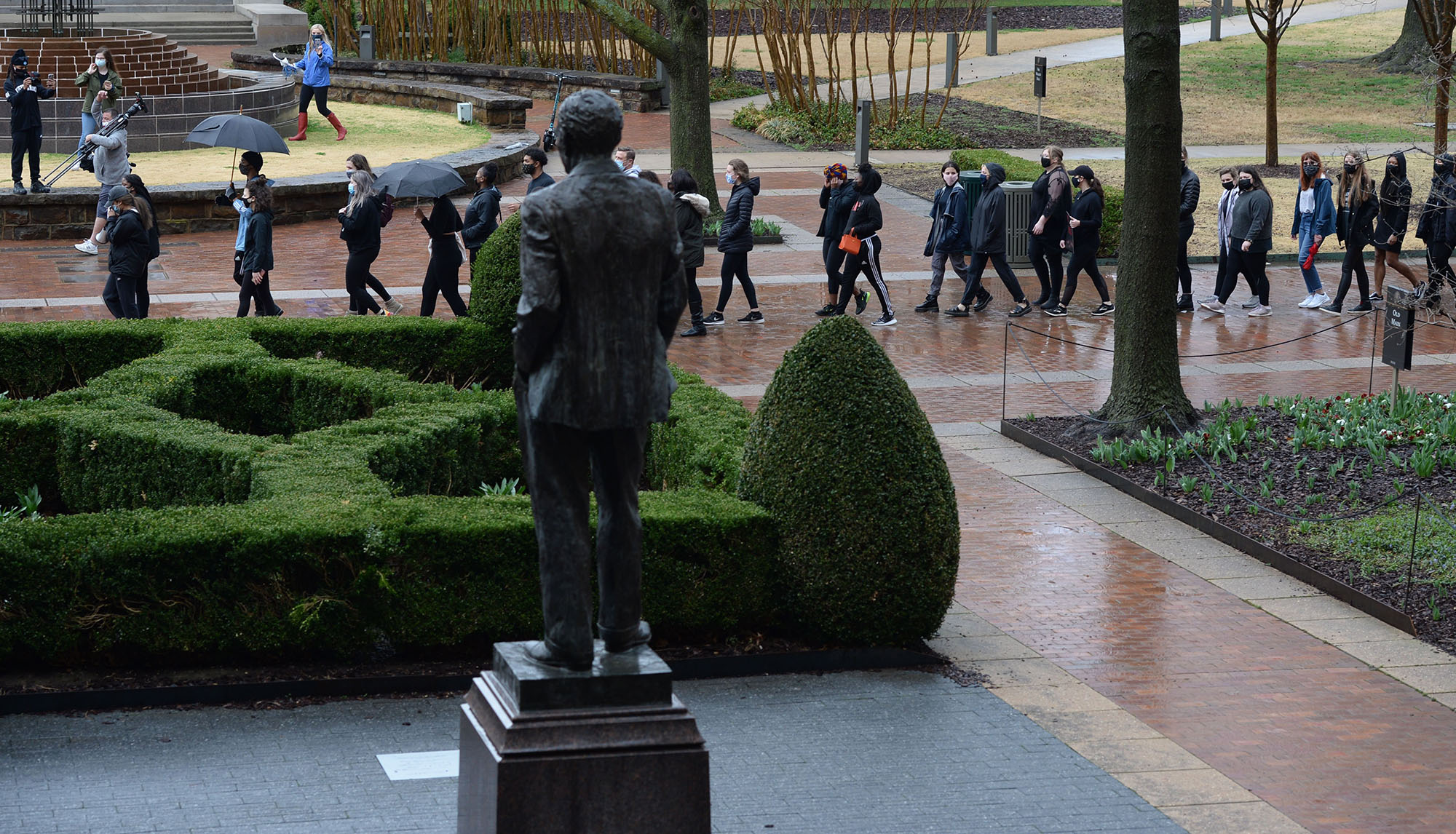 FAYETTEVILLE, Ark. – A University of Arkansas, Fayetteville committee has recommended the removal of a bronze statue of former U.S. Sen. J. William Fulbright from its location outside the iconic Old Main building and that his name be stripped from the university’s arts and sciences college.

The committee — made up of students, faculty, staff, alumni and others — also recommended that the name of a former Arkansas governor, Charles Brough, be removed from a campus dining hall.

In a written statement Wednesday morning, Chancellor Joe Steinmetz said next steps for the campus include “gathering feedback on the recommendations, considering additional input and perspectives from a wide range of university stakeholders, including faculty, staff, alumni and students.”

The university statement says the feedback process will conclude in late May and that any name changes must be approved by the university’s Board of Trustees.

“This matter is complicated by Sen. Fulbright’s deep connections to the state and university, and important international contributions, at the same time acknowledging that the name causes pain for some on our campus, which is unfortunate,” Stenmetz said.

Fulbright is perhaps best-known for introducing legislation in 1945 that created the international education exchange program named after him, but a strong push began last year to reconsider the campus legacy of Fulbright given his legislative record on civil rights in the 1950s and 1960s. Fulbright worked with other Southern Democrats to block the racial integration of schools and participated in a filibuster against civil rights legislation

The committee’s recommendation about removing the statue referred to the university’s past as well as Fulbright’s role in opposing integration.

“There was a time when Black students were not welcome on our campus. J. William Fulbright, while Senator, voted against the interests of Black students, and supported values antithetical to the university. For many, the statue is a memorial to those segregationist values and a daily reminder to our Black students of that time,” the committee said.

Black student leaders at UA have criticized Fulbright’s record on civil rights, last year promoting a petition to remove the statue and rename the college. They did so as part of a wave of social media posts that used the #BlackAtUARK hashtag to highlight racial biases and inequity experienced on campus.

The committee stated in the recommendations released Wednesday that it worked in response to student demands made as part of the #BlackAtUARK movement.

The committee voted 15-1, with three members absent, to remove the statue from its current location, stating that it could perhaps be moved off campus and “properly contextualized” to describe Fulbright’s legacy and connection to UA.

Fulbright is a UA graduate and, before his lengthy career in the U.S. Senate, served as university president from 1939-41. Historians note his efforts to promote world peace, and that he was an outspoken opponent of the war in Vietnam. He died in 1995, and the bronze statue of him on the UA campus was dedicated in 2002.

Apart from UA deliberations about the statue, a bill now on the desk of Gov. Asa Hutchinson sets forth new restrictions on the removal of many public monuments.

The language of the bill, SB 553, states that it applies if a monument is of a “historical person” on public property. Sen. Mark Johnson, R-Ferndale, is the lead sponsor of the legislation.

The bill states that a “historical monument shall not be relocated, vandalized, damaged, destroyed, removed, altered, renamed, rededicated, or otherwise disturbed,” but it does allow for a petition process to remove a historical monument. A waiver allowing for the removal of a monument may be granted if approved by a vote of the state Historical Commission, the bill states.

UA spokesman Mark Rushing said in an email Friday that the “university will follow the law concerning any recommendations or decisions on these matters” when he was asked, given the language of the bill, if the university would still consider removing the statue should the committee recommend doing so.