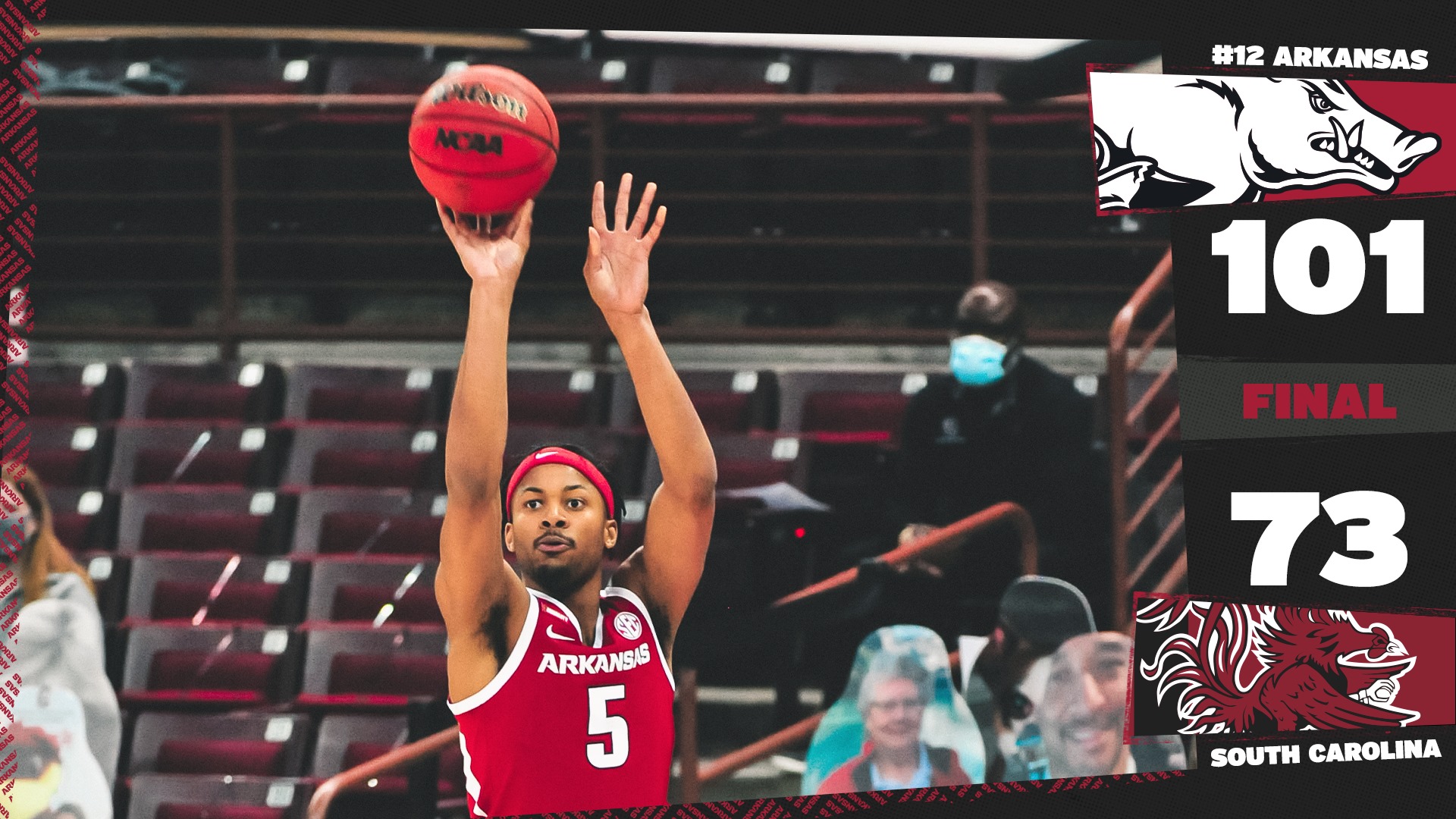 FAYETTEVILLE, Ark. – These are heady times for Eric Musselman and his No. 12 Arkansas Razorbacks. The Hogs are the hottest and maybe the best team in the Southeastern Conference.

Yeah, I know No. 8 Alabama locked up the regular-season title last Saturday and hold a two-game lead on the Razorbacks going into Saturday’s final day of regular-season play.

However, with the Razorbacks on a 10-game conference winning streak after thumping South Carolina, 101-73, in Columbia, S.C., and considering the Hogs whipped the Crimson Tide, 81-66, a week ago, I don’t think it’s all that audacious to suppose that at this moment Arkansas is playing the best basketball in the SEC.

The scary part is they appear to be getting better game by game.

The victory was Musselman’s 150th of his six-year college coaching career, and it was the 20th victory of the season for the Hogs. Musselman is the first Razorback basketball coach to guide each of his first two squads to 20-win seasons.

Historically, what kind of season are the Hogs having?

Well, Arkansas hasn’t won 10 SEC games in a row since the 1993-94 season. Not coincidentally, that was the year Nolan Richardson led the Razorbacks to the UA’s only basketball national title.

The Hogs are 5-3 on the road in SEC play and 5-4 on the road overall. It’s the first time since 1995’s NCAA runner-up season that the Hogs have won four consecutive road games.

The Hogs have one regular-season game left at 4 p.m. Saturday if Texas A&M, which has not played a game since January because of Covid-19 issues, makes its way to Fayetteville.

The Razorbacks have accomplished a lot already this season, but it’s hard to put in context exactly how much with the season ongoing. What is clear — as stated earlier — is that the Razorbacks continue to improve.

Musselman said following the victory at South Carolina that he hasn’t coached a college team with this much momentum behind them or one that enjoys playing together as much as these Hogs.

Even though the Gamecocks (6-13, 4-11 SEC) defeated Georgia, 91-70, on the road last Saturday, South Carolina’s not what anyone would consider to be a good basketball team. At best they are mediocre to opportunistic.

However, some thought the Razorbacks (20-5, 12-4 SEC) might be riding too high on the Hog after gaining a measure of revenge for mid-January blow-out losses to the Crimson Tide and LSU last week.

Tuesday night’s contest could have turned into a trap for a lesser team, but the Razorbacks showed up and and showed out. While South Carolina hung in the game for about five minutes, the Hogs weren’t about to allow the Gamecocks to derail the Muss Bus.

This team is so connected and are playing so well together. Musselman marveled after the game that the Hogs made 154 passes in the first half, which is the most by any team he’s coached. They finished with 305 passes for the game.

After attacking Alabama and LSU with drives to the basket last week, the Hogs flipped the script on the Gamecocks and came out gunning against USC’s zone.

Freshman swingman Moses Moody was on fire, hitting 4 of his 9 treys and 10 of 15 shots overall. With 4 of 4 shooting from the free-throw line, he tied his career high of 28. Moody also had 7 rebounds, 2 assists, and 2 steals.

Musselman continues to marvel at Moody’s maturity, saying he approaches the game like an NBA-level player. Moody’s just even-keeled, smooth, and money.

Moody’s backcourt mates J.D. Notae and Desi Sills were also smoking. Notae went 9 of 16 from the field and 3 of 8 from the arc to add 21 to the cause, while Sills came out of a slump after injuring his shoulder earlier this month to hit 5 of 7 treys to add 15 points to the tally.

Notae packed his box score line with with 5 assists, 5 steals, and 5 rebounds, while running the point most of the game.

Musselman complimented Notae, calling him a “menace” on defense and congratulating him on his development as ball-mover at point guard, and how he has improved his shot selection.

Grad-transfer Justin Smith likewise packed his stat line as he has done often in the Hogs’ winning streak. He scored 22 points, grabbed 8 rebounds, passed out 2 assists, and made a steal. Davonte Davis also grabbed 8 boards, 2 assists and 2 steals, but suffered 5 turnovers.

Sophomore Connor Vanover had 6 rebounds, blocked 4 shots and hit a 3-pointer. His tag-team partner in the paint Jaylin Williams did not make the trip for a reason Musselman did not reveal.

Again the most impressive aspect of this 10-game winning steak is how the Razorbacks continue to improve. The Revenge Week victories last week over Alabama and LSU only enhanced the Hogs’ confidence. The more they believe in each other, the better they seem to play.

It’s hard to know where the Razorbacks’ current trajectory will take them. I don’t think it’s out of the question for this squad to advance to the Sweet 16, but then again I’ve seen what I would consider better Razorback teams bow out earlier than expected.

Right now, it might be best for fans to just enjoy the ride that these Hogs are taking us on and not get into speculating how far the Muss Bus is going to travel.