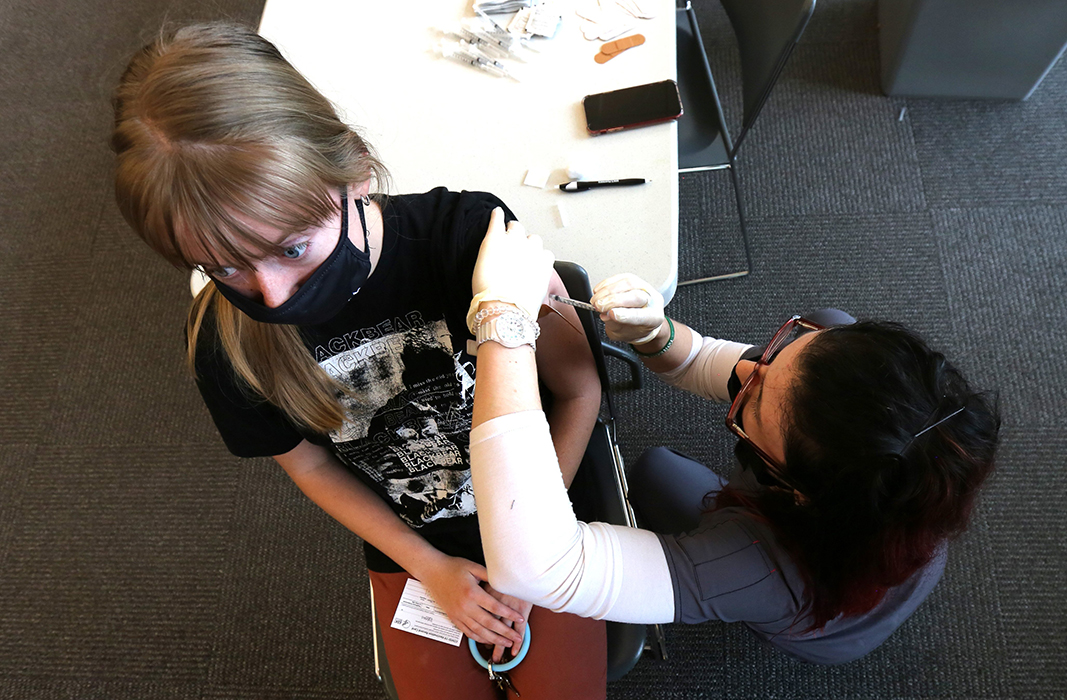 FAYETTEVILLE, Ark. – The Arkansas Department of Health anticipates a rise in demand for covid-19 vaccines as soon as the U.S. Food and Drug Administration approves the Pfizer vaccine for children ages 12-15, which could happen as early as next week.

The vaccination rate in Arkansas has been slowing over the past several weeks. Thursday saw 11,510 shots administered statewide, almost 3,000 fewer than the 14,426 given Wednesday, according to data released by the Health Department.

“When the first vaccines were distributed in December, we had over 1,000 hospitalizations [and] nearly 21,000 active cases,” Hutchinson tweeted. “Looking at today’s report, we can tell the vaccine is effective. Getting vaccinated protects you, your neighbors [and] those you care about.”

State Epidemiologist Jennifer Dillaha said she expects requests for the Pfizer vaccine to go up as soon as it is available for children as young as 12.

“Predicting the future is not easy, but our hope is that pediatricians and health care providers around the state who are accustomed to giving vaccines will provide the vaccine to any family who wishes to have their teenager vaccinated,” Dillaha said.

Daniel Cate, co-owner of Market Place Pharmacy in Little Rock, said he expects a small increase in demand for vaccines, but not much of one, in the coming weeks. Market Place administers only Moderna shots, but medical professionals expect the FDA to approve Moderna for children ages 12-15 sometime in June.

“With adults we have 50% [vaccinated], so we’ll do maybe the same number of folks in that adolescent age range,” Cate said.

Market Place administered 200 to 300 shots per week in the early days of vaccine availability, but this week the pharmacy had only 30 appointments for shots. Cate said all 30 were administered Thursday and most were second doses.

Tanglewood Drug Store administers Pfizer shots, and owner Adam Wheeler said he expects an increase in demand after receiving several calls from parents about the coming expansion of eligibility.

Demand for shots at Tanglewood has decreased from 240 to 260 per week to only about 100 per week, Wheeler said.

Not receiving covid vaccines could limit people’s activity, which could be an incentive to get inoculated, he said.

“They’re going to have to get the vaccine in order to do certain things and travel certain places,” Wheeler said. “When that starts being enforced, maybe they will be more persuaded to get it.”

The Health Department supplied 100 Johnson & Johnson doses for a “pop-up clinic” at the Arkansas Travelers’ opening game Tuesday at Dickey-Stephens Park in North Little Rock in hopes of encouraging more people to get the shots. Only 11 people were vaccinated.

Dillaha said the Health Department’s local units in all 75 Arkansas counties are “identifying events in those counties where they can be present” to administer vaccines to people who still have not received them.

The state reported 188 new cases of covid-19 Thursday, compared with 240 a week ago.

The daily change in the number of active cases has been around 100 or less for the past two weeks, but the number of new cases has hovered steadily between 150 and 300 a day. Active cases totaled 2,151 Thursday, one less than the day before. Arkansas has seen a total of 336,948 covid cases since March 2020.

Benton County reported the most new cases Thursday with 26, Craighead County had 18 and Faulkner County had 16. All other counties had 15 or fewer.

The Health Department also reported a new case in a correctional setting.

Covid shots need to be where people are, Northwest Arkansas organizers say

Arkansas Covid Vaccine Total Ranks Among Lowest In US