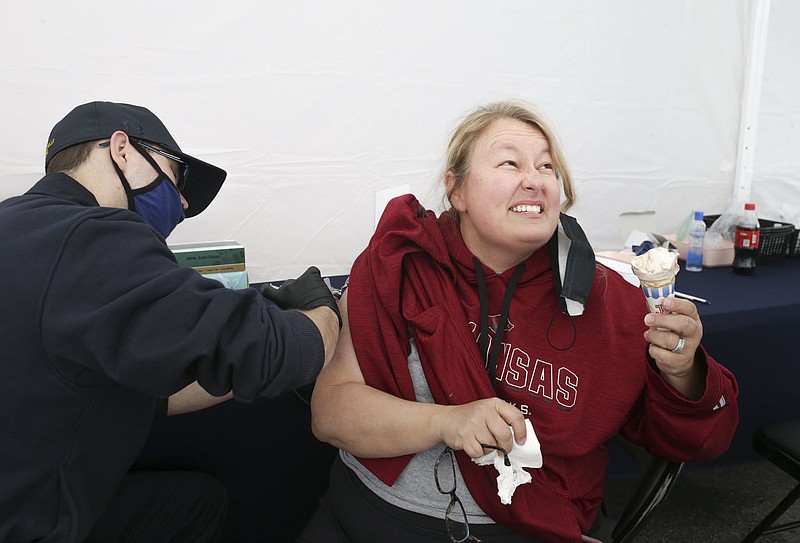 FAYETTEVILLE, Ark. – The Northwest Arkansas Council is ready and willing to bring covid-19 shots to events wherever people are gathered.

Gov. Asa Hutchinson set a goal Tuesday to have half the state’s total population get at least a first shot within 90 days. So far 1,051,329 Arkansans have received at least one shot, which is almost 35% of last year’s estimated population of 3,030,522.

In Northwest Arkansas, about 44% of residents 16 and older in Washington and Benton counties have received at least one shot. That equals 79,156 in Washington County and 88,711 in Benton County.

The two counties have a combined population of 384,234 residents 16 and older, so nearly 33% of that group has been fully vaccinated while about 11% have one shot only.

The same day Hutchinson made his announcement, President Joe Biden set a goal to have 70% of the entire U.S. adult population with at least one shot. Nationally, the administration is shifting its strategy from mass standalone clinics to smaller clinics where people are already gathered and mobile clinics in rural areas.

Local leaders are employing the same strategy. Now, it’s just a matter of setting up shop.

The Northwest Arkansas Council has ample Pfizer and Johnson & Johnson doses available, said Ryan Cork, executive director of the council’s Health Care Transformation Division. Anyone hosting an event, big or small, can call the council and it will bring all the necessary equipment, doses and health professionals, he said.

The council has started to wind down its standalone mass clinics. It hosted its final clinic at the Northwest Arkansas Mall in Fayetteville on Thursday and will have a clinic at J.B. Hunt Transport Service headquarters in Lowell for a few more Fridays, Cork said. Attendance at the mass clinics has been dwindling, he said.

The council has started to reach out to churches and organizations to bring small clinics to the people. The challenge after that is getting people at those events to get the shot, Cork said.

“If my barrier is I don’t want to go to whatever mass event, well they’re already going to these other events,” he said. “Now, it’s truly, ‘I’m just not going to do it.’ I don’t know that we’ll win that, but at that point we’ve done everything that we could in terms of access.”

Downtown Bentonville Inc. partnered with Collier Drug Store to make the Pfizer vaccine available at its First Friday event. It’s possible the shots may become available at the city’s Farmers Market as well, depending on demand, a spokeswoman said.

The Hispanic Women’s Organization of Arkansas is partnering with Community Clinic today to provide Pfizer, Moderna and Johnson & Johnson vaccines 9 a.m. to noon during its annual May festival at 610 E. Emma Ave. The festival will be held online on Facebook live with a drive-through food sale. Those who get a shot will have a chance to win $100 or $250.

Margarita Solorzano, the organization’s executive director, said last year’s festival was canceled and this year’s is altered significantly. More people need to get a shot, she said.

“If we don’t stop the pandemic, we are going to continue having to adapt,” Solorzano said. “That’s why we feel it’s very important for people to get vaccinated so we can live our normal lives and have personal contact with other people and have the celebrations and camaraderie that distinguishes our community.”