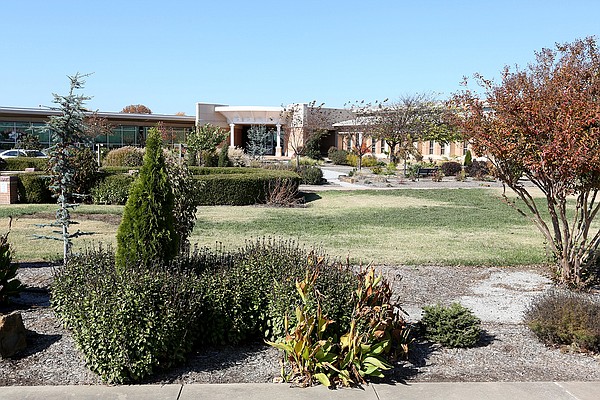 SPRINGDALE, Ark. — Designers creating a new vision of the Jones Center campus have put the nature and the culture of Northwest Arkansas at the center of the new space.

Scott Jordan and Jessica Doig of Civitas on Thursday evening presented via Zoom a concept of what the 52 acres of the Jones Center campus could become. Civitas is a landscape architecture and urban design firm in Denver.

The group has spent about six months discovering the wants and the needs of residents for the campus.

The wagon wheel and a truck wheel taken as images from Springdale’s pioneering poultry hauling industry and the traditional, bright, colorful skirts of swirling dancers in the LatinX culture led the group to design circular spaces throughout the campus, from a fitness pad to a ring of trees providing a place for walking around the campus, Doig said.

Meto maps from the Marshallese culture would be represented in forms and material designed to move people into and throughout the campus, Doig continued. Meto maps are created from sticks, guiding the Marshallese people from island to island, she said.

Designs representing weaving, which is part of several Northwest Arkansas cultures, would knit the places together, she added.

“So the cultures will overlap, and they will be able to tell their stories together,” she said.

The Jones Center last year received a Design Excellence Grant from the Walton Family Foundation to join the efforts to recreate and revitalize downtown Springdale.

The 52-acre campus includes not only the Jones Center, but also the Center for Nonprofits and the education building which houses the Community Clinic.

The areas between buildings would transform into gathering spaces large and small. The campus would include an area with playground equipment, sport courts, bathrooms, picnic areas, a place for farmers markets or maybe food trucks, a community room — and shade, Doig explained.

“It’s so cool and beautiful there,” she said. “You have amazing plants and geology and water.”

Ozark plantings would ring the entire campus, inviting people in and but also leading them to the downtown area beyond the campus. “But there are no boundaries,” Doig said.

Closer to the Jones Center’s main building, the campus would feature a fitness area, a skate park joining the bicycle pump track, a dog park and maybe a seasonal water feature with ice skating in the winter and water play in the summer.

And the design would reallocate parking throughout the campus.

“This is just a draft,” Jordan said of the design. “There are a lot more steps until this is completed and a lot more chances for community engagement. It will even evolve and change based on what we’re seeing tonight.”

About 30 people joined the online meeting.

With covid-19 leaving people at home, the design team and local officials developed different ways to gather public input. One found them serving catered meals on a drive-through basis at the Jones Center, with flyers inside the containers touting the Jones Center website and an online survey.

More than 600 people participated in the initial survey, Jordan said. He noted 65 percent of respondents said they would be comfortable with bold changes to the Jones Center and 75 percent want the space to celebrate the diversity of Springdale.

The presentation Thursday night included four polling questions about the Jones Center for participants, and another survey has opened on the website.

One of the polling questions gave participants several options for phasing the construction as money is raised for the project.

Another was designed to determine the design team’s strategy for public art.

The team plans this summer a contest with submissions to choose three local artists to join the design team, Jordan said.

“It’s critical they be involved in the creation for the placement of art, the interests and the cultures,” he said.

“We want to create an environment that has meaning for everyone — whether you want to read or work or ride or gather — so that everyone can create memories,” he said.