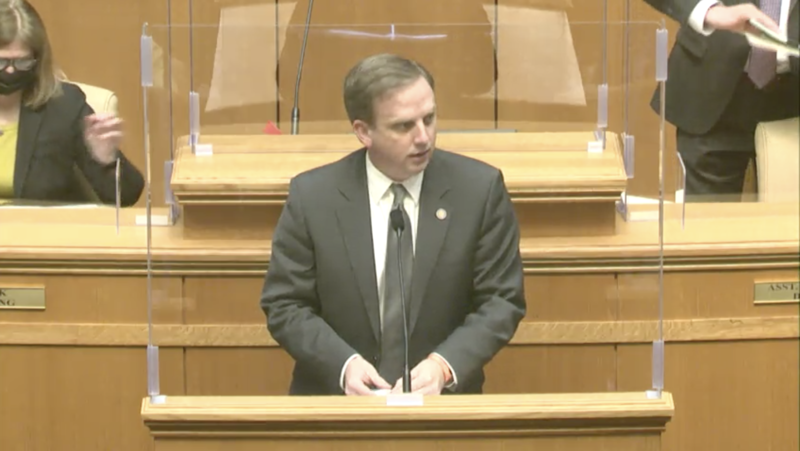 Arkansas – Arkansas House Speaker Matthew Shepherd, R-El Dorado, said that the session’s expected April 9th recess and May 3rd sine die will likely be extended. He told members at the end of the day’s House session and elaborated to reporters in his end of the week press conference.

“We’ll file a resolution to extend the session by a little bit,” Shepherd said. “I know members are concerned about having enough time to get their bills through and get them moved on.”

The legislature will meet Monday and Tuesday of next week, then take off for spring break.

Shepherd did not give a certain date for final recess and sine die. He said one of the complicating factors in working towards a session end is the once-a-decade redistricting process. While the Board of Apportionment has to redraw legislative district lines, the Arkansas Legislature approves Congressional district boundaries. U.S. Census data is delayed in its compilation and that has state legislators hog-tied with moving forward on the redistricting process.

The House Speaker said lawmakers may recess indefinitely and regroup after September 1st, a possible date for Census data to arrive, to finish the redistricting business and clean up additional legislative business. This would avoid the need for the governor to call the legislature into a special session.

“The most likely scenario, and I think the path you’ll likely see as we move forward, would be that we would recess for an extended period of time and then would come back in for the primary purpose of redistricting. There probably would be some other language in there that would allow us to handle some other things, just on kind of a clean-up basis. That likely, right now, looks like the path forward,” Shepherd said.

Another issue certain to complicate earlier recess or adjournment is the Revenue Stabilization Act. Known as RSA, it sets the spending priorities for the state and assures a balanced budget. Shepherd said in his press conference with reporters that RSA talks have only been informal at this point 67 days into the regular session.

“Usually what will start happening is we will have some more formal meetings on the RSA. That just hasn’t happened yet because of, well, in part because of timing, but we’ve also got a number of other pressing issues that have demanded our attention for the time being. But, I do anticipate those discussions starting very soon,” Shepherd said.

He also said lawmakers and DF&A officials are trying to understand how the latest round of coronavirus funding may be restricted. There is some guidance that states may not be able cut taxes and receive the federal money. Arkansas is slated to receive about $1.7 billion in state fiscal relief, according to Gov. Asa Hutchinson.

Shepherd said that rules and regulations haven’t been developed yet for the federal money, but he believes there is a way to segregate funding to allow for tax cuts with state revenue while keeping federal money out of that mix.

“We’re looking at what those stipulations may be,” Shepherd said. “It is a concern. It is something we’re looking at. We’re trying to understand what are the implications of that. Are there things that we could do structurally keeping such funds separated? Is that sufficient? At this point, we don’t know.”