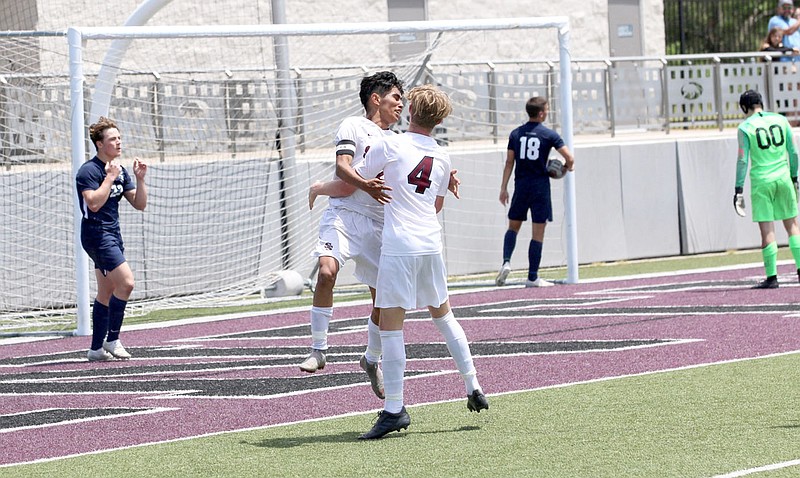 SILOAM SPRINGS, Ark. – Siloam Springs had chances in regulation, both overtimes and the kicks from the spot period to wrap up a Class 5A quarterfinals victory over Little Rock Christian.

Unfortunately for the Panthers, finishing off the Warriors was not in the cards on Friday afternoon.

Little Rock Christian outshot Siloam Springs 7-6 in kicks from the spot to take a victory after a 1-1 draw in 100 minutes of soccer in the 5A state tournament at Panther Stadium.

Siloam Springs junior goalkeeper Jedi Hunter had made a kick save on Little Rock Christian’s seventh penalty kick, giving the Panthers a chance to convert for the win.

But Little Rock Christian’s goalie Charlie Gordon answered with a save of his own on Erik Gomez to keep the game alive.

LRC’s Joey Schroeder scored on the next kick to take a 7-6 lead, and Siloam Springs’ Ronald Mancia missed wide right as the Warriors escaped with the victory.

“That’s the thing about soccer. It’s a unique way to end the game,” said Siloam Springs coach Luke Shoemaker, who was not around for the kicks period after being issued his second yellow card, which resulted in a red and ejection, right before the kicks period began. “It just comes down to who can consistently make it and who can get the one stop. We got the one stop and they countered with a stop.”

Little Rock Christian (14-3), the 5A-Central No. 1 seed, advanced to Saturday’s semifinal game against Russellville. Results were not available at presstime.

Warriors coach Barry McCaskill praised his team’s effort against Siloam Springs and the season in general.

“We started the year 0-3 in nonconference, took our lumps and then found our stride once conference season started,” McCaskill said. “We’ve been building throughout the year. Super proud of these guys. They didn’t let the first three games dictate their year. They found their stride and absolutely left it all on the field.”

Less than eight minutes into the second half, Little Rock Christian tied it up on a shot by Wyatt Thomas that hugged the back line before crossing in front of the net and into the far corner.

“I don’t know how it went in,” McCaskill said.

Siloam Springs had some late looks to take the lead in regulation. A Mancia kick just missed the top of the net and hit the football upright.

In the first overtime, Ivan Sandoval had a shot that was saved by Gordon.

“Charlie Gordon, senior, just an outstanding keeper, outstanding kid,” McCaskill said. “He had some nerves before the game, but when it came down to it he came up big.”

About a minute and a half later, Franklin Cortez got near the front of the Warriors’ goal and his shot went wide of the net.

“We got Frank probably all the way down into the six (yard box),” Shoemaker said, “if not a little further behind. He just missed that back post.”

It was a disappointing loss for the Panthers, who end the season with a record of 16-4.

“This doesn’t define our life,” Shoemaker said. “I hope I prepared them to be better men than I did soccer players. What they do as husbands and fathers and in their career, that means more to me. Right now it hurts, but the sun will rise tomorrow.”

El Dorado had Siloam Springs on the ropes for the first 60 minutes of the opening round of the Class 5A boys state soccer tournament, clinging to a 1-0 lead.

The host Panthers, though, converted two second half penalty kicks — both by senior Franklin Cortez — to stay alive with a 2-1 victory at Panther Stadium.

“We talked about watching on film [Wednesday],” said Siloam Springs Coach Luke Shoemaker. “The team that limits their mistakes advances in state soccer. So on the flip side of that, El Dorado had two penalties in the box that allowed for us to have some PKs. Franklin, he’s a sniper when he gets in there.”

El Dorado stunned the Panthers in the third minute when R.J. Thomas got behind the Siloam Springs defense for an early goal.

The score remained 1-0 with El Dorado goalkeeper K.J. Thomas, who was starting for injured Dave Carruth, making several saves along the way to keep the Wildcats in front.

“We asked a lot out of K.J., and he met the challenge for sure,” said El Dorado Coach Rex Hayes.

But in the 62nd minute, a hand ball in the box set up a Siloam Springs penalty kick, which Cortez drilled into the lower left corner to tie the game 1-1.

The match remained tied until the 72nd minute when Cortez was fouled in the box by Patrick Sixbey.

Cortez scored again in the lower left corner for a 2-1 lead. It was his team-leading 23rd goal of the season.

“I feel the two goals that didn’t happen in open play really deflated us, and we didn’t play our game the way we should have played it there toward the end,” Hayes said. “It’s just tough to come back mentally from those kind of calls. I didn’t get a good look at the handball. The foul in the box is what it is.”

The Wildcats (10-4-1) played the final minutes of the game with just 10 men after Sixbey received his second yellow card, which resulted in a red card.