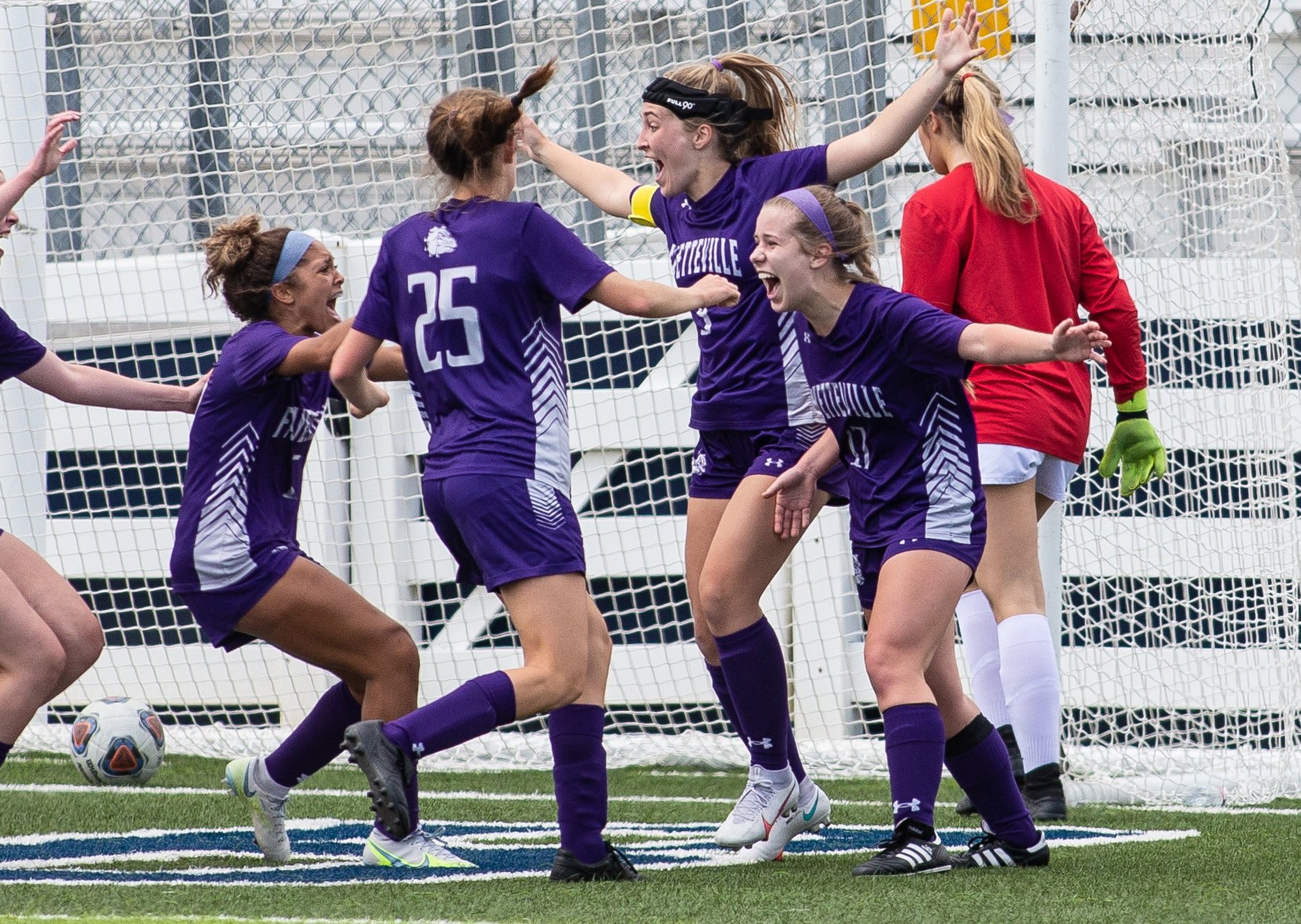 SPRINGDALE — That was the message from Fayetteville, which defeated Mount St. Mary 2-1 on Friday during second-round action in the girls Class 6A state soccer tournament at Wildcat Stadium. Fayetteville (15-0-3) remained unbeaten while advancing to today’s semifinal at noon against North Little Rock.

The game was scoreless until Bella Kieklak put Fayetteville ahead with a kick into the net on an assist from Jayden Tyler early in the second half. Maddie Wilburn then converted a penalty kick to offset a goal from Mount St. Mary’s Savannah Bosley, who scored with 8:36 left to tie the game.

“One more, one more,” Bosley shouted to her teammates after the Belles cut the Fayetteville lead to 2-1.

But Mount St. Mary couldn’t get off another good shot on goal as Fayetteville’s defense cleared out the last possession to end the game.

“We talked at halftime about moving the ball around and look for the openings,” Fayetteville Coach Joe Thoma said. “Sometimes it’s hard to play the first game and Mount St. Mary, they played a game. They were charged and ready to go. We talked about being ready to take everybody’s best shot, and we’re happy to survive and move on.”

Fayetteville took the field after Conway and Bentonville West pulled off upsets over higher-seeded teams earlier in the day. Mount St. Mary, the No. 4 seed from the 6A-Central, played Fayetteville evenly until Kieklak scored a goal five minutes into the second half.

“Jayden Tyler put the ball over the top, and I managed to get a foot on it,” said Kieklak, one of nine seniors on the Fayetteville team. “We knew we had to pick up the pace in the second half.

“At halftime, our coach told us to calm down and finish what we’ve been working for all year. We came out more level-headed and more aggressive, which was a big factor in pulling out the win.”

Fayetteville appeared in control when Wilburn scored on a penalty kick, but Bosley’s goal breathed new life into the Belles, who couldn’t get a second score past Fayetteville goalkeeper Haley Woodward.

“Any time Fayetteville and Mount St. Mary play, it’s always a good game,” Thoma said. “There’s a lot of energy out there and that’s the way it was today.”

Sisters Brityn Pavatt and Tristyn Pavatt scored goals in each half to lead Conway past Bentonville.

Brityn Pavatt, a freshman, scored first in the first half before Tristyn Pavatt, a junior, matched her with a goal in the second half for Conway (10-6-5), the No. 3 seed from the 6A-Central.

Kaylee Vorisek scored the only goal for Bentonville, the No. 2 seed from the 6A-West. Conway pulled off the upset after losing 2-0 to Bentonville during the regular season.

Tianna Jones scored two goals for the second consecutive game for surging Bentonville West, which advanced to the semifinals after ending the regular season with five consecutive shutouts.

Jones also had two goals on Thursday when No. 4 seed Bentonville West opened state tournament play with a 3-1 win over Fort Smith Northside.

Tara Garringer and Josie Sembrot also had goals Friday for the Lady Wolverines (11-6-2), who will play Conway today at 10 a.m.