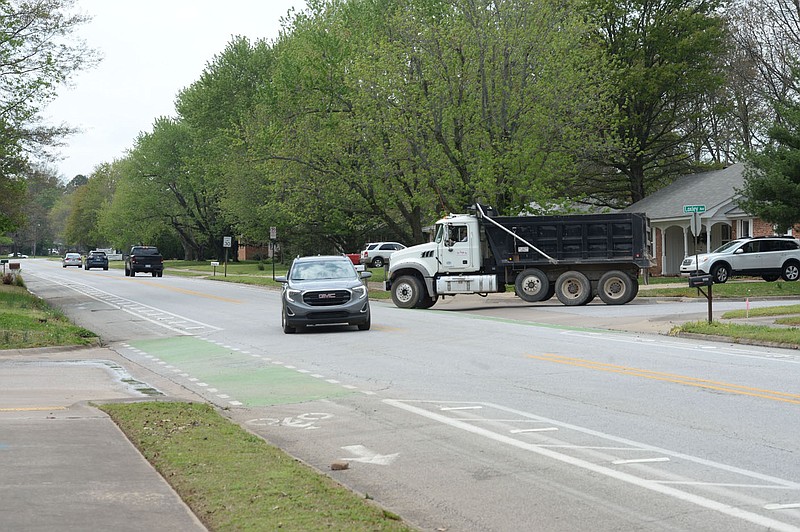 FAYETTEVILLE, Ark. — The city is planning to redesign Rolling Hills Drive with two mini-roundabouts, new pedestrian crossings and narrower driving lanes and a turn lane in the middle.

The approximately 3,715-foot-long street will have a 6-foot-wide sidewalk lining the north side and a 10-foot-wide trail on the south side, according to conceptual drawings. Trees and street lights will adorn both sides. The street now has a sidewalk on just the north side.

The roadway will be 30 feet wide, with two 10-foot-wide driving lanes and a 10-foot-wide turn lane in the middle. The redesign will use the entire 59-foot-wide right of way.

For years, the street had two 11-foot-wide driving lanes with bicycle lanes painted on the north and south sides. In November 2018, BikeNWA used a grant from the Walton Family Foundation to install temporary, protected bicycle lanes on both sides. The project involved placing 4-inch-tall rubber bumpers and tall, thin plastic sticks called bollards running alongside the road to serve as a barrier between cars and bicycles or pedestrians. The objects reduced the driving lane widths to 10 feet and widened the bicycle lanes slightly to 6 feet.

The temporary project lasted about a year and drew a mix of responses from residents. City officials in 2019 said about three-quarters of online responses were negative and a quarter positive. The bumpers and bollards were replaced in February 2020 with short, flat rumble strips with reflectors a foot closer to the curb on each side.

The permanent project has an estimated construction cost of $4.4 million. Money will come from the nearly $74 million transportation bond issue city voters approved in April 2019.

A crosswalk with flashing lights will be installed near Market Avenue. Two mini roundabouts will be put in at Sheryl and Loxley avenues. The centerpieces in the middle of the roundabouts will have a different texture and color from the road, but cars will be able to drive over them.

“Because I’m a fire marshal, I’m cautiously optimistic,” he said. “I think this could work for us and maybe be a solution for other areas.”

Jeff Webb with Garver, the engineering firm behind the project, said the roundabouts will require some additional right of way. However, they are designed to take up as little private property as possible and avoid trees, he said.

Chris Brown, the city’s public works director, said public comment inspired the redesign. He acknowledged most of the commentary, once the city unveils the concepts online, will likely revolve around the roundabouts.

“It’s something the neighborhood asked for related to traffic calming and better access from the side streets,” Brown said. “This is what we presented at the previous public meeting, with a little bit of a design effort involved to refine those concepts.”

A public input session was held in November 2019 showcasing preliminary street and drainage improvements along the street. About 10,000 cars travel on the street per day, according to an Arkansas Department of Transportation map.

The city will soon set up a webpage to get public feedback on the project with letters sent to nearby property owners, Brown said. Construction is tentatively scheduled to start in late 2022, he said.

A separate $3.5 million project will redesign the intersection of Rolling Hills Drive and College Avenue with a roundabout in the center of the Fiesta Square parking lot. The roundabout will connect Appleby Road to the south with an extension connecting what is now a dead end at Plainview Avenue to the north, as well as Rolling Hills. That project also is being paid for through the transportation bond issue.

Participate in a Study About Anxiety and Personality and Earn $20