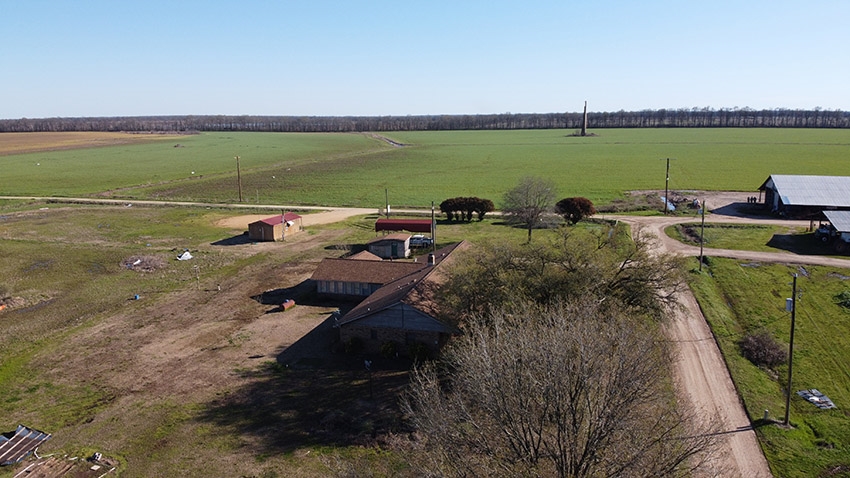 FAYETTEVILLE, Ark. – A report focused on the history and significance of the landscape housing the former Japanese American internment camp in Jerome, Arkansas, was recently recognized in an annual Historic American Landscapes Survey competition.

Kimball Erdman, associate professor of landscape architecture, led the project team at the University of Arkansas, which included Angie Payne, a senior research assistant at the Center for Advanced Spatial Technologies (CAST), and a group of Fay Jones School of Architecture and Design students. Greg Herman, associate professor of architecture, also contributed research for the report. Their “Jerome Relocation Center” report tied for second place in the 2020 HALS Challenge, whose theme this year was “Vanishing or Lost Landscapes.”

The HALS Challenge is a national, professional-level competition calling for short format historical written reports that increase awareness of particular cultural landscapes, and then those reports are submitted for inclusion in the Library of Congress.

This is the fourth time that Erdman and a team of students have submitted a report in the HALS Challenge, which started in 2010 and is co-sponsored by the National Parks Service and the American Society of Landscape Architects. Twice before, their reports have placed third.

Erdman said they tied for second this time amid one of the strongest competition pools to date, which is especially notable since the U of A team was the only one of the winning teams with student members.

The landscape at the center of the report has substantial historical significance for the state and the nation, Erdman said. Jerome started as a logging community in the Mississippi River Delta in southeast Arkansas in the early 20th century. After the logging industry shut down in the 1930s, the United States Government purchased about 13,000 acres of nearby undeveloped land and selected it to be one of several sites in Arkansas where the Farm Security Administration would establish an experimental farming community. This particular community was named Chicot Farms. Erdman said poor farmers were given a plot of forested land to clear and drain, and they were supposed to establish a farm, but Chicot Farms struggled to fulfill its vision.

In 1942, the U.S. Government halted the Chicot Farms project and selected the site to become one of 10 Japanese American internment camps across the country. Between 1942 and 1945, some 120,000 Japanese Americans were held at the 10 camps in California, Arizona, Wyoming, Colorado, Utah, Idaho and Arkansas. About 8,000 Japanese Americans, primarily from the West Coast, were forcibly relocated to and incarcerated in Jerome.

In late 1944, the land became the site of Camp Dermott, a prisoner-of-war camp that held German soldiers in World War II. The site held POWs until it closed in 1946.

Today, the land is a privately owned farm. Erdman said that very little physically remains on the site from these historic periods, just a few roads, concrete remnants, a railroad, a bridge and a smokestack from a hospital boiler. A granite monument was added in the 1980s to commemorate the Japanese Americans.

Erdman said this report is valuable because it helps to tell the stories of the struggling Arkansas farm families, incarcerated Japanese Americans, and the prisoners of war.

“These are very important stories,” he said. “The problem is that they are forgotten because nothing remains, and so the only way for this story to be told is through other means. People can’t go and visit the site and understand what happened, so our report becomes one of those means by which people can remember these stories.”

In 2019, the University of Arkansas received a nearly $270,000 grant from the Japanese American Confinement Sites Grant Program for work documenting the Jerome Relocation Center.

Payne, in her role as a CAST researcher, is the principal investigator for the grant, and Erdman serves as co-principal investigator. Erdman said this is the third grant that CAST and its collaborators have received for work on the Arkansas internment camps. As part of a previous grant, they created a website, “Rohwer Reconstructed,” that focuses on the Rohwer Relocation Center and has digital archives, maps, a timeline of events, an interactive reconstruction and a visualization that shows how artifacts in the collection are connected. For the latest grant, the CAST team will expand the website to include similar archives and tools for Jerome, minus the digital reconstruction component.

The HALS report for the Jerome site is an early step in completing this work. However, Erdman will have to do additional research at the National Archives and Records Administration in Washington, D.C., because so many of the records and documents from these periods have yet to be digitized.

Erdman started working on the report in the spring 2020 semester with his historic landscape preservation class. His class researched the site and was even able to go on a site visit in early March, right before the university switched to virtual education due to the COVID-19 pandemic. Professor Herman had previously studied the Chicot Farm period, and he visited the class to discuss his research on the site.

Erdman said it was just fortunate timing that this report on Jerome fit perfectly with the 2020 HALS challenge theme, because the “Vanishing or Lost Landscapes” theme was announced after his class was already planned.

“What I told the students is, ‘This is extremely important work. You’re providing a terribly valuable service, and for your resume, you’ll have the opportunity of saying that you contributed to a report that is submitted to the National Parks Service and entered into the Library of Congress.'”

However, he said the most important part is what you don’t see — “the benefit that we’re providing to the families of the internees and other people who were affected by this site directly or indirectly.”

The research was especially poignant as the team was working on the project amid a summer of racial reckoning.

“It was very much on people’s minds, I think, just how devastating racial discrimination can be to a population,” Erdman said. “So many of the messages that are told by this site, unfortunately, have been or can be repeated if we’re not careful. The singling out of populations and blaming them for certain things, and discriminating against them — we just seem as a country even today to be all too ready to revert to that.”

Fayetteville school board approves more than $13 million in projects