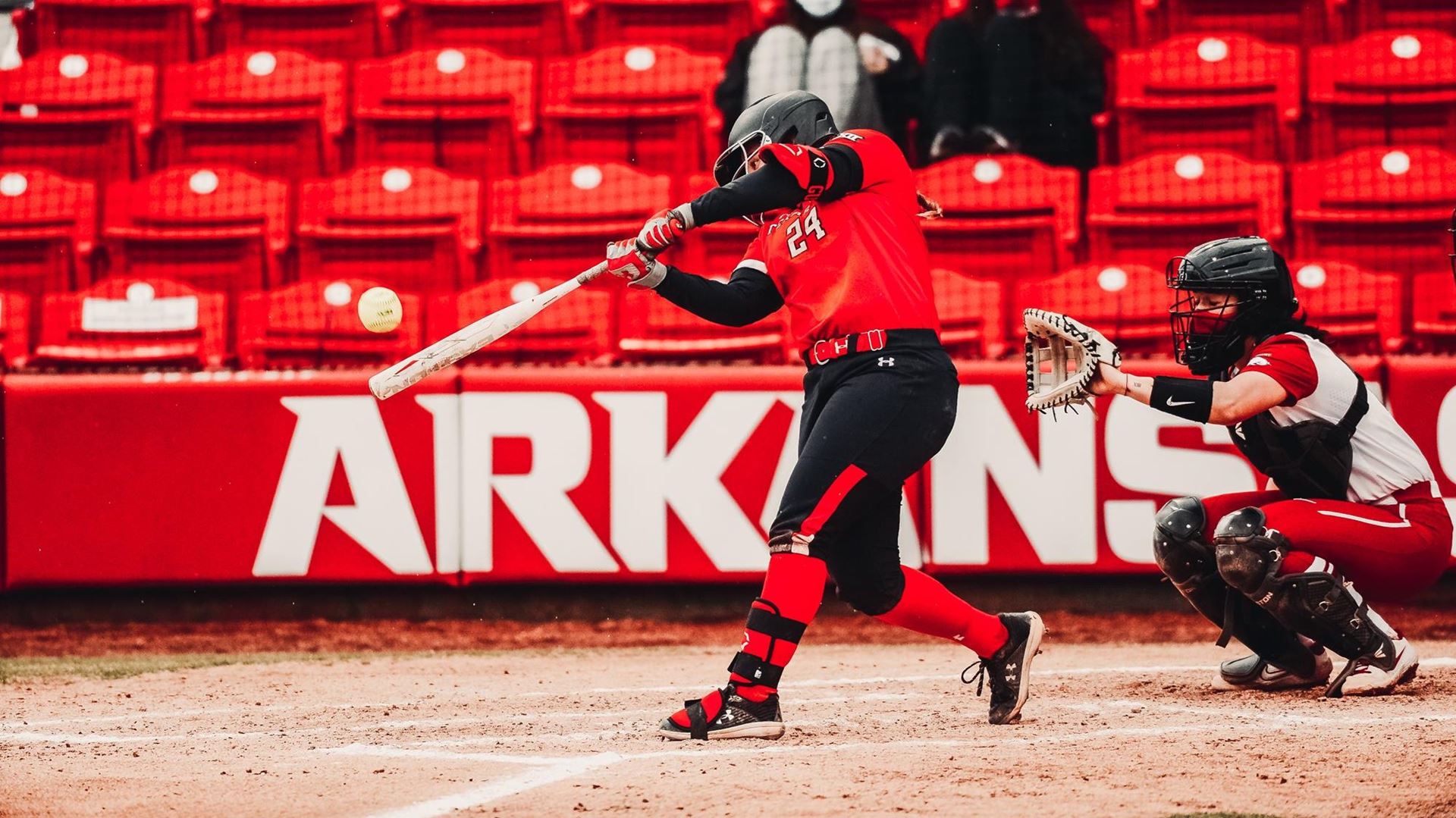 FAYETTEVILLE, Ark. – The Red Raiders picked up a win against Southeast Missouri before falling to No. 21 Arkansas on the final day of the Razorback Invitational.

The Red Raiders exploded for seven runs on 11 hits in the win over SEMO thanks to a four-run seventh inning. Tech was then blanked by the 21st ranked Razorbacks for the second time on the weekend, giving up eight runs on 11 hits.

SEMO 1, Texas Tech 7
The Red Raiders came out swinging in the top of the first when Zoe Jones belted a two-run home run to take the early 2-0 lead. With Heaven Burton on second off a leadoff base hit, Jones crushed a ball over the left field foul pole for her first home run of the season. The two runs also marked the first time this season the Red Raiders scored in the first inning.

Tech put another run on the board in the second sparked by a leadoff double from Peyton Blythe. Blythe moved to third on a sac bunt from Kelcy Leach and later scored on a groundout by Alanna Barraza.

Edmoundson had a no-hitter through three innings but a leadoff single in the fourth gave the Redhawks their first hit. SEMO put runners on the corners with two outs but a foul out to Leach ended the inning with no damage done.

SEMO got on the board in the bottom of the sixth with an RBI double down the right field line to cut the game to 3-1. The Redhawks attempted a double steal, but Leach threw the lead runner out at third for the second out of the inning. The Red Raiders escaped the inning after Erin Edmoundson collected her fifth strikeout of the game.

The Red Raiders used a four-run two-out rally to add some insurance in the top of the seventh. An infield single by Breanna Russell and a single to left by Blythe loaded the bases for Tech with two outs. Ellie Bailey, pinch hitting for Leach smacked a two RBI single to right field. The Red Raiders used aggressive base running to add a couple more runs. Jacee Hamlin, pinch running for Bailey, stole second and Blythe stole home on the throw down. Hamlin then advanced to third on the throw home. One more run came across when an error on the short stop allowed Barraza to reach safely at first and scored Hamlin to make it 7-1.

Edmoundson (3-2) retired the Redhawks in order in the bottom half of the inning to secure the victory. The senior went the distance for the Red Raiders giving up just one earned run and finishing the game with six strikeouts.

Burton, Blythe, and Jones each recorded two hits. Jones reached base four times in the game and tallied two RBI.

No. 21 Arkansas 8, Texas Tech 0 (6 inn.)
The Razorbacks pushed a run across in the second inning after a pair of walks put runners in scoring position and a throwing error on a sac bunt allowed on run to score.

Arkansas added a second run in the third frame with a solo home run to left field.

The Razorbacks tacked on four in the fifth after back-to-back singles put two runners on for Danielle Gibson who sent a ball over the wall in right center. The fourth run came across on a double to center that scored a runner from first to make it a 6-0 game.

After another solo shot gave Arkansas a 7-0 lead in the sixth a hit by pitch with the bases loaded ended the ballgame in a run rule.