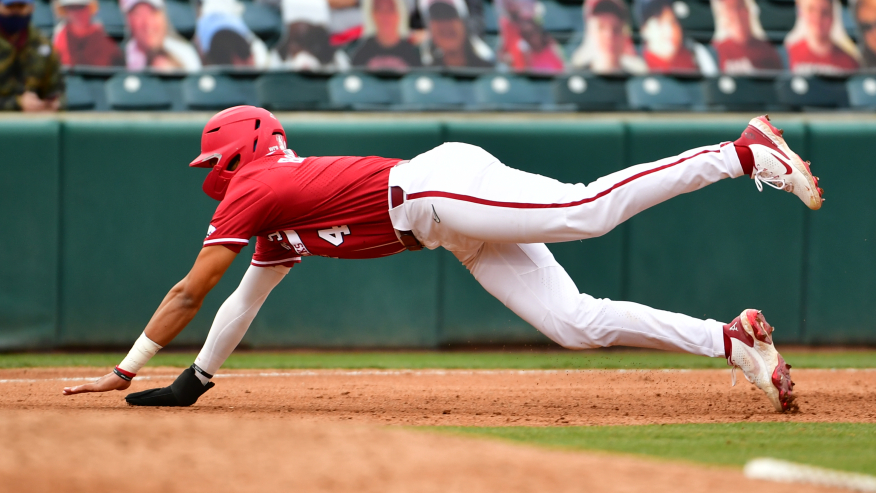 FAYETTEVILLE, Ark. — No. 2 Arkansas’ routine got thrown off when they had to play at 11 a.m. on Saturday, but they responded by recording the easiest win of the season 9-3 in a game that wasn’t as close as score indicate.

Dave Van Horn talked about how his team responding to the start four hours earlier than originally scheduled.

“Just obviously a really early start for us,” Van Horn said. “I mean, we had a team breakfast at 7 a.m. and we took batting practice in the fog. Nobody could see the ball past the infield. It was almost dangerous. We pulled some guys off.

“So, I give guys credit for coming out with a lot of life after the starter, knocked him out early. Took control of the game, it looked like. (Peyton) Pallette went out there and backed us up with some really good innings. Threw really nothing but strikes pretty much the whole game, five innings. So, proud of him. He’s had two really good starts overall, and that’s been great seeing that. So, did a lot of things well. Ran the bases well. Stole some bases. Put a lot of pressure on them, and obviously feel good about winning game three.”

The Razorbacks led 9-0 after four innings, including 4-0 after one. They coasted to the easy win and no late comeback was obviously needed in this game. Matt Goodheart played for the first time this season and hit third in the lineup. The fast start was exactly what Van Horn had hoped for.

“I feel like we got off to a great start,” Van Horn said. “We scored four runs and stole three or four bases in one winning. I think that probably got their pitcher out of the game. They felt like that he wasn’t quick enough to the plate. We were just going to keep running on him, and he was frustrated and obviously we got people on to be able to do that. We hit.

“Having Goodheart in the lineup, it brings a little more depth to our lineup I feel like. His first at bat, I don’t know which bat it was. He got a hit or a walk and then got a hit. He did a tremendous job. He hadn’t had batting practice until today. For the last two days out here and missed four or five days with the team. So, I thought his pitch recognition was pretty good and obviously one of the top hitters in the league. He makes us better.”

Van Horn added more on the aggressiveness his Razorbacks showed early on the basepaths.

“Just felt like the pitcher was a little slow to the plate, and his pick move was okay,” Van Horn said. “We saw it a couple of times. We didn’t feel threatened by it a whole lot. We have some pretty good runners on top. We just felt like we were going to make him change his delivery and speed up more. We were just going to keep the same running until somebody got thrown out. We did a good job of that. We created some problems for him out there.”

Pallette, just as he did in Arlington, Texas, threw strikes making quick work of SEMO each inning. He allowed three hits, walked one, struck out eight and 48 of his 65 pitches were strikes.

“He just has a really classic arm action,” Van Horn said. “He can repeat his delivery. It’s kind of repetition for him. He’s all around that zone. He doesn’t have a lot of bad misses with his fast ball. Maybe every now and then with an off-speed pitch. When he’s throwing a fastball, it’s going to be around the zone. Again, he did a great job. He went out and pitched the second, third, and fourth inning with a four-run lead, six-run lead, eight-run lead. He kept his concentration and did what he needed to do.”

Pallette now has two starts and seems to have done nothing but solidify his spot in the rotation.

“I think he had done enough to, before the season started, earn a spot,” Van Horn said. “He’s pitched fine. He’s pitched real good. So, I don’t plan on doing anything but keeping him right there in the rotation.”

Van Horn was pleased to see Pallette continue to go deeper into the game as well.

“I think last week, made him go four, and today he went five,” Van Horn said. “He didn’t have to come out of the game. He could have gone another inning if we needed him to, but we’re going to need that inning down the road, we feel like. And, so, just take care of him a little bit and he’s got it built up. So, when we get into league play in about three weeks, hopefully, they can give, five to eight innings and see how it turns out.”

Christian Franklin was outstanding on Saturday. He was 4-5 at the plate, hit a home run, knocked in three runs, stole two bases and crossed the plate twice.

“We’ve seen it all year as far as back in the fall and at the end of last year,” Van Horn said. “He’s getting stronger, powerful this year just because we’re working. He’s extremely strong. His swing is outstanding right now and that ball he hit today, he carried it right through a pretty good breeze and it just kind of rode out of here. He drove that ball. He pulled it right, right center. Just a strong kid with a really good swing.”

Several new faces got into Saturday’s game and one drew a lot of praise from Van Horn. Zack Morris faced two hitters and struck out both.

“Yeah, [Morris] came in with the bases loaded and one out and I think it was something like that,” Van Horn said. “He had two quick outs. Had that strikeout with a really good breaking ball in that inning. At that time, I think it was 9-1. They had the bases loaded and one out. They didn’t score. So, did a tremendous job. But we did get a lot of guys that got their first at bat or first time on the mound. It’s always a big deal to get that over with for them when they get the jitters out. And maybe next time, if it didn’t go great, it will be a lot better.”

Razorbacks hit No. 1 in most college baseball polls