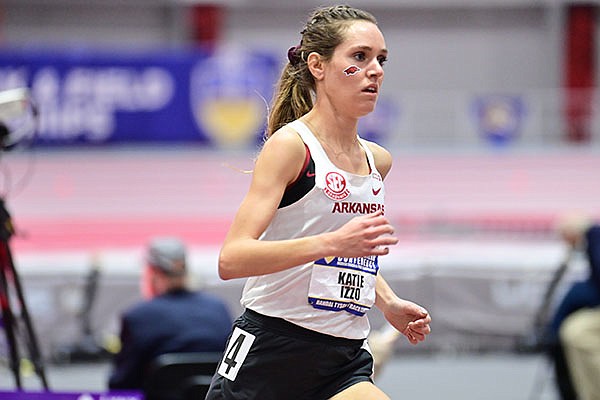 FAYETTEVILLE, Ark. — Arkansas’ men and women have the most entries for the NCAA Indoor Track and Field Championships next week in Fayetteville.

The Razorbacks’ women have a program-record 25 entries, more than double the 12 entries for the next-closest teams, Texas A&M, Florida and Texas.

Arkansas’ men have 18 entires, which are six more than a second-place tie between LSU and Oregon. The 18 entries are the most for the Razorbacks’ men since they last won an indoor title in 2013.

The Arkansas women, who won the NCAA indoors in 2019, are favored to win the indoor title again this year. The Razorbacks have seven top-five national times in six events, including the nation-leading time in the distance medley relay and 5,000 meters. Arkansas’ Katie Izzo has the nation’s best time in the 5,000 and teammate Lauren Gregory has the second-fastest time in the event.

The Razorbacks also have the second-fastest time in the mile relay, recorded last weekend when they won the SEC Indoor Championships at Randal Tyson Track Center by 60 points over runner-up Florida.

Oregon is the favorite on the men’s side with five NCAA-leading marks, including collegiate records in the distance medley relay and by Cooper Teare in the mile. Both records were set in Fayetteville.

Arkansas’ men won the team title at the SEC indoor meet last week without a champion in 17 events, including 15 individual events and two relays.