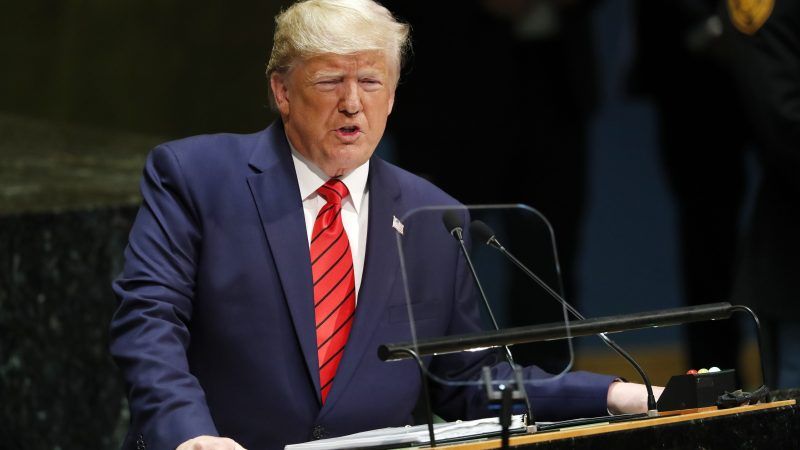 The Democratic-controlled Congress passed an article of impeachment on a 232-197 vote. The article accuses Trump of “high crimes and misdemeanors” for his role in an “incitement of insurrection.”

Trump encouraged supporters to descend on the nation’s capital last Wednesday (Jan. 6). The pro-Trump mob left a rally that Trump and his surrogates spoke at and sieged the U.S. Capitol as Congress was formally certifying the Electoral College vote for president, won by Joe Biden. Members of Congress disbursed for more than six hours while law enforcement got the rioters under control. Eventually, Congress confirmed the presidential results.

It is unclear when U.S. House leadership will submit the impeachment to the U.S. Senate, or when received, when the U.S. Senate will set a trial date. House Speaker Nancy Pelosi, D-Calif., has already named the nine impeachment managers who will argue for impeachment in the Senate trial. Rep. Jamie Raskin, D-Md., is the lead manager. The other managers are Reps. Diana DeGette (Colo.), David Cicilline (R.I.), Joaquin Castro (Texas), Eric Swalwell (Calif.), Ted Lieu (Calif.), Joe Neguse (Colo.), Madeleine Dean (Pa.) and Del. Stacey Plaskett of the Virgin Islands.

Senate Majority Leader Mitch McConnell, who will become Minority Leader on Jan. 20, indicated Wednesday he would not bring the impeachment to a trial while he led the U.S. Senate.

Trump was previously impeached in December 2019 for his efforts to influence the Presidential election but was acquitted in the U.S. Senate. The two articles of impeachment at that time accused Trump of abuse of power and obstruction of Congress for his behavior in the controversy surrounding military aid to Ukraine and relations with the new Ukranian President, Volodymyr Zelensky. Trump was accused of asking Zelensky to investigate potential corruption involving Democratic Presidential candidate Joe Biden and his son, Hunter, in Ukraine, while Trump delayed the military funding that Congress passed.

“I do not support this impeachment because rushing and short-circuiting the process of a serious criminal investigation by the House of Representatives would be a risky precedent that could lead to widespread abuse by both parties. We have a responsibility to investigate and present findings and that has not been done. I strongly support immediately appointing a bipartisan commission to investigate all events surrounding the attack on our Capitol. There appears to be evidence that some of the violent protestors came with the intent of doing harm against our government. If so, then those who chose the path of insurrection should be punished to the fullest extent of the law because that behavior should never be tolerated.”

U.S. Rep. Steve Womack, R-Rogers
“There is no defending the actions of rioters and the leaders who fanned the flames of insurrection. It was a national disgrace. But no option currently presented before the House will remove the President before his term ends on January 20th. The impeachment vote can therefore only serve to inflame tensions and test an already fragile nation. My position isn’t to appease any party, ideology, or person – it is to start the process of putting our country back together. Congress should be using this moment to solve for the pressing issues of America – defeating the coronavirus, enhancing vaccine distribution, ensuring an orderly transition of government, fighting socialist policies, reinvigorating our economy, and healing the deep divisions we face. Let us not be distracted.”

U.S. Rep. Bruce Westerman, R-Hot Springs
“I voted against impeaching President Donald J. Trump in the U.S. House of Representatives. Today’s rushed process is not in keeping with one of the House’s most solemn responsibilities. Unlike previous impeachment votes, there were no hearings and very little debate of the serious charges brought against the president. I carefully considered my colleagues’ arguments and determined that our constitutional duty to carefully consider the power of impeachment must not be circumvented for the sake of expediency. This rushed impeachment sets a dangerous precedent for future Congresses. In addition, Joseph Biden will become president in seven days. This vote does nothing to remove President Trump before that time.

“One week ago, I experienced the attack on the Capitol firsthand. I make no excuses for the president or any others involved, and I pray that our country never again experiences an event like this. All those involved must be held accountable for their actions, and they must receive justice according to the constitutional rights they have as citizens of this country.

“Political rhetoric and the events of the past week have highlighted divisions in Congress and across the United States. It has divided our friends and our families. Even in my immediate family, there are differences of opinion on impeachment. It’s in our states, communities and churches. My prayer is that we end the divisions and move forward together seeking a more perfect union.”

“There are but seven days before our nation witnesses the swearing in of our 46th president, Joe Biden.

After the horrific, catastrophic attack on the U.S. Capitol last week by a mob committed to disrupting the work of democracy, our nation is crying out for leadership – leadership that works towards healing our wounds both physical and spiritual. Yet, a week after the Capitol crisis, instead of leadership, we have more divisive and inherently political brinkmanship.

This includes President Trump claiming no responsibility for the toxic rhetorical environment that is directly related to the attacks of January 6, and Speaker Pelosi’s demanding a snap impeachment without reflection or even the full facts that led to the attack – as well as President-elect Joe Biden’s notable absence of action following his words calling for unity.

I ask: Have we not had enough recrimination and divisive rhetoric? Fingers pointing and responsibility not being taken?

For months, our beloved nation, filled with hundreds of millions of inherently good people, has suffered death and economic destruction in the midst of a global pandemic. But, instead of an effort of unity to focus on those and other critical needs, since the 2016 election, dangerous rhetoric has reverberated – from the pitched poison of the left urging attacks on police and cabinet members and from the right, claiming a stolen 2020 election.

After the final certification of the Electoral College on December 14th, when no reasonable path to victory was evident, President Trump should have welcomed President-Elect Joe Biden to the White House. Likewise, in an attempt to heal and unite, President-Elect Biden should have called the Speaker and said: “enough” to her plans for impeachment. And for her part, the Speaker should have followed her better instincts and stopped her caucus short of these twin bad constitutional precedents set, including this snap impeachment, which is where we find ourselves now.

So, this week, we’ve taken a vote to impeach the president, an action that will further divide and victimize the American people, desperate to pause this political brinkmanship. Instead, we should be working to find a commonality among us to aid our collective soul of democracy, wounded in the recent attack.

Alexander Hamilton in Federalist 65 told his 1788 audience: ‘The prosecution [of impeachments] … will seldom fail to agitate the passions of the whole community, and to divide it into parties more or less friendly or inimical to the accused.’

Just last week I talked about the fundamental importance of the United States Constitution and its requirement that the House and Senate meet and count the properly certified electoral college votes from our states. Today, Congress is yet again presented with a constitutional question: This time, whether the president’s rhetoric in the post-election period is the cause of the illegal and immoral attack on the U.S. Capitol, the seat of American democracy.

We are not presented with an impeachment article on treason or bribery, so we’re left with ‘other high crimes and misdemeanors.’

There’s no question that the president’s hot rhetoric, prone to exaggeration and self-aggrandizement, has been unattractive and in many ways divisive. The president in his post-election fiction and folly suggesting a landslide victory and a stolen election, in my view, sullies his four years of economic and national security accomplishments. He casts a shadow over his major initiatives in defeating ISIS, opening a new chapter in Middle Eastern peace with the Abraham Accords, and enhancing economic liberty and religious freedom at home and abroad. And this president’s rhetoric in the days leading up to Wednesday’s attack was unforgivable.

But what needs acknowledgment is that there are implications of Congress’ actions in relation to the fundamental protections afforded by the First Amendment. That the Speaker has set the precedent of offering no alternative short of impeachment – let me repeat that no alternative short of impeachment – in response to their past statements should be noted by all leaders across the political spectrum. And, this vote is a political exercise that will further inflame tensions rather than easing them, burdening the peaceful transfer of power rather than celebrating it.

Today, our nation cries for leadership from the current and future White House occupant, as well as from the leaders across the very Capitol that itself was attacked on Wednesday. Each of these critical leaders in our nation’s history at this moment would benefit from reflecting on John Jay’s admonition in Federalist 64 where he cautions: ‘The government must be a weak one indeed, if it should forget that the good of the whole can only be promoted by advancing the good of each of the parts or members which compose the whole.’

And so, let’s go forth seeking unity in purpose by honoring our Constitution, preserving this Republic, and calling on all Americans to advance the good of our nation and thus benefit the whole of our country.”

Sen. Cotton says he does not believe it is possible to deal with articles of impeachment after Trump leaves office and he does not feel that there is enough time to handle it before Jan. 20. His full statement is below.

“’There is no grievance that is a fit object of redress by mob law.’ Those words are as true today as when Abraham Lincoln spoke them. As I said last summer when mob violence gripped our streets, so I say again about the mob violence at our nation’s Capitol last week: those persons responsible should be held accountable in the courts to the full extent of the law.

The House has passed an article of impeachment against the president, but the Senate under its rules and precedents cannot start and conclude a fair trial before the president leaves office next week. Under these circumstances, the Senate lacks constitutional authority to conduct impeachment proceedings against a former president. The Founders designed the impeachment process as a way to remove officeholders from public office—not an inquest against private citizens. The Constitution presupposes an office from which an impeached officeholder can be removed.

Congress and the executive branch should concentrate entirely for the next week on conducting a safe and orderly transfer of power. After January 20, Congress should get on with the people’s business: improving our vaccination efforts, getting kids back to school, and getting workers back on the job.”

Over 3% of Arkansas’ population vaccinated so far, 60% of pharmacies complete Phase 1-A