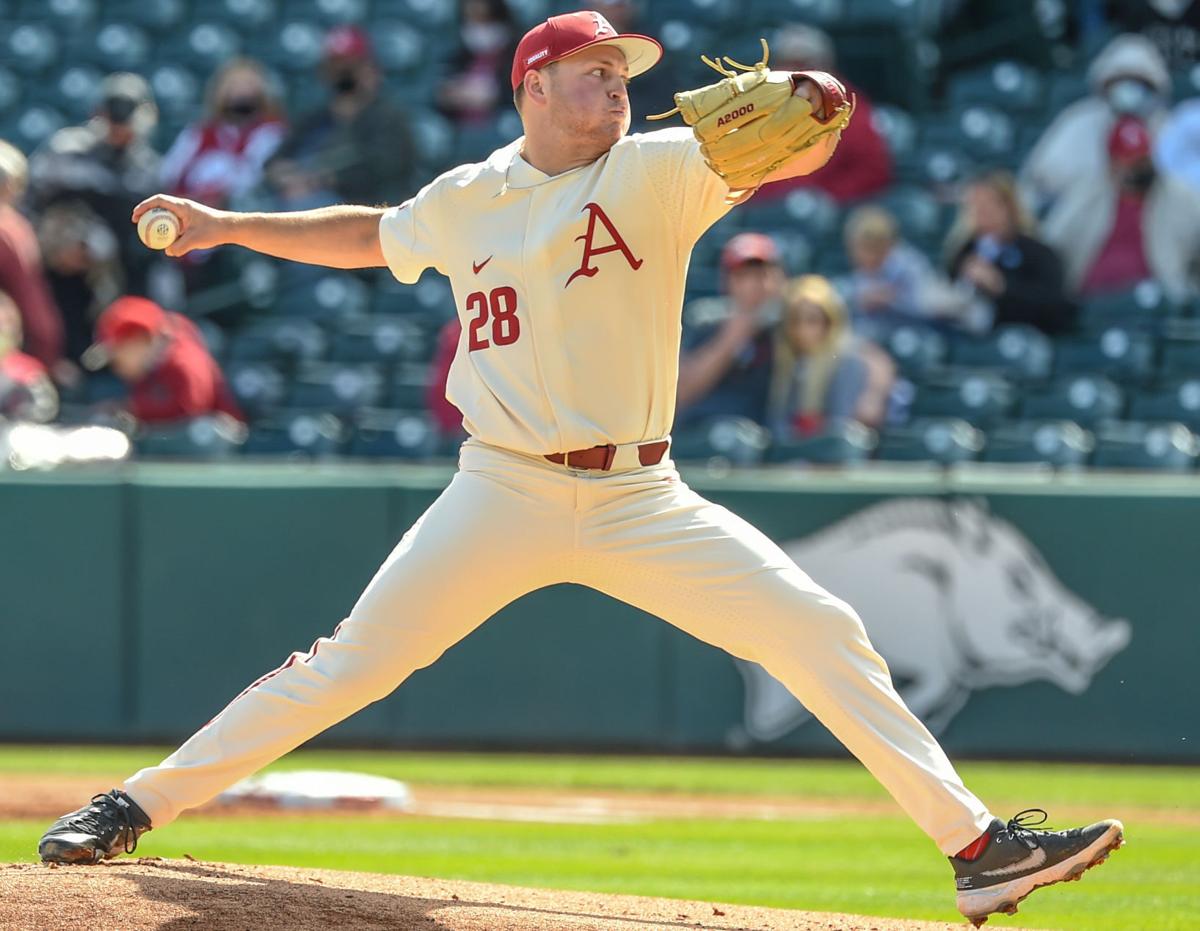 The nationally No. 1, 32-7 overall 13-5 SEC West Razorbacks were supposed to host the Missouri State Bears Tuesday night at Baum-Walker Stadium.

However the game was cancelled because of covid-19 issues within the Missouri State program.

Van Horn sought another opponent to bring Tuesday to Baum-Walker but had found no takers upon completing Friday the Hogs taking 2 of 3 in a SEC series from the nationally 11th-ranked South Carolina Gamecocks in Columbia.

“We haven’t found anybody that will volunteer to come over and play us,” Van Horn said Friday night in Columbia, S.C. “We’re not going to travel, especially after this trip, to go play a game.”

Against the Gamecocks, with the series condensed to a Thursday game and Friday doubleheader because of a rainy Saturday forecast after the Hogs played a Saturday doubleheader and Sunday taking 2 of 3 the previous weekend from Texas A&M at Baum-Walker, Arkansas opened with No. 4 starter Caleb Bolden on Thursday and on short rest threw No. 2 and No. 1 starters Peyton Pallette and Patrick Wicklander in Friday’s day-night doubleheader.

Now for the Friday 6 p.m., Saturday 6:30 p.m. and Sunday 2 p.m. games in Baton Rouge Van Horn in a well-rested order can go Wicklander, Benton’s Pallette and No. 3 starter Lael Lockhart.

“We’re going to need it (the week’s rest) against LSU, because they can swing the bats, and they’re tough at home,” Van Horn said. “Wicklander would have a full week of rest, so Friday he’d be back on track.

If Van Horn could guarantee the Hogs would pitch as well on short rest in Baton Rouge as they did in Columbia he and pitching coach Matt Hobbs would spend the week wearing the starters out.

“Just a really good job by our pitchers all weekend,” Van Horn said postgame Friday in Columbia. “For the most part all three games they gave us an opportunity to win.”

In Thursday’s 6-1 victory, Bolden yielded but two hits and a run through 3 1-3 innings.

Relievers Ryan Costeiu, Caden Monke, the pitcher of record winner after inducing a popped up bunt and doubleplay grounder for the two batters he faced, and Kevin Kopps, nine up and down including five strikeouts for his three-inning save, excelled Thursday.

Pallette pitched shutout ball for 5 1-3 and was up 2-0 when removed after a 1-out walk and single in the sixth before reliever Monke, walking the one batter he faced during the 4-run inning, was charged with the 6-2 loss.

“Peyton Pallette pitched really well – five plus,” Van Horn said. “You take away maybe one walk, two walks, I think the outcome might have been a little bit different.”

Lefty Wicklander against the predominantly right-handed Gamecocks, allowed but two hits and one run through seven innings. He struck out five against no walks.

“Really three good outings for Wicklander in a row,” Van Horn said. “He threw everything for a strike. Got some first-pitch outs and it allowed him to stay in the game and kept Kevin’s pitch count down.”

“I thought Casey called a great game,” Van Horn said. “We didn’t mess with Casey too much. Him and Pat were working great together and we let them roll.”

Nobody rolled like Kopps Friday night. Pitching the eighth and ninth while notching his second save of the series, Kopps faced six batters. He struck them all out.

“For all weekend he was amazing,” Van Horn said.

“That was a huge swing for us because we were just up one before that swing,” Van Horn said. “That’s when you could start thinking how many more outs do we need before we can go to Kevin?”