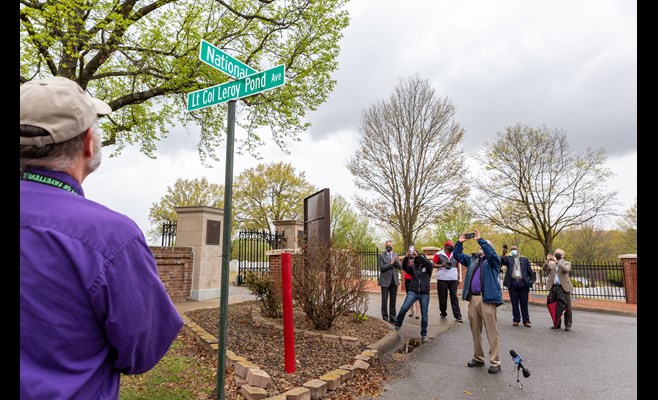 Richardson, himself, was unable to be in attendance due to his family’s health and the ongoing pandemic. He was able to view the ceremony virtually and speak to the crowd via a recorded message.

The idea to honor the hall of fame basketball coach was brought forth by Fayetteville Councilman D’Andre Jones last month after discussions with the University of Arkansas Black Alumni Society and others on campus. The Fayetteville City Council approved the name change at a meeting on March 16.

Pond’s legacy is now honored with the naming of the road leading to the Fayetteville National Cemetery. Pond was a World War II veteran who participated in D-Day and was honored with a Silver Star, a Purple Heart and other awards for his bravery in battle.

He was later wounded in Germany and passed away in 1945. His memory lived on as the original Leroy Pond Drive was a road leading into Camp Leroy Pond, which was a housing complex south of where Bud Walton Arena sits today, used for students who were returning home after World War II.

About the University of Arkansas: As Arkansas’ flagship institution, the U of A provides an internationally competitive education in more than 200 academic programs. Founded in 1871, the U of A contributes more than $2.2 billion to Arkansas’ economy through the teaching of new knowledge and skills, entrepreneurship and job development, discovery through research and creative activity while also providing training for professional disciplines.

Springdale council must determine where to spend grant funds