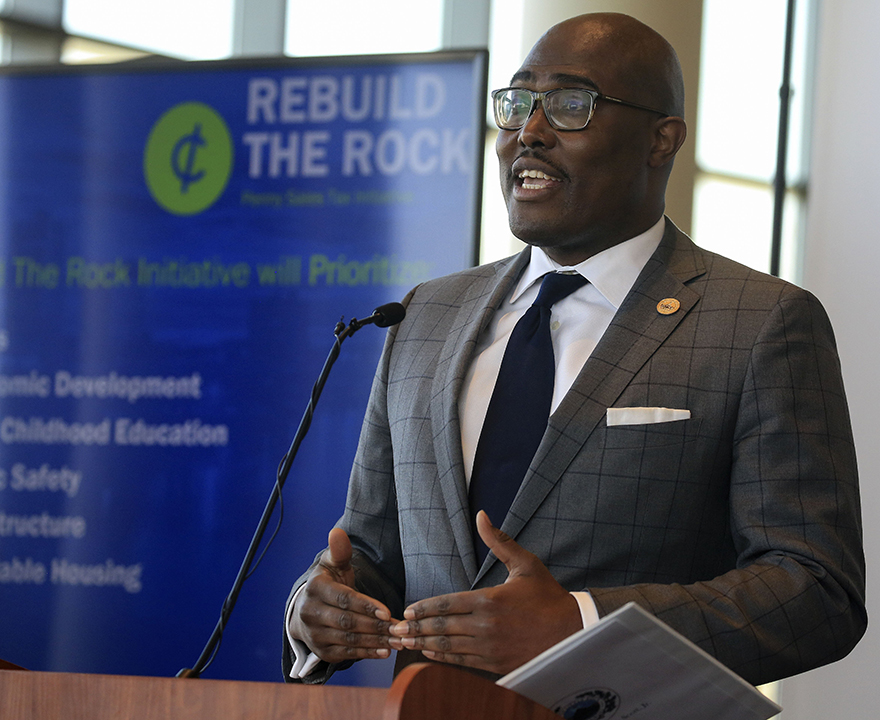 FAYETTEVILLE, Ark. – The chief of staff for Mayor Frank Scott Jr. indicated that a referendum on the mayor’s “Rebuild the Rock” sales-tax increase would have to take place no later than 120 days after the date established by a special-election ordinance.

That means the city would have to secure voter approval by November under the new timeline established by the city board. Members recently chose to delay action on the mayor’s proposal.

Scott has proposed a permanent 1 percentage-point sales-tax increase beginning in 2022 to fund quality-of-life projects with about $53 million in new annual revenue. The overall sales-tax rate in Little Rock would increase to 9.625% if voters grant approval.

In a meeting Tuesday, Little Rock city board members chose to table Scott’s tax package until July. Scott had asked them to approve a July 13 special election.

If the board approves the election during its July 13 meeting, a referendum would have to take place by mid-November, though board members could approve an earlier date.

After the meeting Tuesday, Scott suggested to reporters that an election would now have to take place in September.

“By delaying the vote to July 13, it only gives us a few more months left to pass a tax,” he said.

In an email, chief of staff Charles Blake cited Arkansas law that says an election must be held within 120 days from the date when the local governing body sets the election.

Special elections that do not fall on the date of a preferential primary or general election must be held no fewer than 60 days after the date the special-election measure is filed with the county clerk, under the law.

Because special elections must be held on the second Tuesday of the month (except months when a primary or general election is scheduled), based on those parameters, a city election on the sales-tax increase could be held on Sept. 14, Oct. 12 or Nov. 9.

The Arkansas Legislature approved new restrictions on when special elections can be held during the most recent session.

Starting next year, in an even-numbered year like 2022, special elections that do not coincide with the routine elections in May and November can be held only in February or August.

Representatives for the mayor did not immediately respond when asked about the specific election date Scott plans to pursue.

Also complicating the timeline is the fact that the city has opted to sunset a decade-old three-eighths-percent sales tax used to fund capital improvements. The tax will expire at the end of December.

The decision to let the tax expire would reduce the overall tax burden on residents in light of the proposed 1 percentage-point increase. But it puts additional pressure on the city to approve a sales-tax increase of some kind later this year before the 2011 tax expires, taking with it a stream of revenue.

The expiration of the capital-improvements tax “effectively takes our 9% tax rate to … 8.625%, which makes us the lowest in the state of Arkansas,” Scott told reporters Tuesday.

City directors, led by Kathy Webb of Ward 3, voted 8-2 to delay action on the tax package for two months after Webb expressed concerns about the effect of forthcoming stimulus dollars from the federal government. Little Rock is set to receive more than $37 million because of the American Rescue Plan Act, with the first half of the money expected to arrive within days.

She added that residents have expressed a desire for additional specifics in the proposal and more discussion of a sunset date.

How the FBI assists Arkansas law enforcement during investigations