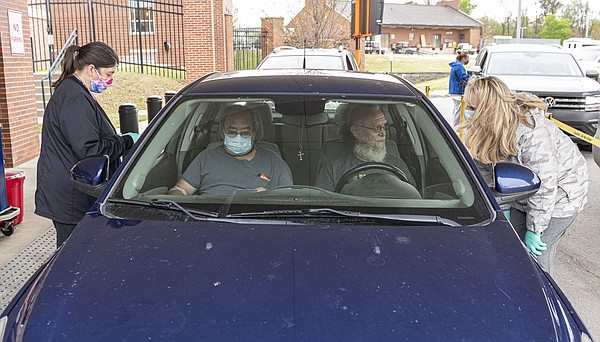 FAYETTEVILLE, Ark. – The covid-19 vaccination rollout in Northwest Arkansas will continue without delay despite the national pause in administering the Johnson & Johnson vaccine, health professionals and clinic organizers say.

The majority of shots going in arms in the region have been Pfizer or Moderna. But residents who got the Johnson & Johnson shot, which is one dose, shouldn’t worry, doctors say.

Veterans Health Care System of the Ozarks in Fayetteville has given about 24,000 Moderna and Johnson & Johnson doses to veterans and their families, according to Crystal Davis, public affairs officer. The hospital stopped administering the Johnson & Johnson doses following a U.S. Centers for Disease Control and Prevention and Food and Drug Administration announcement Tuesday.

Six cases of a rare and severe type of blood clot were reported out of about 6.8 million people who had received the Johnson & Johnson vaccine. Federal authorities recommended a pause to allow time for further research.

Gov. Asa Hutchinson said the state would follow the recommendation, and any Johnson & Johnson vaccines would be replaced with Pfizer or Moderna shots.

The veterans hospital in Fayetteville says it has enough Moderna shots to make up for the Johnson & Johnson shots. Veterans Health Care System of the Ozarks has been administering about 1,300 shots weekly during its Monday through Friday drive-through clinics and Saturday walk-in clinics, Davis said.

Benton and Washington counties had 84,042 residents fully vaccinated against covid-19 as of Friday, while another 62,896 had received the first of two doses, according to the Arkansas Department of Health.

The two counties have a combined population of 384,234 residents 16 and older, so about 22% of that group have been fully vaccinated while about 16% are halfway there.

On Tuesday, Community Clinic partnered with the Northwest Arkansas Martin Luther King Jr. Council for a vaccination event at the Rogers Convention Center. The plan was to administer 500 doses of the Johnson & Johnson vaccine. Following the announcement that morning, Community Clinic worked with the Northwest Arkansas Council and local health providers to replace the doses with Pfizer, Semingson said.

Community Clinic also has a mobile unit that was using Johnson & Johnson. The unit goes where it’s likely to catch groups of people, such as the Office of Motor Vehicle and homeless encampments or shelters.

The single-dose Johnson & Johnson vaccine was especially helpful for vaccinating people experiencing homelessness, said Jessica Andrews, chief executive officer of 7 Hills Homeless Center in Fayetteville. Residents living outdoors or in shelters have difficulty traveling, so getting a second shot within a few weeks can prove difficult, she said.

A recommended second shot for the Pfizer vaccine is about three weeks, and for Moderna, it’s four weeks, according to the Centers for Disease Control and Prevention.

“I know there’s a window, and it doesn’t have to be exact, but even so, that puts a lot more pressure on Community Clinic or whomever to be available frequently to catch everybody,” Andrews said.

The University of Arkansas administered 4,050 Johnson & Johnson doses to students at the time of the pause, leaving 850 doses in storage, according to Zac Brown, assistant director of communications with the Pat Walker Health Center. There are 25,847 total students enrolled this semester.

The announcement leaves the university without an on-campus vaccine option for students, he said. Past mass clinics were held at Reynolds Razorback Stadium. School officials are exploring ways to provide a Pfizer or Moderna option, Brown said. The last day of classes for the spring semester is April 29, with final exams happening May 3-7.

Symptoms such as fever, muscle aches or headaches within a day or two of receiving the shot are normal, she said. If someone experiences severe conditions such as extreme headaches, abdominal pain or shortness of breath two to three weeks after receiving the shot, medical attention should be sought.

The chances of experiencing those symptoms weeks after getting the Johnson & Johnson vaccine are highly unlikely, Sharkey said. Based on cases discovered thus far, blood clotting is even rarer, she said.

“You’re more likely to be struck by lightning,” Sharkey said.

Not enough information is known yet about the six women who experienced blood clotting after receiving the shot, she said. Factors such as smoking or taking birth control or having a rare genetic predisposition all could have played a role in their reactions, Sharkey said.

Opportunities to get vaccinated will continue next week in Northwest Arkansas.

So far, covid-19 has killed 756 people in the two counties, according to Health Department data.

Arkansans slower to get vaccinations