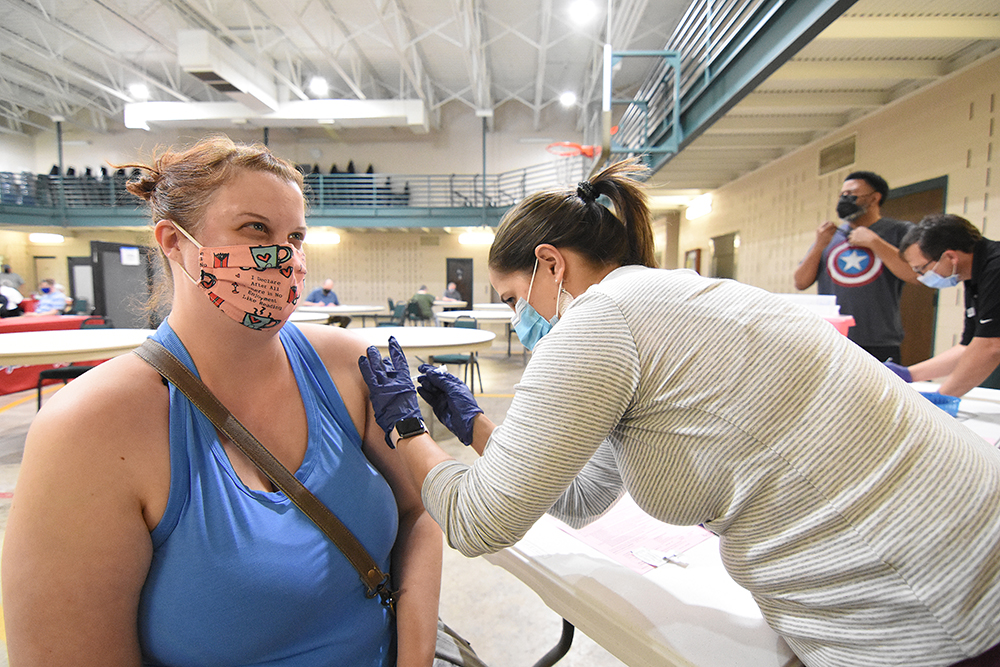 “We saw an increase of nearly 25,000 vaccines [today], which continues a good week,” Hutchinson said. “We’re on target to reach our 1 millionth shot next week, [and] this is very encouraging.”

State epidemiologist Jennifer Dillaha clarified in an interview Saturday that Hutchinson meant 1 million Arkansans will have received one or both shots by this week.

As of Saturday, 619,019 people statewide had received both doses of the two-dose vaccines, and 341,133 people had received one dose, for a total of 960,152, according to state Health Department data.

The state had been administering the one-dose Johnson & Johnson vaccine since March 8 after the U.S. Food and Drug Administration approved the vaccine for use at the end of February.

However, the state stopped administering that vaccine last week when the FDA and the U.S. Centers for Disease Control and Prevention recommended its pause because six people in the U.S. who received a dose later developed rare blood clots.

Arkansan Hugh Perkins was all set to administer a few hundred Johnson & Johnson doses when “they pulled it,” he said.

He gives vaccinations only from Tuesday to Thursday because of current supply and demand, he said.

Recently, the pace of vaccinations in Arkansas slowed for several days before increasing from 23,066 to 24,840 from Friday to Saturday, according to the Arkansas Department of Health.

Dillaha said one reason for the slowdown is that some Arkansans “have questions about the vaccine and want more information before they get vaccinated.”

She encouraged anyone with questions to talk to a doctor or nurse “to get good factual information and make an informed decision.”

The Health Department reported 221 new covid-19 cases Saturday, 16 fewer than Friday. However, Saturday was the third daily increase in a row that was bigger than the one a week earlier. There were 171 new cases reported Saturday, April 10.

Active cases have risen daily since Tuesday, with 68 new ones Saturday. Dillaha said this is especially concerning in light of the Health Department identifying more contagious covid-19 variants in the state.

“They’re called variants of concern because they are spread more quickly and easily, and that could lead to more cases, hospitalizations and deaths,” Dillaha said. “So that is something we are trying to make sure people are aware of, and also [to] encourage people to continue practices that would minimize the spread of covid-19 in Arkansas.”

After rising Wednesday and Thursday, the number of Arkansans hospitalized with covid-19 fell Friday by one, to 152, and rose again Saturday to 153, the same number as Thursday.

Five more people were on ventilators Saturday than Friday for a total of 20, after two consecutive daily decreases of patients on ventilators, according to Health Department data.

On Saturday, Pulaski County had the most new covid cases for the third day in a row with 38, after 31 Friday and 35 Thursday. Lonoke County had 22 new cases, Washington County had 20, and all other counties had fewer, according to Health Department data.

The Health Department reported one new covid-19 death Saturday. A total of 5,693 Arkansans have died of covid-19 since the pandemic began.