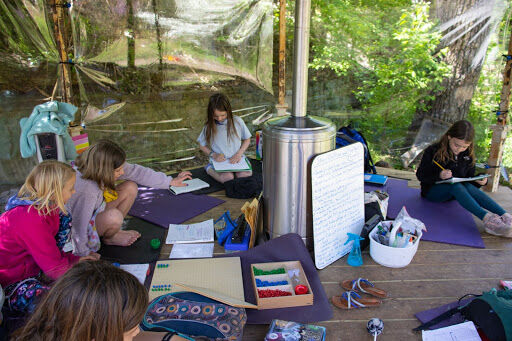 FAYETTEVILLE, Ark. – In a backyard just blocks from downtown Fayetteville, there is an educational utopia of sorts. Elementary school students spend their days with the sun on their faces and the breeze in their hair. During their hour-long recess, they sprint and scamper across grass, mulch and mud. They weave between trees laden with vibrant blossoms that flutter through the open-air spaces where they study.

Aided by ample space to spread out, the students and their teachers freely and happily breathe fresh air, only wearing masks if they enter the basement that houses a restroom, kitchen and occasional one-room schoolhouse. Their “classrooms” include a wooden gazebo and pavilion, a vegetable garden and a fire pit surrounded by stumps and situated by a babbling brook.

At the Bodark Nature School, situated in the 0.8-acre terraced backyard of Jerry Elizabeth “J.Liz” Griffith’s Dickson Street home, 20 children ages six to 12 spend nearly eight hours a day outside, studying naturalism, math, English, history and more. The outdoor school was founded nearly a year after Griffith, a Fayetteville defense attorney and mother of three, first contemplated its creation. She wanted children to learn to respect nature and the value environment by being fully immersed in it.

“I think that we have this misnomer that learning happens because we teach people,” Griffith said. “But there’s so much intelligence in nature that science and math, even literature, art, it all sort of begins in nature.”

Griffith, in collaboration with three other concerned mothers, created Bodark in fall 2020, hoping to create a pandemic safe haven for their children at the “community homeschool,” which functions like a cross between a homeschooling cooperative and a Montessori academy. Now, inspired by the year’s success, they are looking toward a more expanded, established future.

Griffith struggled for years to find the right educational fit for her children. Although the older two had gotten good grades in public school, they were not thriving socially. After homeschooling them alone for a year and hating it, Griffith joined a forest school co-op near West Fork in 2019.