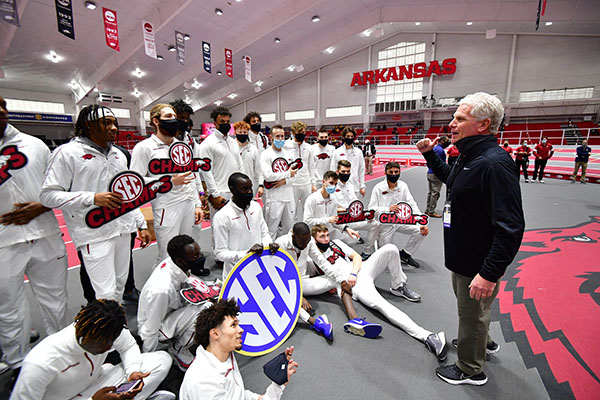 FAYETTEVILLE, Ark. — The University of Arkansas winning his and hers titles at the SEC Indoor Outdoor Track and Field Championships Saturday at the Randal Tyson Center was nothing new.

It was the eighth time the Razorbacks have swept SEC indoor titles since 2000 and second year in a row.

Since joining the SEC for the 1991-92 school year, Arkansas has enjoyed a combined 28 conference championship sweeps in cross country and indoor and outdoor track and field.

But there was something different about the Razorbacks’ latest championship sweep.

The men’s and women’s teams usually celebrate together, but they had to call the Hogs separately this time.

After Arkansas’ men’s team won its 24th SEC indoor title in 30 years, the athletes had to leave the Randal Tyson Center because of coronavirus safety protocols.

Arkansas’ female athletes couldn’t be there to cheer on the men before the women’s portion of the meet started in the evening.

No fans were allowed to attend the meet for safety reasons.

“As I tried to explain to some of our newcomers, if this was a normal SEC meet and we had fans, there’d be 5,500 people in the building and one side of stands would be yelling ‘Arkansas’ and the other side would be yelling ‘Razorbacks’ during the races,” said Lance Harter, who has won 40 SEC titles as Arkansas’ women’s cross country and track and field coach, including 11 indoors. “I said, ‘It gives you chills down your back.’

“So not having that experience with our fans was sorely missed.”

Chris Bucknam, who has won 23 SEC titles as Arkansas’ men’s cross country and track and field coach, said not having fans at the conference meet felt strange.

“There’s no question our fans give us a home advantage calling the Hogs and having that energy in the building,” Bucknam said. “We missed that. We were the home team, but it really was a neutral site without our fans.”

“We were still able to get the SEC trophy and championship t-shirts and the hats,” Harter said. “Our kids were happy about that.”

Harter and Bucknam made sure to acknowledge the leadership of SEC Commissioner Greg Sankey, who attended the meet and presented the championship trophies.

“I introduced the commissioner to the team, and I said, ‘Ladies, you have to understand, this gentleman made this all possible because he never flinched that the SEC could still have indoor track,’ ” Harter said. “He stuck by his guns the whole way.”

Sankey is credited with taking a deliberate approach on whether to hold sports during the coronavirus pandemic when some other conferences quickly made decisions to cancel sports’ seasons.

“I was glad to have the opportunity to thank Greg Sankey when we got our trophy,” Bucknam said. “This wouldn’t be happening without our commissioner. It’s not a small thing what he did.

“When a lot of conferences decided not to have sports, he showed great leadership and found a way for the SEC to compete in our sports.”

Women’s Basketball Falls at No. 16 Arkansas to End Regular Season

Saturday’s Game Vs. Murray State To Start At 1 P.M.