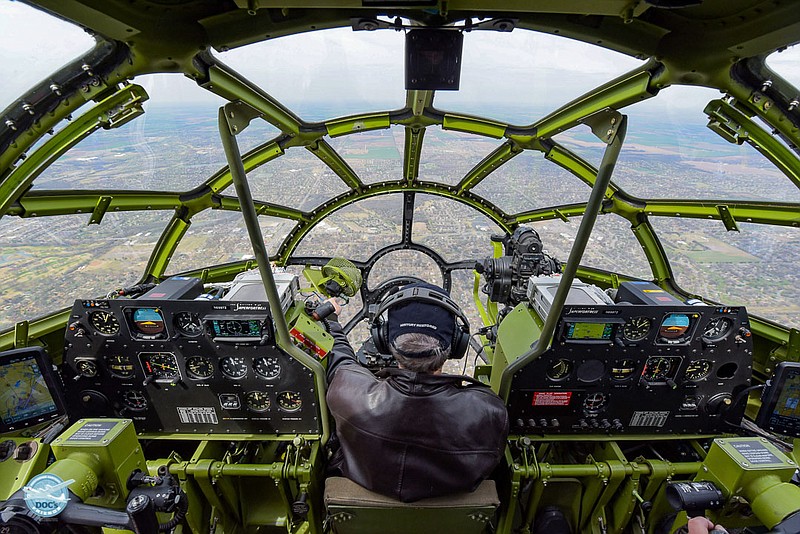 FAYETTEVILLE, Ark. – The B-17 Flying Fortress and its cousin, the B-29 Superfortress, have some basic things in common. They are both huge airplanes, and both were built for U.S. bombing missions during World War II.

“Designed by the Boeing Company and first flown in 1935, the B-17 was the largest land-based plane in the world at the time,” says Nancy Kwiecien, executive officer of the Commemorative Air Force Gulf Coast Wing. “Although early World War II operations saw B-17s in every theater, the big bombers were primarily employed by the United States Army Air Forces in the daylight precision bombing campaign against German industrial and military targets.

“The B-29 is a newer, much more sophisticated aircraft. It’s pressurized, and carries more advanced weaponry and is much larger,” she compares. “The B-17 has a 104-foot wingspan; the B-29 wingspan is 141 feet. Although designed only five years after the B-17, the B-29’s advanced design allowed it to remain in service in various roles throughout the 1950s, while the B-17s were obsolete by the end of the war.”

“The B-29 Superfortress was primarily used in the Pacific Theatre and was the aircraft type that delivered the two atomic bombs to Japan,” Josh Wells picks up the story. He is the executive director of Doc’s Friends, a Wichita, Kan.-based nonprofit “whose mission is to honor the men and women who designed, built, flew and maintained B-29s during World War II.”

Both Doc, a B-29 built in 1945 by the Boeing Co. in Wichita, and Texas Raiders, the third to last B-17 completed at the Douglas Aircraft factory in Long Beach, Calif., on July 12, 1945, will fly into Fayetteville Labor Day weekend for a three-day event at the Arkansas Air & Military Museum at Drake Field. It is, according to museum director Laci Shuffield, the first time the two organizations have come together to showcase their historic planes, also including a T6 Texan and a twin engine Beech Navy transport.

“This event is going to be a big deal for Northwest Arkansas,” says Matt Younkin, a member of the museum board. “For the first time ever, warbird fans in Fayetteville will have the unique opportunity to see the aircraft that helped deliver the final punch to end the war in Europe, along with the aircraft that led to the surrender of Japan in the Pacific. It’s going to be something special.”

Although “she” comes from a proud tradition, Texas Raiders was essentially obsolete the moment she came off the assembly line.

“Most military aircraft built at the very end of the war were flown directly to the scrap yard,” says Kwiecien, “but Texas Raiders was given a reprieve. On July 16, 1945, the U.S. Navy selected 20 brand new B-17s for re-designation as PB-1Ws, the first successful form of Airborne Early Warning and Control (AWACS) aircraft.

“Starting in 1946, these aircraft served as first line RADAR early warning platforms, and Texas Raiders was one of the very first aircraft in the world to serve in that capacity, keeping watch from bases on the East Coast and Hawaii in the early days of the Cold War,” Kwiecien continues the story. “She was retired from the Navy in 1955. In 1957, the Litton company’s Aero Service division purchased Texas Raiders and used the aircraft as a high-altitude mapping, survey and photographic platform. In 1967 a deal was struck with the fledgling Commemorative Air Force, and Texas Raiders came to the CAF in south Texas.”

Kwiecien says Texas Raiders has since been restored to her original B-17G configuration, “and for over 50 years has been supporting the CAF mission of education, inspiration and honor at events where young and old alike can put their hands on history.”

Doc had a longer military career — and suffered a worse retirement.

“Doc was delivered to the U.S. Army Air Corps in 1945 and was assigned to a radar calibration squadron in upstate New York,” Wells starts the story. “The squadron was known as the ‘Snow White Squadron,’ and there were nine aircraft — Snow White, the Seven Dwarfs and the Wicked Witch. After serving 10 years, Doc was retired from active flying — and was sent to the U.S. Naval Station at China Lake, Calif., where it was used as a missile target.

“After five decades in the Mojave Desert, Doc was rescued by a team of volunteers and then shipped to Wichita for restoration,” Wells goes on. “Hundreds of volunteers worked 16 years — from 2000 to 2016 — to restore the airplane to airworthiness. More than 450,000 volunteer hours were put into the restoration project.

“In February of 2013, a group of Wichita aviation enthusiasts and business leaders, led by retired Spirit AeroSystems CEO Jeff Turner, formed Doc’s Friends, a 501(c)3 nonprofit, to manage the restoration project and help see it through to completion.”

Having saved the planes, keeping them airworthy is no small job, agree Wells and Kwiecien.

“Parts for a B-29 Superfortress must either be restored or remanufactured and fabricated, which drives a lot of cost,” Wells explains. “In all, it costs about $8,000 to $10,000 per flight hour to maintain and operate the warbird. This cost includes fuel — which is about $3,000 per hour — along with insurance, maintenance costs and aircraft reserve.”

“Warbirds are a specialized subset of aviation and require expertise in their particular kinds of airframes, engines and operational systems,” adds Kwiecien. “The B-17 requires at least 30 hours of maintenance for each hour in the air. [But] the aircraft ‘wants’ to fly. Keeping it in the air is good for it; sitting is bad for it, just like your car. A comprehensive program that includes rigorous inspection and preventive maintenance routines keeps it flying safely and efficiently.”

Both planes will take passengers up in the air during their stay in Fayetteville.

“These aircraft are noisy, and windy inside because they are not pressurized,” Kwiecien says of the B-17. “You feel the roar of the huge radial engines in your chest when they start up, experience the wind as it barrels through the fuselage, and feel the vibration of the aircraft under your feet as it lifts off.”

In the B-17, passengers are allowed to stand up and walk around inside the aircraft when it’s in flight, and may approach the big windows on either side of the aircraft, Kwiecien says. Flights start at $475 for the B-17 Flying Fortress.

Wells says each flight experience with Doc lasts about 90 minutes and includes a history lesson, a crew briefing and a 30-minute flight. Prices start at $600.

But that doesn’t mean both planes aren’t inspirational — and much more accessible — on the ground.

“Traveling with Doc is a truly unique and humbling experience,” Wells says. “It’s inspiring to meet World War II veterans and listen to their stories about B-29 service. I’m honored to ensure we never forget the sacrifice of the Greatest Generation.”

“I love getting to meet the veterans and the families of veterans,” agrees Kwiecien. “Although the World War II vets are leaving us very quickly now, at each city we usually meet one or two. And it’s a special privilege to introduce someone to the aircraft that their dad or granddad served in.”