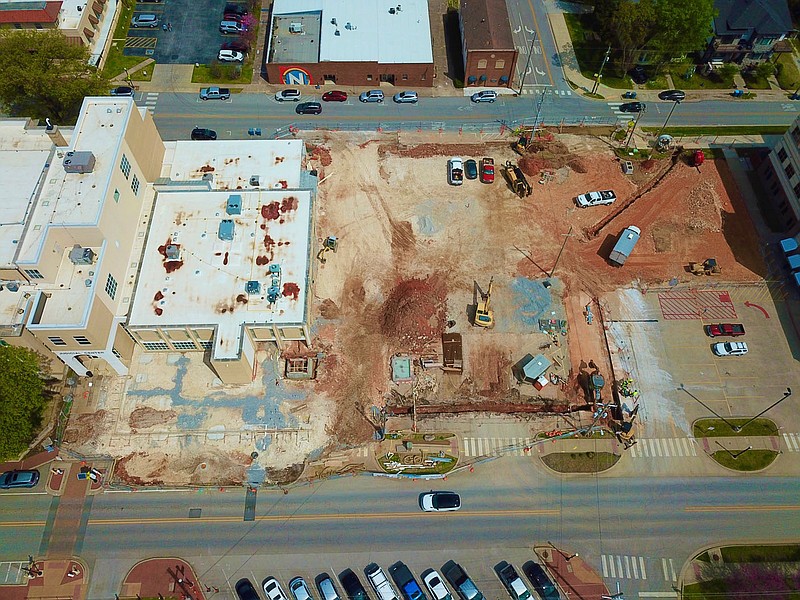 BENTONVILLE, Ark. — A $485,000 grant from the Walton Family Foundation will help beautify the area between the Benton County Courthouse and the County Administration Building, according to a news release.

The grant will pay for landscaping and improvements to the parking area between Northeast Second Street and East Central Avenue.

Justice of the Peace Susan Anglin said the grant is a generous gift to county residents and visitors to Bentonville that will create a more park-like area. It will provide a place for county employees to enjoy at lunch or break times, she said.

“I so appreciate the plans to enhance these common areas that so many can enjoy during days that are often filled with stress,” she said.

Bryan Beeson, county facilities administrator, said the north half of the parking lot should be opened by the middle of June. The parking lot will have 72 spaces when finished, he said.

“The Benton County Circuit Courts and the County Administration Building serve the nearly 280,000 Benton County residents, but this parking lot is available for anyone to use after county business hours,” County Judge Barry Moehring said in the release.

Enhancements include brick pavers along the surrounding sidewalks, flowering shrubs, evergreen shrubs, perennial mixes as well as maple trees and benches and additional planters, according to the release.

Most of the plantings will take place in late summer or early fall, Beeson said.

“The landscape and sidewalk improvements to the county’s parking area will enhance the pedestrian and cycling experience in a downtown public space and help build a visually cohesive streetscape,” said Alison Jumper with the Walton Personal Philanthropy Group.

The county is in the midst of a $3.1 million courthouse expansion, which has taken away some parking between the two buildings. Construction began Feb 1. The steel structure of the courthouse addition is under construction, Beeson said.

The expansion will add 5,500 square feet to the 28,000-square-foot courthouse and provide a new courtroom for Christine Horwart, who became the county’s seventh circuit court judge in January.

The Benton County Courthouse’s south entrance on East Central Avenue closed Jan. 29 in anticipation of construction. The front doors, at the top of a 16-step staircase on the building’s west side, are the only public entry into the courthouse.

Anyone who cannot walk up the front steps can call (479) 268-9611, and a Sheriff’s Office deputy will allow them to enter through a door on the building’s north side used by employees.

The plan will stay in place until the new courthouse opens in the fall, he said.