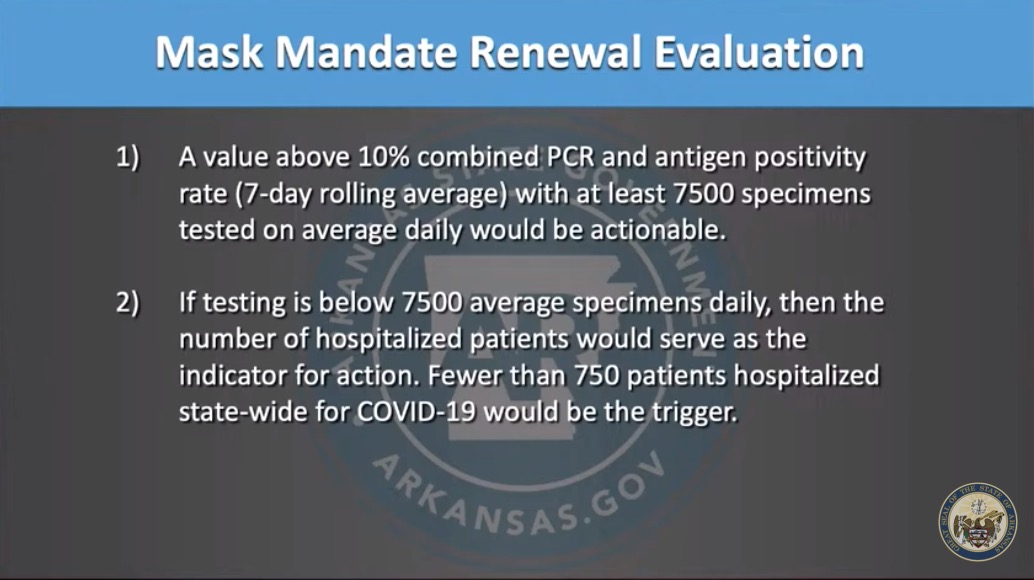 FAYETTEVILLE, Ark. – Arkansas governor Asa Hutchinson on Friday announced he will extend his state public health emergency declaration for one month, while also downgrading several safety measures related to the pandemic to “guidelines” instead of directives.

The governor’s emergency declaration on the virus was due to expire on Feb. 27.

Hutchinson said the statewide mask mandate would remain in place for now, but will expire at the end of March “if certain public health goals are maintained.”

The mask mandate will be re-evaluated if the state maintains 7,500 tests per day with a combined positivity rate of better than 10%, or if 7,500 tests per day are not administered, then the governor would consider extending the mandate if the number of Arkansans hospitalized was more than 750 individuals.

Hutchinson said moving all other directives related to the pandemic, which include occupancy limits for businesses, to guidelines would allow businesses some flexibility to make adjustments to how they are operating.

The governor said he did not expect consumer behavior to change much with the move, adding that liability protection for businesses would still depend on them following the guidelines.

The governor said the changes don’t change the necessity of quarantine and isolation, as those requirements are part of the emergency order extended today.

He said if cases were to begin increasing again, the guidelines could again be reinstated as mandates.

The governor said he was announcing the moves citing progress in the pandemic, including lower numbers of active cases and hospitalizations recorded in recent weeks.

Cases have ticked higher this week, as testing has increased after low numbers of testing conducted during last week’s winter storms resulted in very low new case numbers recorded last week. Active cases (+44) and hospitalizations (+26) were up on Thursday, but both indicators had been in decline in recent weeks.

The governor has been under pressure from the Arkansas legislature to ease restrictions in the state. The legislature this week voted on a measure that would refund fines for violating public health guidelines, undermining the governor’s previously declared directives.

The resolution would make its way to the house for a vote after passing the senate on Thursday, but the governor said he would urge lawmakers not to pass the law, and indicated he would not sign such a measure should it make its way to his desk.

The governor acknowledged some of the impacts his announcement would have on local school districts, saying most districts have adopted their own board policies on masking and social distancing. The guidance on capacity will allow for proms, graduations, athletic events, and other extracurriculars. Quarantine guidance and identification of close contacts would remain unchanged.

A reporter asked the governor why, if you want the public to follow the guideance he would want to make it voluntary.

“At some point you have to move away from those directives, and this gives us a safe path to move forward following the guidelines, and if a business believes they can keep their customers safe and their employees safe and they want to tweak it because the guidelines don’t perfect fit their business, then there’s more flexibility with the guidelines than the directives and there’s not the enforcement and potential for a fine,” he said.