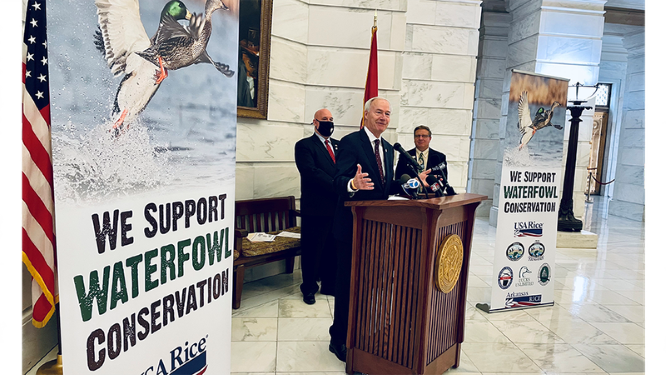 LITTLE ROCK, Ark. — Representatives from Arkansas Game and Fish Commission, Ducks Unlimited, the Arkansas Game and Fish Foundation, the Legislative Sportsmen’s Caucus and USA Rice stood in unison with Gov. Asa Hutchinson last Wednesday to announce the passage of House Concurrent Resolution 1014 in support of efforts to boost waterfowl and waterfowl habitat in The Natural State.

Gov.Hutchinson spoke about the connection between Arkansas’s agriculture and the natural resources responsible for much of Arkansas’s tourism and recreation industries.

“People are amazed when I tell them Arkansas produces over half of the nation’s rice, and then I tell them we are the duck hunting capital of the world,” Hutchinson said. “It’s all tied together, our rice fields, our flooded timber and the waterfowl hunting people enjoy in Arkansas.”

The resolution emphasizes the support from the General Assembly to conserve waterfowl and waterfowl habitat on public and private lands and encourages the Department of Parks, Heritage and Tourism to work with the AGFC to ensure priorities of the Arkansas Statewide Comprehensive Outdoor Recreation Plan include bottomland hardwood restoration projects that support waterfowl hunting opportunities.

The resolution is welcome news to sportsmen who hunt waterfowl in The Natural State. It comes at a time when the AGFC is facing its largest infrastructure challenge in the agency’s 106-year history. More than 100,000 waterfowl hunters each year enjoy hunting the iconic flooded timber and rice fields of Arkansas, contributing to the state’s economy nearly $1 million each day of duck season. With more than 50,000 acres of publicly accessible greentree reservoirs in wildlife management areas and a vast complex of rice farms producing wetland habitat across the state, Arkansas waterfowl hunters have some of the best public and private hunting opportunities in the nation.

Changes in water use, rain patterns and the most recent science have driven the need for extensive renovations. Flooding while the trees are not dormant has caused many beneficial species to die off and become replaced with more water-tolerant, but less wildlife-friendly species. The AGFC has begun a major campaign to renovate water-control structures, levees and drainages to change the way these important wetlands are flooded to give the trees relief from flooding and promote lasting waterfowl habitat. This campaign alone will require an estimated $50 million above and beyond current infrastructure budgets during the next 10 years  Continued partnerships with Ducks Unlimited and other conservation organizations will help make some of this plan a reality.