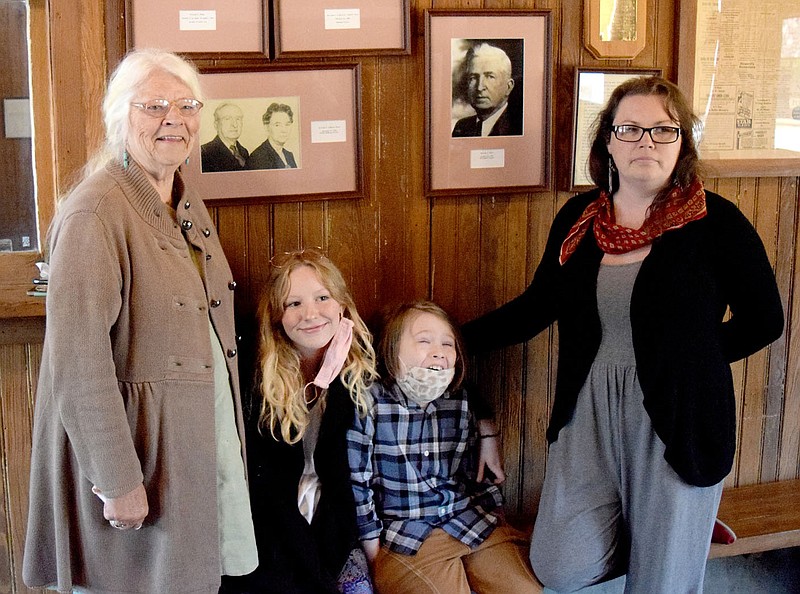 DECATUR, Ark. — In its heyday, railroad passenger and freight service carried goods and people across great expanses through the United States. Cities of every size from Chicago to Decatur had a train depot for merchants and passengers to catch, to transport merchandise and people to destinations across the country. In those depots lived a depot master to oversee these rail services.

William Hines was the station master at Decatur from August 1894 until his retirement on Oct. 30, 1937. In his 43 years in this position, Hines’ life, and that of his wife Mattie and eventually his children, revolved around the Decatur depot and the Kansas City Southern railroad.

A reunion of sorts at the depot happened on April 19 when three generations of William Hines descendants visited Decatur to check out the depot museum and to learn a little family history that dates backs well into the latter half of the 19th century. On hand to greet the visitors was Linda Martin, council representative for the Decatur Historical Commission, C.L. Abercrombie, Decatur historian, and Mike Eckels, chairman of the DHC.

At around 1 p.m., the welcoming committee greeted four visitors at the Decatur depot. Martha Hines Morgan, Hines granddaughter; Morgan’s daughter Chelsea Morgan Moon; Moon’s son Hunter; and Makyla Morgan, Moon’s niece; entered the 111-year-old depot. The simple act of walking through the depot’s front door triggered a mountain of memories for Martha Morgan, an early Decatur resident, thus opening a wealth of knowledge about Decatur history that was thought to be lost.

William Hines, along with his fellow station master, had a complex job that required personnel to be available 24 hours and day, seven days a week. Fortunately for the station master at the time, railroads ran on strict timetables. This was required to keep the trains spaced apart to avoid disastrous collisions and loss of life and revenue. Still many of the old depots had a separate living quarter either attached to the building itself or built on a second story. Decatur had no such quarter for Hines, whose family home was a block west of the depot, according to Hines Morgan.

Hines’ primary duties were to supervise the loading of freight on and off the cars, as well as selling tickets on, in Hines case, the Kansas City Southern passenger service which ran four trains a day through Decatur. Hines also worked the telegraph equipment which helped him communicate with the KCS dispatch systems as well as the trains themselves.

Hines was also required to fill out both freight and passenger manifests. These documents told the head train conductors what was being loaded on the train — in Decatur’s case apples, strawberries and other vegetables — and what cargo came off for Decatur merchants. The same process covered the passenger side as well.

One way to communicate to trains in transit was through the use of the telegraph. But if there was a sudden change in orders for train crews, the station master had another device at his disposal. This involved a Y-shaped device used to passage messages to the train crew directly. If the train was stopped at the depot, the station master would tie the new orders between the two upper parts of the device with a breakable piece of string and simply lift it up high enough for the conductors and engineers to grab off of the device. This was made more complicated when the station master had to hold the device high enough and far enough out so the crew can grab the orders with a long hook while moving through the depot.

Decatur’s original depot was a wooden structure, built in the late 1880s, that was about 100 yards north of the present one. In 1908 the structure caught fire and burned to the ground, which unfortunately was the fate of many of these old depots. In 1909 KCS began construction on the current concrete block depot and, by October 1910, Decatur had its second depot.

All this information, as well as that in the depot, was part of Chelsea Moon’s fact-finding mission since she is working on the Hines family history. The two kids, followed close by, soaking up as much information as possible about family history and about trains and the depot in general.

Meanwhile, Eckels, Abercrombie and Martin went to the depot’s waiting room to talk about the early days of the building and of Decatur itself with Martha Hines Morgan. Fortunately, Eckels took out his voice recorder and taped the conversation to add to the DHC achieves for future reference.

While touring the caboose to the south of the depot, a KCS switch train rolled past the depot and eventually stopped to pick up a few grain cars parked on the siding. The group was able to see a train stopped at the depot, just as they were when William Hines worked the station.

After about 15 minutes, the train pulled out of the station with a very loud bang and everybody returned to the front of the depot for departure. Martin took the Morgan party around Decatur, looking for the house that the Hines family once lived in.

It is very important for a community to remember its history through photographs, documents, and oral recordings. Thanks to people like Martha Hines Morgan, remembering the past is the best hope for a solid future.