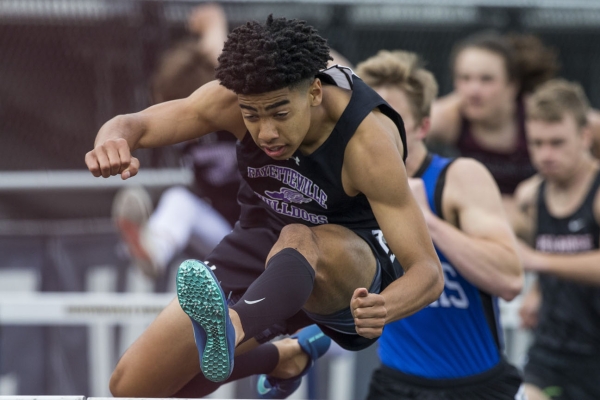 The speedy Sategna is one of five prospects inside the state in his class who have been offered by Sam Pittman’s Razorbacks. On Tuesday, Sategna talked about what the offer from the Razorbacks meant to him.

“To get an instate offer from Arkansas is crazy,” Sategna said. “Football is my main sport. Once I got that it’s crazy.”

Sategna, 5-11, 170, is a standout in both football as well as track & field. As a sophomore, he caught 36 passes for 700 yards and six touchdown for Fayetteville High School. With the offer from Arkansas he is starting to see some of the reward for the hard work he has put into sports.

“Yes sir, track definitely played a big part in that,” Sategna said. “The practice that I did over the summer also helps a lot.”

It’s obvious that track has helped him on the gridiron. Sategna set some state indoor track records earlier this spring.

He talked about the advantages of playing both sports.

While Arkansas has been down in football in recent years, Sategna is excited about the new coaching staff and the future of the Razorbacks.

“We haven’t been winning the past couple of years,” Sategna said. “But I know the program will turnaround. With these new coaches I really like this staff. I like Coach (Justin) Stepp and Coach (Sam) Pittman.”

Sategna’s father, Mario Sategna, came to Arkansas from the University of Texas on July 23, 2018, to coach the field events for Chris Bucknam’s program. Arkansas won the SEC Indoor Meet held this year.

“He was very excited,” Sategna said of his father. “It just helps so much having a coach just living with you. Being able to ask him if I have any questions. Just the atmosphere being around all the athletes. These guys that could go to the Olympics. It just helps a lot more.”

Sategna has obviously picked up some good tips and tidbits from his father, but also the athletes he has been around at the UA.

“My dad has this long jumper from the Bahamas, Laquan Nairn,” Sategna said. “He’s one of the best in the nation. He helps me a lot. Just stuff that he does. Just watching him jump he’s very good.”

Sategna also talked about what he feels like are his strengths and also areas he’s working on during this break due to COVID-19.

“Obviously my speed,” Sategna said. “I think tracking the ball too while it’s in the air. I’ve been trying to work more on my route running and then catching over this break.”