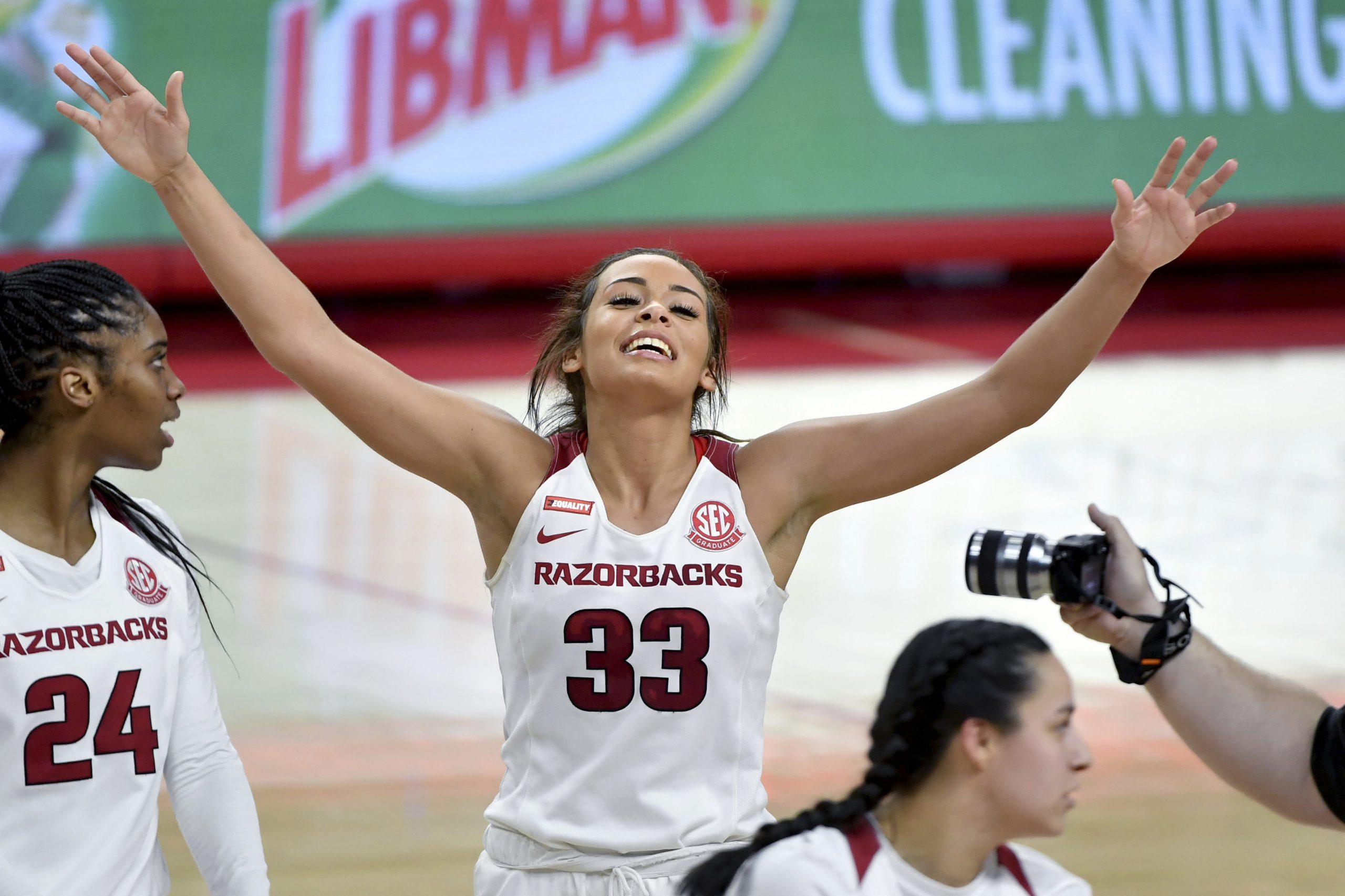 FAYETTEVILLE, Ark. — Chelsea Dungee admitted there will be a flood of emotions when she plays her final game today in Walton Arena.

But she’s hoping to channel that energy into helping the University of Arkansas finish the regular season on a winning note against Alabama in the game slated for a 5 p.m. start.

“It’s gonna be sad,” said Dungee, who has now scored more points in her college basketball career than any other Razorback. “I’ve thought about this for a few days. I love this place. I love the fans. I love this team.

“I’m gonna be a little teary, a little emotional, but we’ve still got a lot of season left and a lot of things we want to accomplish. I just want to go out with a bang in Bud Walton, just leave a legacy.”

The 5-11 guard from Sapulpa, Okla., already has done plenty. The two-time All-SEC performer has now scored 2,078 points in her collegiate career, surpassing Arkansas great Bettye Fiscus in the Razorbacks’ last game. Dungee has scored 1,834 of those points as a Razorback.

She is one of seven Razorbacks who will celebrate senior day this afternoon for No. 16 Arkansas. All of them, no matter how much they played, have helped move the program forward, Arkansas Coach Mike Neighbors said.

Jailyn Mason is the only one left from the five players who met Neighbors when he got the job in April 2017. Grayce Spangler and Macy Weaver were already signed by the previous coaching staff. Taylah Thomas came next, aided by her high school coach’s connection to the Razorbacks.

Dungee decided to transfer to Arkansas after her freshman year at Oklahoma. She talked Amber Ramirez into joining her in Fayetteville after Ramirez played two seasons at TCU. Destiny Slocum was the latest addition this season as a graduate transfer from Oregon State.

Senior day fanfare won’t take a backseat to the business at hand, Dungee said. Arkansas needs a win today to secure the No. 6 seed in the SEC Tournament.

The Razorbacks (18-7, 8-6) have won six of their past seven games, but they had to rally Thursday at Auburn for a 74-69 win. The Razorbacks trailed by as many as 10 in the second half, but they used a big fourth quarter to continue their late-season push for a top 16 seed in the NCAA Tournament.

“Jasmine Walker has had an SEC Player of the Year-caliber season,” Neighbors said. “They are long across that zone that limits some of your driving lanes. They can run multiple bigs at you. They got the blueprint that always concerns us.

“They have a bunch of veterans with a lot to play for.”

Ramirez said her time in college has flown by, but it’s been great.

“As a freshman, you go in there and you think it’s gonna last forever,” said Ramirez, who set a program record with 106 three-pointers made last season. “My last game in Bud Walton is gonna be bittersweet, but I’ll cherish the moment and the time I’ve had at Arkansas.

“It’s good to be a part of building something new for Arkansas and getting back to winning again.”

Dungee and Ramirez talked about playing at the same college when coming out of high school, but they ended up going against one another in the Big 12.

They reunited in Fayetteville and helped put the Razorbacks on the brink of an NCAA Tournament bid before last season was ended because of the coronavirus pandemic. Basketball is a part of their relationship, but it goes much deeper, Dungee said.

Dungee credits coaches, teammates and even the fans for making her feel comfortable at Arkansas.

“It’s allowed me to be who I am,” she said. “You have to be in a comfortable environment and that’s absolutely how I feel here.

“That’s something I’ll never forget because that’s really hard to come by. When you do find a family like that, you just never want to take that for granted.”

The seniors would have the option to return under NCAA rules this year because of the pandemic. Neighbors said he’s had preliminary conversations with a few, but nothing specific.

Dungee, who is averaging an SEC-best 22.3 points per game, has been listed as a WNBA first-round draft pick.

Thomas, who has started every game the last two seasons, isn’t sure about returning. Nursing school is in her future, and she will talk it over with her father soon.

But they will focus on basketball for now and one last game at Walton Arena today.