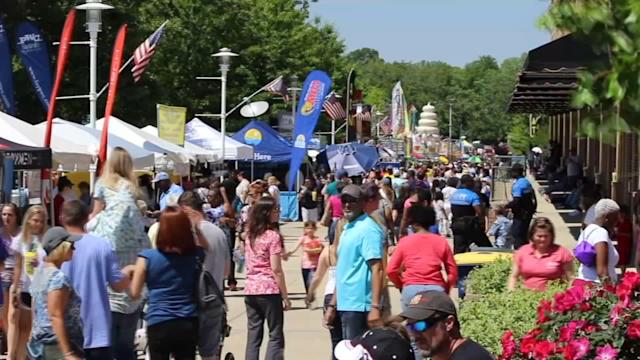 “The Dogwood Festival was a great success for our community and a giant step toward a return toward normalcy after more than a year of covid,” said Arthur Hulbert, president and CEO Siloam Springs Chamber of Commerce.

After a week that included rain, cold temperatures and snow, the weather during the festival turned out to be beautiful, Hulbert said.

Chamber staff members were blown away by the community’s response to the festival, according to Lindsey Taylor, Chamber director of community development.

Highlights of the weekend included daily live music, the car show on Saturday and the duck race on Sunday, Taylor said.

Around 100 cars lined up between City Park and Bob Henry park for the car show, which was a new event this year. The excitement seemed to draw a lot of people to the festival, Taylor said. Proceeds from the car show will support the local fire and police departments, Hulbert said.

The duck race, also a new event, drew more than 1,000 entries, Taylor said. Rubber ducks were dropped off the University Street bridge and floated down Sager Creek to the one-way bridge on North Maple Street. Each duck cost $5 and proceeds from the race will help support the Siloam Springs Chamber of Commerce Women and Minority Scholarship Fund and other local small business initiatives, Hulbert said.

Festival organizers put covid-19 safety precautions in place for the event to make sure people felt safe and comfortable attending, including providing hand sanitizer stations, recommending and providing masks and safety signage, Taylor said. ServPro was the event’s sanitation sponsor, cleaning frequently touched surfaces, including the attractions in the fun zone, she said.

The Chamber originally planned a perimeter fence around the festival to limit attendance, as required by state mandates in place at the time. When the mandates were discontinued, organizers decided to keep the fence in place and give visitors stickers to keep count of those in attendance, Taylor said.

By mid-day Saturday, volunteers had given out more than 20,000 stickers, Hulbert said. At that point, crowds were so large that volunteers stopped giving out stickers to focus on the safety of individuals trying to cross the street, he said. There were also at least three areas where the perimeter fence had been removed and opened by the crowds, he said.

Long-time vendors told Chamber staff that business traffic on Friday felt like a normal Saturday at the festival, and attendance on Saturday was almost double the usual crowd, Hulbert and Taylor said.

It takes a lot of people to make the Dogwood Festival happen and Taylor said she is grateful to the committee and volunteers, as well as sponsors who fund the event. The Chamber also has a great partnership from the city parks and recreation department, electric department and street crew, she said.

“I am incredibly thankful for the hard work and dedication of the many volunteers, sponsors, local business, vendors, city staff, and chamber staff team that made this event a success” Hulbert said.