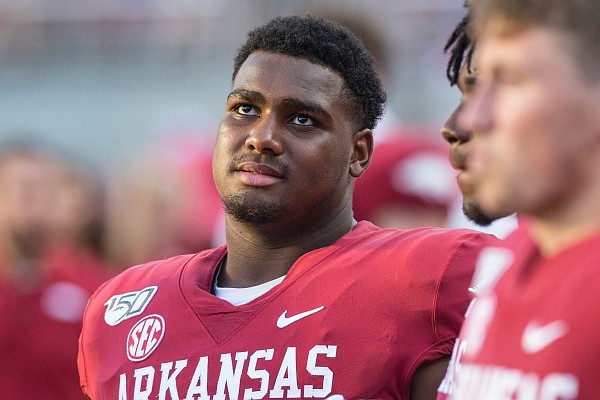 Jackson, the second Razorbacks player to announce plans to transfer from Arkansas following spring practices, has committed to North Texas, according to a post to his Twitter account. He stated plans to enter the NCAA transfer portal on April 21.

Jackson (6-0, 298 pounds) was in competition for playing time at defensive tackle during the spring, but Isaiah Nichols, Taurean Carter, Eric Gregory, who has a combo role at end and tackle, and others appeared to be ahead of him in the depth chart.

He played in three games over the last two seasons – against Mississippi State and Western Kentucky in 2019, and against LSU in 2020. He did not record any statistics.

Jackson finished the Razorbacks’ spring game on April 17 with 5 tackles, 2 tackles for loss and 1 sack for the Red team.

A three-star prospect from Mansfield (Texas) Legacy, he was rated the No. 28 defensive tackle nationally by Rivals. Jackson initially signed with the Razorbacks over scholarship offers from Florida, Georgia, LSU, Missouri and other programs.