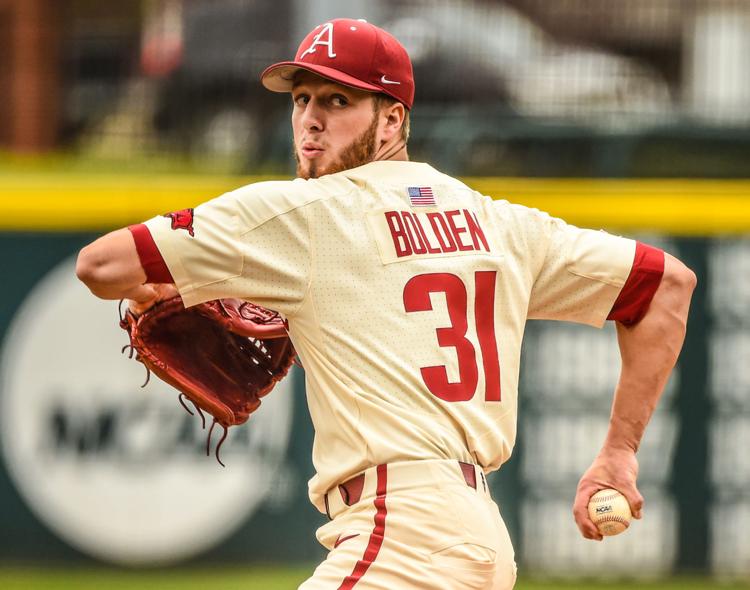 FAYETTEVILLE, Ark. — Not coincidentally, Arkansas beat Georgia the two games that senior reliever Kevin Kopps pitched and lost the game he rested in between.

So Coach Dave Van Horn’s Razorbacks for the eighth consecutive SEC series prevailed at least twice of thrice in their 3-game sets upping their overall record to 36-9 and SEC record to 17-7 sharing best in the West with the Mississippi State team they swept back in March at Starkville, Miss. and also tied for the SEC Overall with 17-7 SEC East leader Tennessee.

At Baum-Walker Stadium against Georgia’s 27-18 overall/ 11-13 in the SEC East Bulldogs, Kopps logged his seventh save Friday night and Sunday afternoon upped his record to 7-0.

In Friday night’s Arkansas 3-0 victory, Kopps’ final three innings and 54 pitches completed the shutout started through 5 2-3 by winner Patrick Wicklander with lefty Caden Monke strategically used to get the last batter in the sixth stranding a runner at third.

Van Horn got tempted to use Kopps Saturday night and did have him playing catch before sat him back down with Arkansas trailing,5-3 in the seventh and eventually losing 7-3.

Good thing playing a little catch was all Kopps did Saturday.

“I felt good yesterday playing catch a little bit,” Kopps said. “I think that extra day off helped me to be a little better.”

With Arkansas down 3-0 Sunday afternoon to Georgia ace Ryan Webb, Van Horn summoned Kopps to retire right-handed batting Connor Tate on behalf of Monke for the last out in the fifth.

On three hits, Kopps blanked the Bulldogs striking out five with no walks through 4 1-3 innings and 57 pitches.

“I don’t what else to say about him,” Van Horn said of Kopps’ SEC superlatives and 0.72 earned run average. “He did a tremendous job. He’s just a competitor. He wanted the ball and we knew he had some pitches left in him. Just did a really nice job.”

Apparently Kopps can’t be be beat juiced by beets.

““Beet juice,” Kopps said of his resiliency. “I worked a lot of forearm strength and I kind of pushed in the preseason lifting while I’m throwing more so I could life a little bit less now. I think that and beet juice has pushed me over the edge.”

Kopps’ presence on the mound seemed to resurrect the Razorbacks bats.

“Yeah, there was probably a little bit different feeling,Van Horn said. “Like, we probably got a couple innings here where they’re not going to score and we’ve got to catch up.

“Just a really good comeback for us today against probably one of the top pitchers (Webb) in the league. “I know his record (3-4) doesn’t maybe show it, but his stuff is really good. He kept us off balance a few innings there and got out of a jam or two but that’s what good pitchers do.”

Goodheart and Battles would star again. With two out in the sixth Goodheart swatted a mammoth solo home run over center tying it 3-3.

Asked what he saw, Van Horn replied, “I saw a ball hit a long way. It didn’t matter which way the wind was blowing unless it was blowing in really hard because that ball was crushed. I would say it was at least 450.”

Battles homered leading off the seventh still against Webb.

“That 2-run single was big because he went the other way,” Van Horn said of Battles’ fifth-inning 2-run single confounding what had been an effective Georgia shift. “And then that home run, that was a big swing for us. He had a good day at the plate.”

Saturday two rare errors on the same Georgia at bat by Arkansas starting pitcher Peyton Pallette and second baseman Moore contributed to Arkansas losing a 3-1 lead and eventually the game, 7-3.

When faced with a 1-1 split for a SEC’ series first two games, the Hogs are 5-0 in the deciding rubber match.

“It’s the last day of the series and we’ve come up big whether it’s through pitching, defense or hitting,” Van Horn said. “Just been a real good job by the team.”