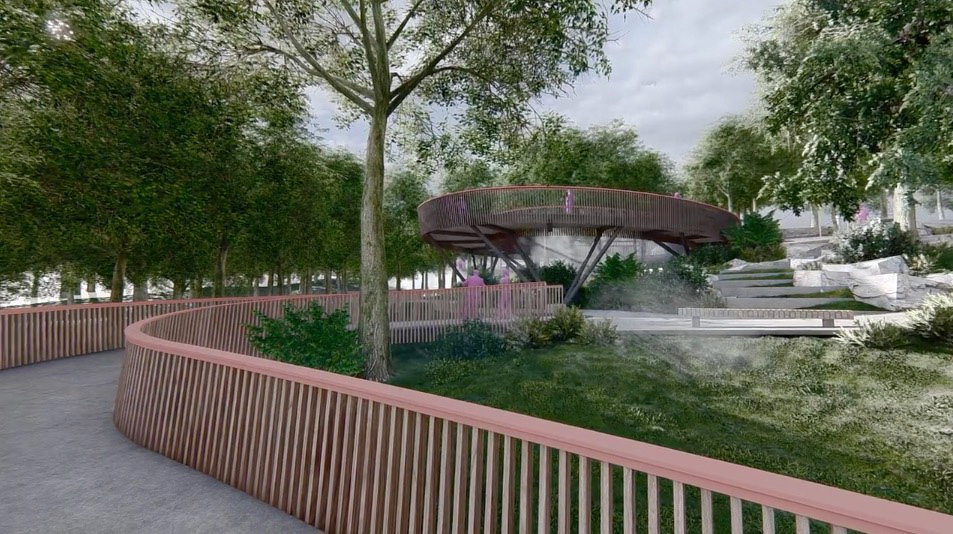 FAYETTEVILLE, Ark. — The Planning Commission on Monday made an exception to the city’s streamside protection rule for a project meant to improve a natural area in the middle of downtown.

Commissioners voted 9-0 to grant a variance to city code allowing the Fay Jones woods portion of the cultural arts corridor project to go forward. The request, which involves turning the 7 acres of woods west of the Fayetteville Public Library into a nature attraction, meets the intent of the code, said Alan Pugh, staff engineer for the city. A stream, Tanglewood Branch, runs north-south near the Razorback Greenway through downtown.

• Rezoning just under 2 acres north of Huntsville Road and west of Crossover Road from strictly residential to a mix of residential and commercial uses.

“While overall we feel strongly that this project will be a vast improvement to the health of Tanglewood Branch, there are aspects such as the crossing, public seating and gathering areas that we feel are not expressly allowed within the bounds of the current streamside ordinance,” he said. “There are going to be multiple trails, both inside and outside the streamside zones as well. For those reasons, we felt a variance was necessary.”

The City Council adopted the streamside protection ordinance in 2011 after a robust amount of public comment both in favor and against the measure.

The stated purpose of the ordinance is to limit development within 50 feet of a stream, such as a parking lot, in-ground swimming pool, buildings and accessory structures and clearing of noninvasive wooded vegetation.

The Fay Jones woods will have pedestrian and bicycle trails, with invasive plant species removed and stream restoration work done by the Watershed Conservation Resource Center. Native plant species will replace the invasive ones removed. Bridges and boardwalks will hover over the ground, with an overlook in the forest canopy, according to a letter from Nathan Foley with Nelson Byrd Woltz, the landscape architect the city hired to head the project.

Construction should begin soon and last until the end of this year or the beginning of next year, according to the city’s website. The project is an aspect of the larger $31.7 million cultural arts corridor bond issue voters approved a year ago. Other elements of the arts corridor including turning the parking lot west of the Walton Arts Center into a civic green space and making improvements to the Razorback Greenway and to West Avenue and its adjoining streets.

One resident, Charles Pearson, spoke during the meeting. The commission met online via Zoom, and members of the public could chime in by registering beforehand and raising a “virtual hand,” or by calling in.

Pearson said he owns property south of the project, and expressed enthusiasm for the overall concept.

“I think this is a fabulous idea, and I really look forward to seeing it done,” he said.

Commissioner Leslie Belden said the project’s design will benefit the stream in ways that aren’t happening now. Cleanup, streambank stabilization and an overall eye toward the environment and aesthetics all will serve as an improvement, she said.

“It just looks like a fabulous plan. I’m looking forward to having it completed and used,” Belden said.

In other business, the commission by a 9-0 vote denied a rezoning request on the western edge of town near Farmington. The request was to rezone 12 acres west of 54th Avenue between Wedington Drive and Persimmon Street from single-family residential allowing up to four units per acre to one allowing up to eight units an acre.

Commissioners equated the request to surburban sprawl. The idea refers to homes isolated from businesses, schools and other amenities, forcing residents to drive far distances. The city has an adopted policy discouraging suburban sprawl.