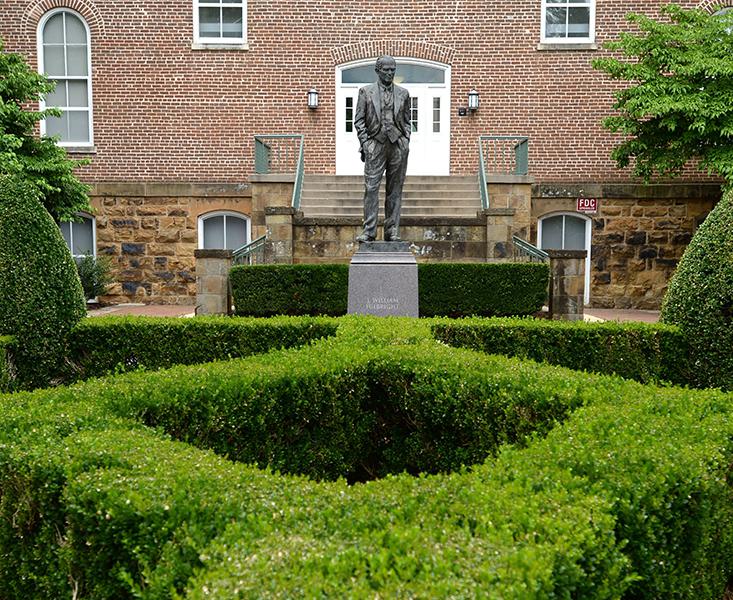 FAYETTEVILLE, Ark. — Comments to the University of Arkansas, Fayetteville about the legacy of former U.S. Sen. J. William Fulbright included a few threats to halt donations if his statue is taken down and his name is removed from UA’s arts and sciences college.

But many wrote in to say that UA should distance itself from Fulbright given his legislative record supporting segregation and opposing civil rights in the 1950s and 1960s.

A campus committee that since August has been studying his legacy met again on Friday, a UA spokeswoman said. No recommendation from the group to Chancellor Joe Steinmetz has been announced. The meetings have been held virtually.

The drive to reexamine Fulbright gained momentum last year, but comments solicited as part of the campus effort also show that strong supporters remain for the longtime U.S. senator and former UA president. He’s perhaps best known for introducing legislation in 1945 that created the international education exchange program named after him.

An Arkansas Democrat-Gazette analysis of more than 225 comments found that students wrote in to support change by a roughly 3-to-1 margin, with faculty members and alumni commenting in smaller numbers but leaning the other way on what the university should do.

“Good luck in your decision. You are going to make people mad either way,” said one alumni comment.

Todd Shields, dean of UA’s J. William Fulbright College of Arts and Sciences, has said that changes would require action from the university system’s board of trustees.

The committee — which includes alumni, faculty members, students and community members — also is reviewing whether to change the name of a student dining hall named after Charles Brough, a former governor, given his role in the 1919 Elaine Massacre. Historians say an unknown number of Black residents were killed without justification by white mobs.

As governor, Brough authorized soldiers to be deployed to the area, and there is “anecdotal evidence” that troops killed Black people in the area indiscriminately, according to the Central Arkansas Library System Encyclopedia of Arkansas. After the killings, Brough relied on white informants and appointed a commission tasked with “trying to prevent future occurrences” rather than investigating the deaths, the encyclopedia says.

Among different groups providing feedback — faculty members, staffers, students and community members — a strong majority of the commenters said they would like Brough’s name removed from the dining hall.

The comments included a sprinkling of disdain for the review process along with some threats to withhold donations.

An alumni commenter stated that “if you make changes to the Fulbright legacy I will re-write my will to exclude the U of A.” The commenter was self-described as a scholarship donor and Towers of Old Main benefactor, a designation for donors who have given $100,000 or more to the university.

A different comment stated that “any removal of statue or name will cause me to remove the U of A from my estate plan.” The university released the comments under the state’s public disclosure law.

Most of the comments released were those submitted via an online form, which asked open-ended questions rather than having commenters submit a “yes” or “no” response about whether they supported removal of the Fulbright statue or other changes.

The records show that respondents also were asked to disclose their affiliation to the university. Names weren’t asked, though some commenters using the form apparently did include their names.

Some other written comments were also included in the records released to the Democrat-Gazette.

In a comment not labeled as coming from within UA or from the community, an individual stated: “I, too, have the ability to make choices. Should the university choose to minimize its association with Senator Fulbright, I will immediately remove the University from my trust/will, followed by not renewing my alumni association dues. I’m sure that’s of little consequence to you.” Other comments did not specifically cite finances, but they referred to otherwise cutting ties with UA should the campus make changes.

“If the university caves to a small minority and erases Fulbright’s huge contributions to this school because of political correctness, I will no longer associate with the U of A,” stated one comment.

Others expressed admiration for Fulbright while acknowledging his flaws.

“Please keep the J. William Fulbright name and statue. It is not fair to judge figures in history by today’s lens that did not exist at the time. He was human and had flaws like everyone else, but his international recognition and the good things he did outweigh any negatives,” said one comment.

Among commenters using their names was Tommy May, a former member of the University of Arkansas System board of trustees who has held leadership roles with Simmons Bank.

“While there are others that may want to remove those references to Senator Fulbright, and i respect their opinions, I simply believe that Senator Fulbright not only did so much for our State and Nation, but his legacy of fair play and proactive service for democracy, justifies and warrants this recognition,” May stated in his comment, adding that “we cannot remove or not recognize great Americans for being a part of Americas worst days.”

Without a clear “yes” or “no” option for comments, some lacked clarity on whether the people wanted change.

Among more than 100 comments labeled as coming from students, however, statements supporting change were far more common than those seeking to keep things as they are.

The petition gained steam around the time that hundreds of social media posts began appearing with #BlackAtUARK, the hashtag used by students and alumni in which they described instances of racism and inappropriate behavior occurring on the UA campus.

“Several months ago, a petition circulated via social media regarding this exact issue. I am glad to see we are finally making (some) headway. It is my strong opinion that the Fulbright namesake and statue be removed from campus and replaced with a different figure. Namely, an individual who had the courage to stand up to systemic and oppressive racism and hate,” stated the comment.

Another student comment stated: “Personally, I am sickened by the possibility that I might one day have a diploma saying that I got my education from a school named after a segregationist. I think it is despicable that it is 2020, and we are just now considering the fact that Fulbright’s legacy maybe isn’t one to memorialize.” Some commenters said that keeping Fulbright’s name in place would have a negative effect on campus.

“I think we have move[d] past the time where he needs to be honored on campus. His legacy is just creating an uninclusive environment that is prohibiting us from growing,” stated one student commenter.

A few students stated their race along with their opinions.

“As an African American woman, it makes me feel uncomfortable just to walk by it,” said one student comment. The commenter added that with an understanding of Fulbright’s history, “it has reaffirmed my observation of the same circumstance we find today for powerful prestigious white males in America where one’s moral character and history is ignored if achievement is made.” Others stated how segregation and discrimination affected their families.

Fulbright’s “legacy impacts me because his choices have affected the lives of my parents and grandparents,” said one student commenter. “Every year he spent currying favor with segregationists was matched by my family having to live through subhuman conditions and gross discrimination because of their skin.” Among the records released by the university was a lengthy statement from the group of Black student leaders identified on social media as the Black Student Caucus, which last year promoted the petition calling for the removal of the Fulbright statue and name.

“Ultimately, compromise is the most human thing one can do. However, when does compromise become too much?” the group’s statement read in part, continuing on to ask, “is compromise okay when we ask the black student to walk and learn under the statue of a man every day of their schooling who ultimately did not believe they should be there?”

Some commenters did favor changes that stopped short of removing Fulbright from campus, however, and in past comments Shields has said that the committee is considering ways of publicly adding context to Fulbright’s legacy.

“In my opinion, an additional placard detailing the history of the controversy of Fulbright should be placed next to his statue,” said one staff comment. “A class in Fulbright’s legacy should also be covered and the college’s mission statement should acknowledge the steps and challenges of going above the senator’s legacy; as people have their faults, it’s important to overcome for the sake of helping others.” One student commented: “I think the statue should either stay where it is and be re-contextualized, or moved somewhere else where it can be observed in a different manner. Regardless of where it sits, his legacy, entire legacy both good and bad, should be known.”