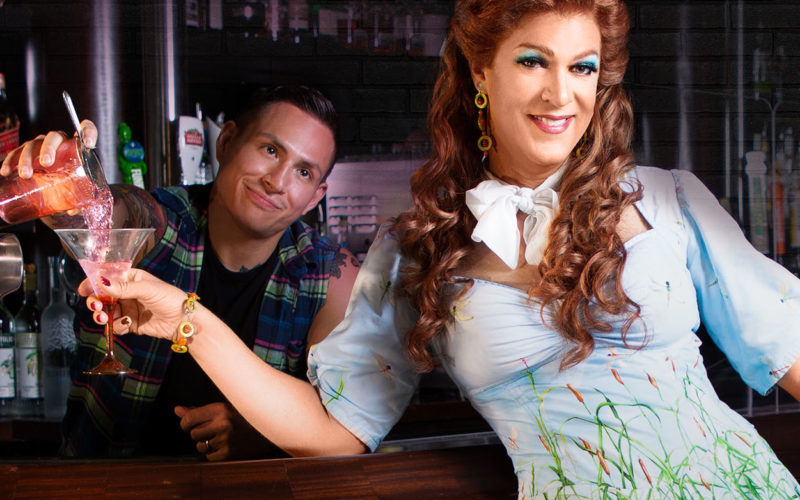 FAYETTEVILLE, Ark. – “I was stuck at home with the kids, which is so gross! But you know, they make you,” she gabs in her signature impenetrable Alabama accent and rapid-fire cadence. “And well now, especially, they’re like, ‘You’ve got to educate them.’ I’m like ‘How do I…(indistinct sound of annoyance).’ So I’m trying to learn them like how to pour glasses of wine that are the proper pour for me, because I’m like, ‘That’s a full glass. That’s math!’ You know, stuff like that.”

She also spent time doing lots of Facebook Live and Instagram videos, along with a weekly happy hour online, to keep her audiences smiling and laughing. When the thought struck her that maybe the happy hours could be a way to support performing arts venues across the country, she started fleshing it out and landed with a full show, “Dixie’s Happy Hour.”

“Dixie’s Happy Hour” is the third major show from actor, writer and comedian Kris Andersson, the performer behind Dixie’s drag persona. Walton Arts Center patrons might remember seeing Andersson’s first hit show, “Dixie’s Tupperware Party,” almost exactly two years ago when the Queen of Tupperware brought the long-running Off-Broadway smash to Fayetteville. No bowls or cupcake carriers will make an appearance in this show, though. The Tupperware party is like “Dixie at work” and the Happy Hour is like “Dixie at home,” Longate explains.

“This is about the four basic food groups: rum, gin, vodka and tequila,” Longate asserts. “I make cocktails through the program, but every time I’m making a cocktail, it reminds me of a story. So I tell all these stories about general things about my growing up and my life and things that sort of made me the person I am today. And it’s basically the show is about finding the happy hours that you might be missing, that are right in front of you.”

The show is a streamed performance, not on demand, because Longate says she wanted to replicate — as closely as possible — the idea of going out to the “the-a-ter,” for a show at a set time. All of Longate’s new friends can find recipes on her website and social media platforms ahead of time to make the cocktails alongside her, or before the show for a happy hour of their own, she suggests.