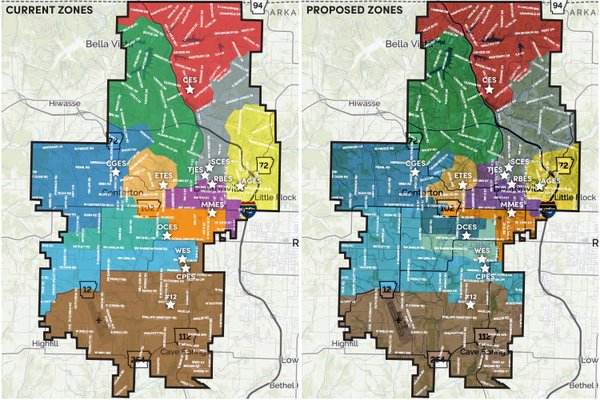 The district’s 13th elementary school will be constructed on 30 acres at S.W. Barron and Opal roads and will have the capacity for about 700 students, said Don Hoover, student services executive director.

The district worked to keep neighborhoods united, considered future growth and previous rezoning and strives to have the maximum number of Bella Vista students attend Cooper Elementary School when reworking the potential zones, he said.

“We’re impacting a lot of different areas to make this work,” Hoover said.

Some 1,156 students may be effected by the rezoning, he said.

The board will vote on the new zones June 15 at its monthly meeting, he said.

The new elementary school will open in the fall of the 2022-23 school year, Hoover said

In other news, the board approved a more than $1.3 million roof replacement project at Jefferson Elementary School.

The board voted 7-0 in support of the project’s guaranteed maximum price.

The roof is 25 years old and has no insulation properties, said Paul Wallace, facilities director.

The project will include gutter and downspout replacement, as well as the addition of roof insulation and a new taper system for energy savings and proper drainage, according to supporting documents.

Work is scheduled to begin in June and to be completed in July, Wallace said.

M2 Roofing of Harrison has been selected as the project contractor, he said.

Jennifer Morrow, secondary education executive director, also shared an update on the district’s commencement with the board.

“This is our favorite time of the year,” Morrow said.

There are no attendance restrictions for the ceremonies, and seats will be available on a first-come, first-served basis, Morrow said.

“We will use the entire field to do that,” Morrow said of distancing graduates.

Ceremonies will be held in the schools’ auditoriums in the event of rain, Morrow said. Families will receive appointments for graduation if the rain plan is put into effect, she said.

Debbie Jones, superintendent, also reported all district staff who want to be vaccinated for the covid-19 virus have been.

The district partnered with Collier Drug Stores Friday to vaccinate about 350 students who are 16 or older at its high schools, Jones said.

All participating students volunteered to be vaccinated, she said.