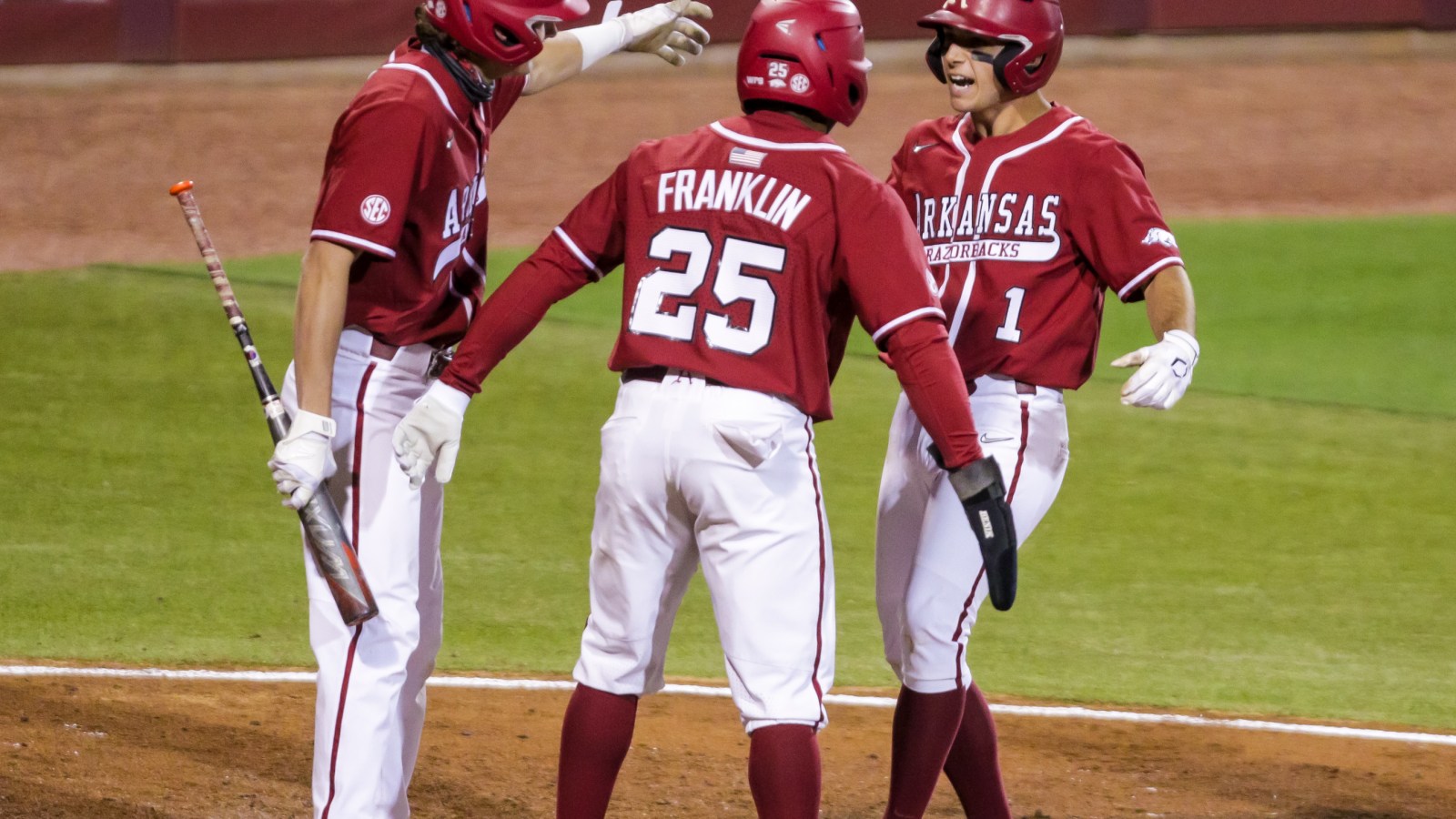 FAYETTEVILLE, Ark. — Much has been said and written about Arkansas’ pitching staff, but the offense has been pretty good as well.

The Razorbacks have hit 76 home runs in 42 games this year, two more than any other team in the country this season. Old Dominion ranks second with 74 in 42 ballgames, while Mercer checks in at third with 71 in 44 games.

The Hogs have four players who are in double figures in homers. Robert Moore and Matt Goodheart lead the team with 11 each while Christian Franklin and Brady Slavens each have 10. Cayden Wallace has nine as well. Dave Van Horn has taken notice of the offense.

“It’s been really consistent and put a lot of pressure on opposing pitching staffs and coaching staffs,” Van Horn said.

Van Horn praised some individuals for their performances this season at the plate.

“Goodheart’s  really been consistent,” Van Horn said. “Brady Slavens leads the team in RBI and kept his average up there.  Cayden Wallace hitting over .300, got nine home runs, right around 30 RBIs.  He’s even taken a little drag bunt into his arsenal right now.  He can really run and got a bunt for a hit leading off a big inning for us. I’m excited to see that.  He laid down that bunt and we ended up scoring a bunch of runs so that was exciting. He’s a freshman, strong and hanging in there and seeming to get better as the season goes on.

“Christian Franklin has had a tremendous, tremendous year. I’ve said this a lot this year he’s been a little bit of the unlucky hitter. He’s hitting a little over .300 and he leads our team with 11 doubles, he has 10 home runs, 45 RBI or something like that. I think he’s been Mr. Consistent. You take away one stretch there when he was 2 or 3 for 20 something but there were five or six balls in that stretch he hit right on the nose. Our center fielder is as good as any in the country. I don’t know if there’s better because he’s definitely as good.”

Moore has hit in leadoff spot, nine hole and now is sixth. Van Horn talked about why he likes Moore in the middle of order more than top or even bottom.

“Robert Moore has hit leadoff for us most of the year,” Van Horn said. “I dropped him down to the hole to get him hitting behind Christian and help us drive in runs. Robert is hitting around .300 and he’s had some big home runs, he’s had 11 home runs. You think about South Carolina he hit two home runs in one game that gave us the lead and then a bigger lead. I like him in the middle of the order. And he’s taking his walks. He’s walked a lot lately.  He’s getting deeper in the counts and getting better pitches to hit.”

In addition to leading the country in home runs, the Hogs have walked 251 times to top the SEC. Van Horn talked about that.

“It’s a big part of our offense,” Van Horn said of that combination. “Whenever you hit the ball out of the park it’s nice when you have a runner on base or two. It’s nice to have the ability to score quickly like that. The walks just mean we’re being more patient than we have in the past. We’re recognizing pitches. Taking borderline pitches early in the count. I think we’ve done a really nice job the last 25 or 30 games I think we’ve gotten a lot better at it.”

But as with any coach, Van Horn sees some areas the Hogs can be even better on offense.

“You can always pick apart everything I think as a coach and that’s our job,” Van Horn said. “Continue to get on base. Especially at the top of the lineup. We just have to do a good job of scoring runs with two outs. I think we’ve been pretty good at it all year.

“Maybe the thing that would standout more is score earlier in the game. We did a really nice job actually in Game 2 at LSU. We scored five runs in the first. You don’t expect to score that many early, but a run here or there I think would be something that would really help us going forward.”

One thing Van Horn is very complimentary of the offense is for the most part this season they have gotten the maximum with their 27 outs. The team has rallied late to win a lot of games and even almost came back against LSU in Game 3 this past Saturday night. The Hogs were down 5-1 in the top of the ninth and scored three runs to come up just short against the Tigers.

“For the most part we feel pretty good about the fight back,” Van Horn said. “We go in the last inning three or four runs down we’ve got a shot. Three runs we’ve got a good shot. Four runs a little more difficult. We found that out the other day.

“We were so close. We hit the ball extremely hard and made outs in that inning except for the called third strike that was out of the zone. That’s a good umpire that made that call. But we line out to center, we line out to third, boy could have been crazy. But I think our team they will fight you for 27. If it’s close we still have a good shot going into last inning.”

Argenal aiming to add banners with Musselman at Arkansas