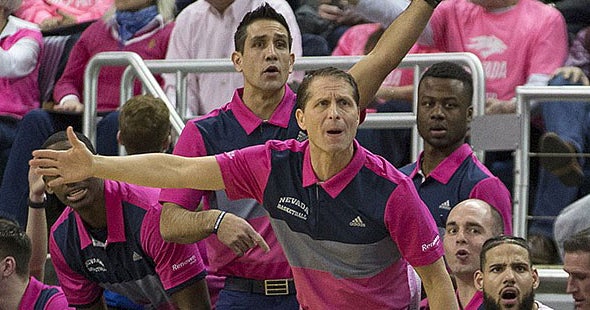 FAYETTEVILLE, Ark. – New Arkansas assistant coach Gus Argenal is still settling into his new gig on Eric Musselman‘s staff. While his new office could still use a little decorating and he moves towards closing on a home in Fayetteville for his family, he’s already been hard at work for the Razorbacks as he steps in with plans of helping the program take the next step.

There’s no time to waste for Argenal, who has been waiting quite some time for the opportunity that is in front of him today. Throughout the better part of the last two decades, he’s a had a long, winding road with several stops and countless titles. It all led him to Arkansas, and the position he’s in now is still sinking in.

“I think when you go through that and you get an opportunity like this, you walk in the office and throw some water on your face and say, ‘Wow, this is awesome.’ I dreamt about being a part of something like this. I felt that way at Nevada, and I feel like that even more here.”

Argenal shares a lot in common with Musselman which is part of the reason the pair have developed a strong bond over the years. There are similarities in the paths of both coaches, and Argenal knows the ups and downs along the way for Musselman have ensured his appreciation for where he is now. They’ve shared success and special moments together at Nevada, and now the focus has turned to taking the next step with the Razorbacks.

“I think with Coach, he really appreciates every opportunity with going through the G-League, the CBA when he was there,” said Argenal. “His different path and then deciding to go to college basketball. Then his trajectory and how it’s been going so quickly, I know he feels the same way.

“We always go back to the NCAA Tournament. When we made that Sweet 16 run, we essentially blacked out for two straight weeks. We were just like what’s going on here. We want to make some more memories like that, and a lot more here for the fans and our players, the student-athletes and the entire program. We want to add more banners.”

Musselman and Argenal led Nevada to the Sweet Sixteen in 2018 and fell just short of an Elite Eight appearance when Cinderella story Loyola edged past the Wolf Pack in the closing seconds. Nevada returned to the NCAA Tournament the next season but lost to Florida in the opening round. Shortly after, the band broke up, Musselman was off to Arkansas and Argenal took the associate head position at Cal State Fullerton.

Now that they have reunited just two years later, Argenal is anxious to help Musselman take the Hogs one step further. The SEC is a different animal than the Mountain West, but the experience Argenal gained coaching a highly ranked program in big time moments has him confident he can handle the pressure and high expectations that come with coaching at Arkansas.

“I will say this, in ’18-19, coming into the season we were ranked I think No. 7 preseason at Nevada and we got as high as No. 5 and we were in the top 10 for 16 straight weeks straight,” said Argenal. “So the pressure of that, obviously there’s a different level here in the SEC on a daily, nightly basis. But the pressure of the expectation, as that builds throughout the season, I’ve definitely been through some of that.

“Going to the Sweet 16, we were one game away from getting to the Elite 8 obviously and Loyola-Chicago knocked us off, really at the buzzer. I was able to go through that with coach and see what each game meant and how the pressure built. We didn’t get to the Elite 8 level but hopefully next year we can get one more game past that and get to the Final Four. I’m excited.”

Winning at a high level certainly helps with recruiting at a high level. Arkansas was able to take advantage of its March Madness success by quickly landing three impact transfers to supplement a strong returning core that already has the Hogs in top 10 range in most Way-Too-Early rankings. With three scholarships left to fill for the coming season, Argenal is anxious to help round out the roster and get to work on what is shaping up to be another exciting year ahead for the Razorbacks.

“One part of that is recruiting the best of the best,” said Argenal. “We were able to bring in the best recruits that they’ve ever had at Nevada. Again, I know we’re going against the best in the country now, but we were doing that before and we’ll look to keep doing that.

“The roster, I think that’s why there’s such an excitement because not only did they finish off the season with the run that they had, but you capitalize on that with bringing in a great recruiting class. So for me, being able to work with some of the best transfers in America along with high school student-athletes we have coming in, it’s going to be phenomenal.”

Arkansas’ Pitching Gets Headlines, But Bats Have Been Impressive as Well