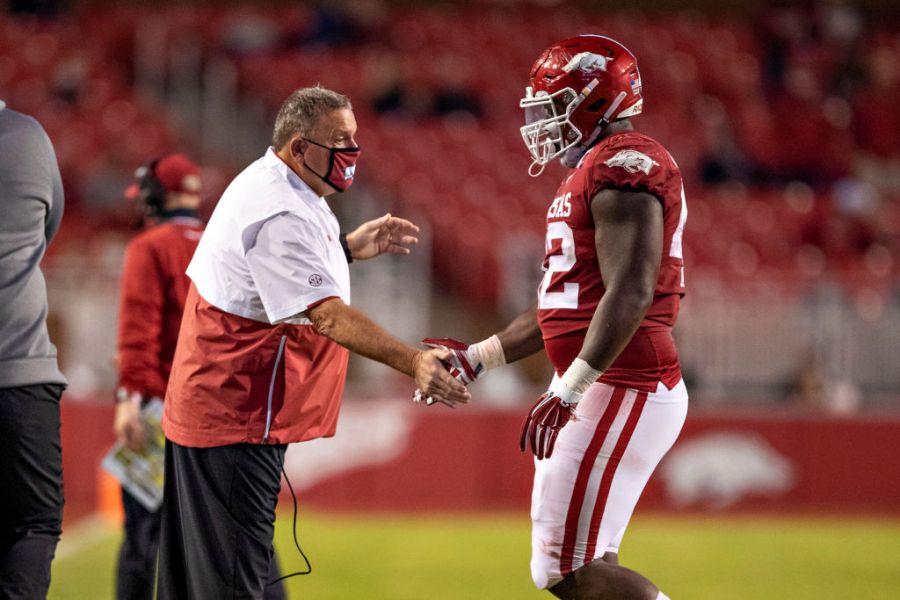 FAYETTEVILLE, Ark. – Another revenge game, another emphatic statement made by 20th-ranked Arkansas as the Razorbacks put the clamps down on the high-octane LSU Tigers, 83-75, on Saturday at Bud Walton Arena in Fayetteville to cling to a sliver of hope for an SEC regular-season title in 2020-21 while extending the program’s best league winning streak since the national championship Hoop Hogs’ historic run through the SEC 27 years ago.

Once again, it was Arkansas’ trio of talented and battle-tested freshmen combined with veteran influence and impact coming up big in a matchup the Hogs dominated in the second half while overcoming a 7-point deficit for a 21-point lead at the 6-minute mark to effectively seal the win. Senior combo forward Justin Smith notched his second-consecutive double-double with 19 points (8-of-12 field goals, including 1-of-2 from 3, and 2-of-2 free throws), 10 rebounds, 1 assist, 1 steal, and 1 block; freshman shooting guard Moses Moody had 18 points (including 11-of-14 from the free throw line) to go with 8 rebounds and 5 assists; junior guard JD Notae came off the bench to finish with 18 points, 6 rebounds, 2 steals, and 1 assist; freshman combo guard Davonte “Devo” Davis finished with 15 points (7-of-12 field goals and 1-of-2 free throws), a game-high 6 assists, 5 rebounds, and 1 steal; freshman big man Jaylin Williams had 8 points, 6 rebounds, 4 blocks, 2 assists, and 2 steals; and senior combo guard Jalen Tate had 2 points, 6 rebounds, and 2 assists despite playing only 12 minutes due to foul trouble.

Arkansas (19-5, 11-4 SEC, NCAA NET No. 22 entering Saturday) has now won 9 consecutive league games for the first time since the ’93-94 Razorbacks did the same as part of an overall 12-game winning streak against SEC competition, and the current Hogs also picked up their 5th consecutive Quad-1 win while improving to 5-4 in Q1 games and 4-5 against the NET Top 50.

“It feels good,” Smith said of the Hogs’ running through the month of February unbeaten (6-0). “Going an entire month without losing is a big-time accomplishment, and a lot of teams don’t get a chance to do that. I’m really proud of the way that we kind of came together after the Oklahoma State game (the Hogs’ last defeat on Jan. 30), and I think we really kind of figured it out in a way.

Arkansas left the door cracked for a possible outright SEC championship (mathematically possible, but they cannot tie) and the top seed in the fast-approaching SEC tournament. If Arkansas wins its final 2 league games — at South Carolina on Tuesday, March 2, and home against Texas A&M on Saturday, March 6 — the Hogs still need SEC-leader and No. 6 Alabama (13-2 SEC entering Saturday) to lose all of its last 3 games, the first of which will be played at 5 p.m. CT today at Mississippi State. The second-place Hogs moved 2 full games ahead of both LSU and Florida in the SEC standings while remaining only 2 games behind the first-place Tide in the loss column. Each of the top 4 seeds decided in the SEC regular season will receive a double-bye to the Friday quarterfinals of the SECT (March 10-14 in Nashville, Tenn.).

The Hogs earned a season split against LSU (14-8, 9-6 SEC, NCAA NET No. 29 entering Saturday) while avenging a 16-point loss in Baton Rouge, La., in January, and they have now exacted revenge against Missouri, Alabama, and LSU — a trio of teams that defeated Arkansas by an average margin of 20.0 points in January — as part of the Hogs’ current 9-game victory spree. Arkansas also improved to 15-1 at home on the season.

In his second season as Head Hog, Eric Musselman improved to 3-0 while coaching a ranked Arkansas team, 19-15 in SEC games, and 39-17 overall at Arkansas. And, he evened his record to 2-2 coaching head-to-head against LSU’s Will Wade in SEC play.

“I just thought that LSU, it seemed like, made the decision to play us zone, and I thought we just kind of weren’t crisp,” Musselman said of his team’s first-half struggles before making its second-half comeback. “We needed to rebound the ball better than we did in the first half. I thought we did a great job taking care of the basketball with just 10 turnovers. Justin Smith was phenomenal tonight. He defended at a high level, rebounded at a high level.

“But at halftime we had like 120 passes, which is maybe more than we’d had all year (in a half), but we weren’t attacking gaps and we weren’t being aggressive. So, the main message at halftime was, ‘Be strong, stop missing layups, go off two feet, draw contact, draw free throws attempted.’ And then, we’ve said it since the Alabama game: ‘You can’t beat LSU unless you outrebound them.’ I thought our rebounding in the second half was absolutely great. I thought we did a great job of defending without fouling.”

In that 19-7 run, it was Moody and Smith doing most of the offensive damage, combining for 15 points as Arkansas erased a 39-32 deficit to take a 51-46 lead. LSU would pull within 53-51, but that’s when Notate, Davis, Williams, Smith, Moody, and Tate led the decisive 25-6 run by seemingly winning all the hustle plays at both ends while finishing in transition or around the basket, and getting to the free throw line and cashing in.

League-leading scorer and freshman guard Cam Thomas led with the Tigers with a game-high 25 points to go with 7 rebounds. Sophomore combo forward Trendon Watford finished with 16 points and 7 rebounds, and senior guard Javonte Smart contributed 15 points, 5 rebounds, and 4 assists. Junior forward Darius Days, who came in leading LSU in three-point efficiency, was held scoreless on 0-of-8 shooting from distance.

LSU jumped out to a 12-6 lead in part due to the early departure of Tate, who picked up two quick fouls before the under-16-minute timeout and went to the bench for the remainder of the first half. Notae came into the game for Tate and struck for 7 consecutive Arkansas points to fuel a 9-4 Hogs spurt to pull wiithin 16-15.

But LSU began controlling the paint at both ends while stringing together a 14-5 run for its biggest lead, 30-20, at the 7:37 mark. Davis and Williams willed the Hogs back in it with rebounds, baskets, and hustle plays — with help from triples made by junior guard Desi Sills and Smith — as Arkansas whittled its deficit down to 3 points, 33-30, before LSU settled for a 37-32 lead at the break.

Davis, Smith, and Notae led the Razorbacks with 7 first-half points each, and Moody had 6 points, while LSU was led by Thomas’ 13 points on 6-of-9 shooting with each of his baskets coming inside the arc.