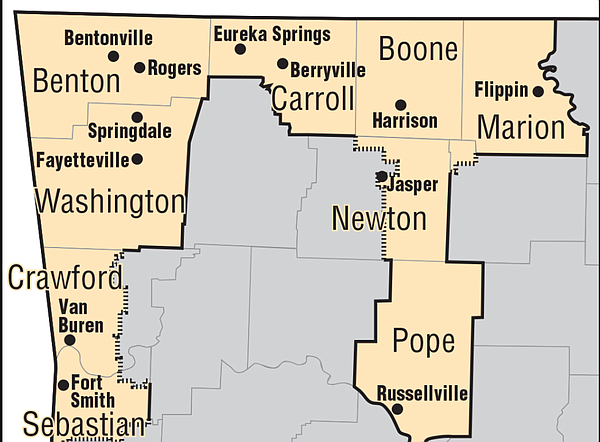 ARKANSAS – As the state prepares to rework its Congressional districts following the 2020 census, Northwest Arkansas is gearing up for major changes to its 3rd Congressional District, which stands to lose about 76,000 constituents.Why are district boundaries going to change?

After each census, the state redraws boundaries for federal congressional districts to ensure they’re all roughly the same size.

Arkansas’ official population count for April 1, 2020, was 3,013,756. This entitles the state to four seats in the House of Representatives, the same number it already has.

However, each of Arkansas’ congressional districts needs to be as close to 753,439 people as possible to ensure equal representation and the latest available estimates for the populations of each district as currently drawn are:

Final figures from the census are not in, but all the districts will need some adjustment and the 3rd District is set to change most thanks to significant population growth in the last 10 years.

3rd District U.S. Rep. Steve Womack, a Republican from Rogers, said the district will likely lose territory on its east side, in the area of Marion, Boone and Pope counties, or on the south side around Fort Smith.

However, Michael Barr, chairman of the Fort Smith Regional Council, said his city wants to stay in the 3rd District. He said as one of Arkansas’ largest cities, Fort Smith has a great deal in common with communities in Benton and Washington counties, the heart of the 3rd District.

Counties in the eastern portion of the current 3rd District are more rural, Barr said.

When will the districts be decided?

Usually, the districts would already be decided by this point in the year following a census. However, census data has been delayed by the pandemic and legal disputes (read more about that here).

The state Legislature, which recessed its regular session last week, plans to reconvene to decide the Congressional districts in the fall once final data from the census is released.