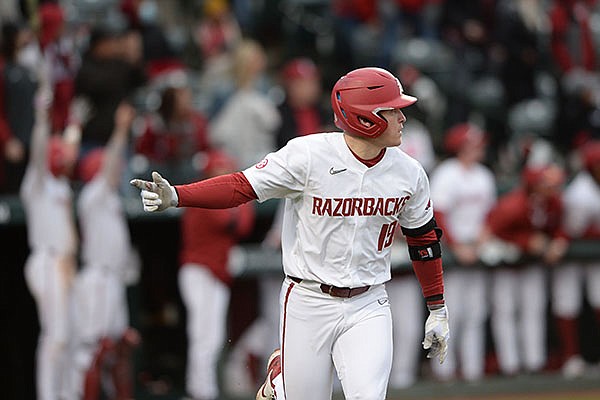 FAYETTEVILLE, Ark. — Arkansas junior Charlie Welch, a backup catcher, is 5 for 9 as a pinch hitter this season, including 3 for 6 in SEC games.

“He starts to get ready on the bench mentally,” Coach Dave Van Horn said. “He knows when — and who — I might pinch hit him for.

“You start to look around, and he’s already standing behind me with a bat in his hand. That’s what the good ones do. They figure it out — ‘This is my role. This is how I’m going to contribute.’

“It’s not like I call him and he’s got to go find his batting gloves and his helmet and his bat and next thing you know he’s taking practice swings in the box. He’s already getting ready an inning or two earlier.”

Van Horn said Welch would be a starting designated hitter for most teams, but that spot has been manned ably for Arkansas by Matt Goodheart since 2019.

“It’s been tough to keep [Welch] out of the lineup,” Van Horn said. “But knowing you have that guy as a weapon any time in the game, if you have the right opportunity depending on the score, to catch up or to build up a lead, you can plug him in.

“He’s not going to get a hit every time, but he usually has a pretty good at-bat.”

Capacity crowds will be allowed at Baum-Walker Stadium for the rest of the baseball season.

The NCAA announced Wednesday it will let local health authorities determine crowd limits for regional and super regional games after previously stating crowds would be limited to 50% capacity.

The University of Arkansas is allowing full capacity for the first time this season when the Razorbacks play Florida in a three-game series, starting at 6 tonight, and the NCAA announcement means capacity crowds also will be allowed at Baum-Walker Stadium for postseason play.

As the nation’s No. 1 team, Arkansas is a lock to be selected to host a regional and super regional.

“We’re expecting to host a regional here, so we’re really excited,” Razorbacks Coach Dave Van Horn said. “Number one, we’re excited that more fans get to come to the game. Number two, we think it’s good for us.

“To play the schedule we’ve played and what we’ve done, you’d like to have a little bit of a home-field advantage. And it is. You can say it’s not, but it is. We’re excited about it. But we’ve got to get through this weekend and talk about that a little more.”

This weekend’s series will mark the first time Arkansas is allowed full capacity at home for an SEC opponent since the 2019 season.

“There’s a lot of new guys in the program, some guys who were here last year that really didn’t get to feel an SEC crowd at home,” Van Horn said. “This’ll be their first time, and only time as far as an SEC crowd.

Vaccinated individuals are not required to wear masks at outdoor championships, including NCAA regionals, according to an Arkansas news release, but those who have not been vaccinated are encouraged to wear a mask.

No. 8 Florida will be the sixth team ranked in the top 10 of the USA Today coaches poll at the time the Razorbacks played them this season, joining Texas Tech, Texas, Mississippi State, Ole Miss and Tennessee, in that order.

Baseball America’s latest projection of the NCAA Tournament bracket has the Razorbacks as the overall No. 1 seed hosting a regional at Baum-Walker Stadium that would include 2 seed Oklahoma State, 3 seed Fairfield and 4 seed North Carolina Central.

Fairfield spent time this season as the No. 1 team in the RPI rankings.

Baseball America projects six SEC regional hosts, with Vanderbilt (projected national 2 seed), Tennessee (7), Mississippi State (8), Ole Miss (12) and Florida (14) joining the Razorbacks. Arkansas has a 7-2 record against those teams with the Gators in town today for a three-game series.

D1Baseball.com also projected the Razorbacks as the No. 1 overall seed this week, with Nebraska, Baylor and Oral Roberts in a Fayetteville regional, seeded in that order.

D1Baseball also has these SEC regional hosts: Vanderbilt (national 2 seed), Tennessee (4), Mississippi State (8), Florida (11) and Ole Miss (13). It also projects Georgia and LSU in the field as 3 seeds among the last five in, and Alabama in the first five out.

Third baseman Jacob Nesbit is Arkansas’ representative on the SEC baseball community service team, it was announced Wednesday, for his volunteer efforts on projects in Fayetteville.

Benton steps up to plate to host state championships