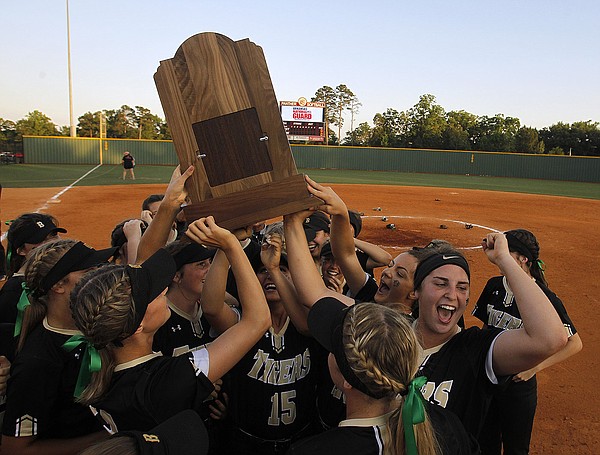 The task itself isn’t necessarily daunting — Benton has hosted state tournaments before, including the 2018 softball finals — but the scope this time is on another level.

With spring sports championships back for the first time since 2019, the Weekend of Champions has relocated from its usual site in Northwest Arkansas. The baseball, softball and boys and girls soccer state finals will all take place at the Benton Athletic Complex, with games beginning this morning and running through Saturday evening.

“It’s good for our town,” Neathery said. “It’s good for our school and our community. I know our chamber of commerce and our mayor and our school board are happy because it brings people to our community. Right now, it’s a lot of work, but we want to showcase Benton.” Typically, the AAA accepts bids from schools and communities that want to host the spring state championships and then settles on a location by February. As Arkansas Activities Association Assistant Executive Director Derek Walter explained, the goal is to have baseball, softball and soccer all in the same place, or at least close by, so that fans can attend all three competitions.

When Fayetteville didn’t bid this year — Walter noted the Razorbacks are hosting baseball and softball games this weekend — the AAA began to seek other potential sites.

Ultimately, Benton was the only school to bid.

The AAA knew what it was getting in the Benton Athletic Complex. Three years ago when the University of Arkansas softball team earned the right to host an NCAA regional, the AAA had to scramble to find a new location to replace Bogle Park.

Benton stepped in, and the Panthers played host to the most-attended softball state finals in AAA history.

This year, the possibility to draw even more fans is on the table. Although a large number of the participating teams are based in Northwest Arkansas, there will be no covid-19 restrictions on fan capacity after getting approval from the Arkansas Department of Health and the Benton School District.

“I had somebody tell me one time to never have an event in a venue too big,” Walter said. “It doesn’t hold what U of A does, [but] we’re feeling that bringing it to Central Arkansas will definitely attract a big crowd and it will be a great environment.” In addition to 4,700 fans for soccer, Benton will be able to seat 1,000 fans at baseball and another 750 at softball. Neathery emphasized there will be no limit on standing room, and he expects many fans to bring lawn chairs and blankets to sit down the baselines and around the outfield.

For those who haven’t been to Benton before, they’ll get to experience facilities that have been built from scratch within the past 12 years.

Benton opened its softball stadium in 2009 and then added Panther Football Stadium and Cook Fieldhouse a few years later. They completed the process in 2019 when the new baseball stadium opened.

Benton will have plenty of home cooking going when the Lady Panthers play Greenwood for the Class 5A softball title this afternoon.

“Everyone in town is pumped about it,” Neathery said. “They’re fired up to play here and maybe have a chance to win a championship on our own field.” For those who can’t make it, the AAA will have added coverage — Arkansas PBS will televise the softball finals as they have previously for football, basketball and baseball — and fans can access live stats for baseball and softball.

Walter said it’s not yet logistically possible to televise soccer as well, but added that those finals will be streamed on the NFHS Network.

It’s part of the AAA’s effort to build excitement around one of its crown jewel weekends.

“Our biggest thing is that this is probably the biggest game any of these student-athletes will play in,” Walter said. “I know some get disappointed about [not being in Fayetteville] but our goal is to make this weekend the biggest and coolest event for the student-athletes so they’ll remember playing in the state championship for the rest of their lives.”

Welch comes through in pinch