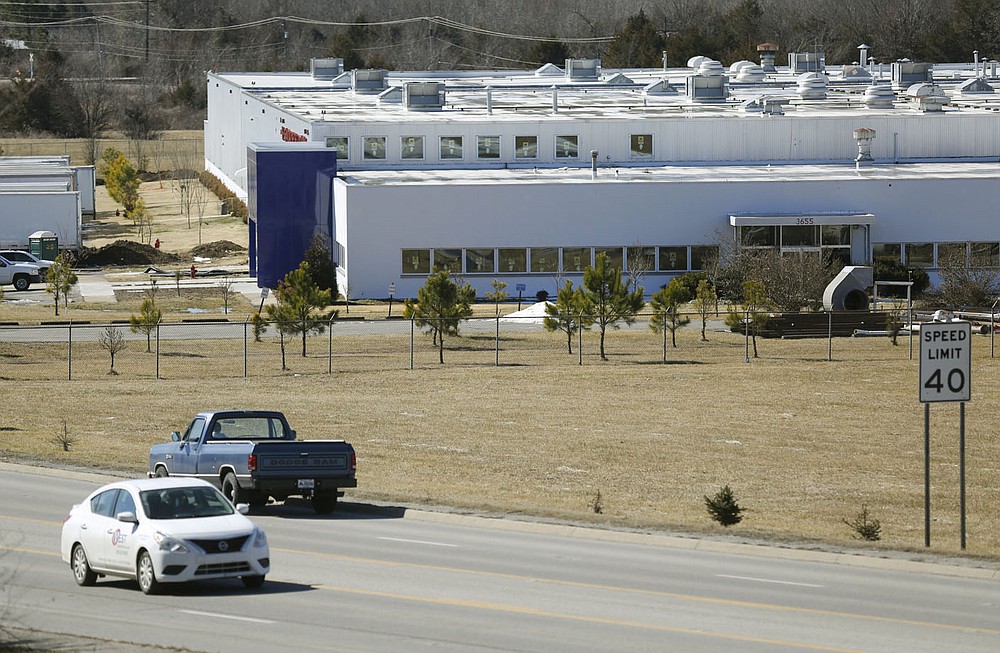 FAYETTEVILLE, Ark. — A longtime commercial printing business is set to become an office and warehouse after the Planning Commission approved development plans Monday.

Commissioners voted 9-0 to approve the plans for a 99,000-square-foot warehouse and 36,976-square-foot office and showroom on about 34 acres on the west side of School Avenue, near the border with Greenland. The warehouse is planned inside the building built in the late 1950s. The separate office and showroom is planned as two stories, according to city documents. Additional parking and a detention pond also are planned.

The property was owned by Standard Register Co. until 2015, when Hanna’s Candle Company bought it for just more than $2 million, according to Washington County property records. The information packet from the city names the plan as Hanna’s expansion.

Hanna’s Candle and Candlemart.com currently operates at 2700 S. Armstrong Ave. The company makes scented candles and home fragrance products, according to its website.

A representative with Jorgensen & Associates, the engineering firm behind the project, didn’t talk about the property’s intended use during the meeting. Staff at the nearby Fayetteville Municipal Airport asked for the lighting at the site to be installed in accordance with Federal Aviation Administration guidelines, which the engineers agreed to do.

The office and showroom will have to follow the city’s design standards for commercial buildings, said Ryan Umberger, city planner. The warehouse, because of its industrial use, will not, he said.

The area was annexed into the city in 1961. The warehouse building has been expanded over the years, according to the city.

The city will require the developers to build an 8-foot sidewalk with 10 feet of green space along the front of the property. A 40-foot-wide trail easement also is required to be dedicated over an existing utility easement along the west property line for a future trail connection to Greenland. Four streetlights will be required.

In other business, commissioners voted 5-4 to forward a single-lot rezoning at the southeast corner of Sang Avenue and Ora Drive to the City Council with a recommendation of approval. The lot is southwest of Wedington Drive and Lewis Avenue.

The rezoning changes the lot from a residential zone allowing up to four units an acre to one allowing up to seven units an acre. A handful of residents spoke in opposition to the request, saying it could usher in more higher-density zoning requests for the rest of the neighborhood. The meeting was held online on Zoom.

Commissioners who supported the rezoning said it would enable the developers to lay the homes out in a way that would help protect trees at the site, and in a more sensible pattern. Splitting the lots to have homes face Sang Avenue with a shared drive behind them would not be achievable under the current zoning, they said.

Those who opposed said they were concerned with compatibility of the new structures with the existing homes in the neighborhood.

Additionally, commissioners voted 9-0 to approve a change to the development plan for South Yard, a mixed-use project planned for the former Farmers Co-op at the southwest corner of Martin Luther King Jr. Boulevard and South School Avenue. The changes had to do with the position of a planned hotel at the site after developers Specialized Real Estate Group encountered large underground silos that could not be built upon, Development Services Manager Jonathan Curth said.

In addition to the hotel, the project will include apartments, retail and restaurant space and an elevator tower resembling a silo.

Ryan Evitts with CEI Engineering said the development team hopes to preserve and restore a historic trestle bridge at the site over Tanglewood Branch.