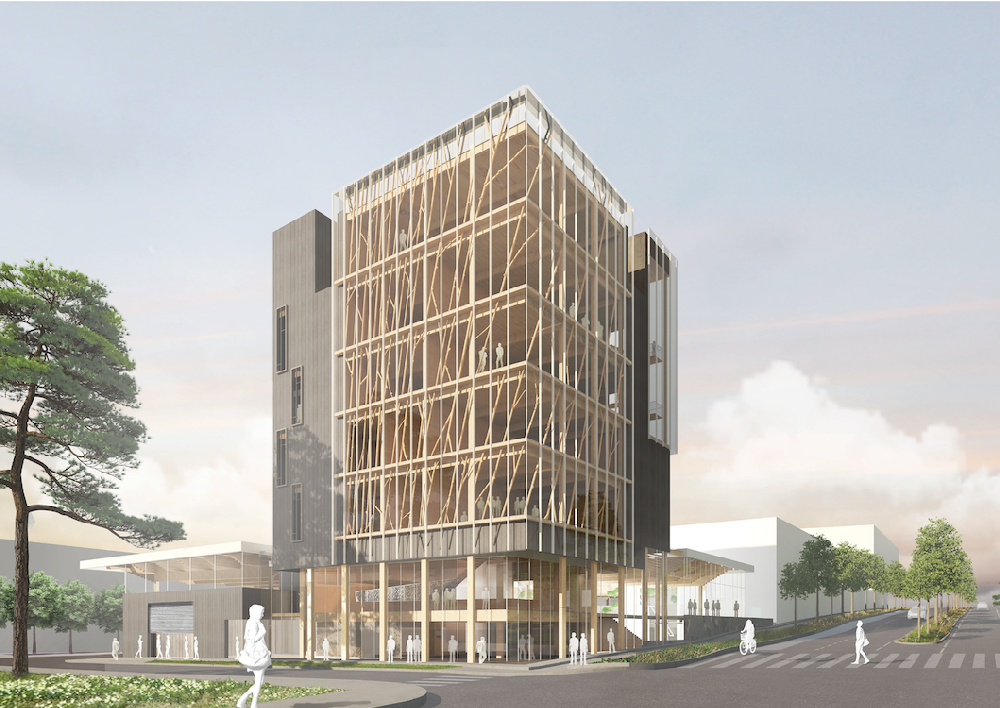 FAYETTEVILLE, Ark.— Architects from nine foreign countries and the U.S. applied to enter a design competition for a new academic building with “expanded vision and character” to form a part of the new arts district planned by the University of Arkansas, said Peter MacKeith, UA’s architecture dean.

Undulating roofs and plenty of exposed wood highlight the conceptual work of six design finalists for the $16 million Anthony Timberlands Center for Design and Materials Innovation, according to renderings released by the university.

The facility, announced in 2018 after a $7.5 million gift from donors John Ed and Isabel Anthony, is to house timber-related and wood design programs and a fabrication shop that are a part of UA’s Fay Jones School of Architecture and Design. Up to five stories tall, the research center on Martin Luther King Jr. Boulevard at Government Avenue will be part of the Windgate Art and Design District, according to the university. [Gallery not loading above? Click here for more photos » arkansasonline.com/227design/] The art and design district, so named by UA in 2014, is a few blocks from the main campus in south Fayetteville. The plan for a cluster of arts and architecture buildings received a major boost in 2017 with the announcement of a $40 million gift from the Windgate Charitable Foundation, the Little Rock-based organization’s largest single grant. The Windgate gift for the building of arts facilities followed a $120 million Walton Family Charitable Support Foundation grant supporting arts education at UA. But UA first opened an architecture shop facility at the area of the site in 2009, and MacKeith said a fabrication laboratory was included in 2014 plans for the art and design district. Next month University of Arkansas trustees will be presented a choice for the designers of the new Timberlands Center, MacKeith said. Construction is expected to begin May 2021 and be complete by December 2022, according to a timeline released by UA. The six finalists include two firms based in Europe, three in the U.S. and another with an office in Tokyo. Each finalist received a $25,000 honorarium to develop design concepts and make presentations earlier this month, MacKeith said, with the money coming from private money managed by the University of Arkansas Foundation and also grant money from the U.S. Forest Service and U.S. Endowment for Forestry and Communities. “The USFS/USEFC grant program was a specific grant award directed exclusively to incentivizing the use of innovative timber and wood construction in university buildings, and the UA Foundation funds have the same exclusive identified and directed purpose,” MacKeith said. The UA campus is already home to what’s considered the only U.S. university residence hall to be built using cross-laminated timber, a construction technique involving large-scale, prefabricated wooden panels. Adohi Hall, a 703-bed residence, opened in fall 2019. A library storage facility, also considered a part of the Windgate Art and Design District, was similarly built using cross-laminated timber. It opened in 2018, described by UA as the first structure in Arkansas to be built using the cross-laminated timber panel method of construction. The six finalists for the Timberlands Center are WT/GO Architecture, based in New Haven, Conn.; Dorte Mandrup A/S from Copenhagen, Denmark; Grafton Architects from Dublin; Shingeru Ban Architects, which has offices in Tokyo, New York and Paris; Kennedy & Violich Architecture of Boston; and LEVER Architecture, based in Portland, Ore. MacKeith said they were selected from 69 entries in the design contest. “Importantly, each consultant-finalist was advised to seek and identify an Arkansas architect with whom to potentially consult during the consultancy process, and certainly to team with if recommended and selected to move forward into the actual project,” MacKeith said. He said the design renderings from the finalists “are speculative concept proposals only, representing research, methods and visions, not intended or actual buildings.” The Timberlands Center project came about after the Anthonys gift, with John Ed Anthony, chairman of Anthony Timberlands, Inc., saying in 2018 the facility could help promote construction techniques such as those used in UA’s Adohi Hall. Anthony Timberlands is headquartered in Bearden, roughly 50 miles southwest of Pine Bluff. Last year Walmart announced buildings in its new campus in Bentonville would be built using cross-laminated timber, and a timber manufacturer, Structurlam Mass Timber, in December announced it would open a plant in Conway in mid-2021 and supply mass timber products for Walmart’s new campus. UA spokeswoman Michelle Parks said along with the gift from the Anthonys, $7.5 million in UA internal funds will go to paying for the Timberlands Center project. In addition, Parks said another $500,000 is coming from private fundraising and $500,000 from what’s considered the state “rainy day” fund, as allocated by Gov. Asa Hutchinson’s office. Planned new arts buildings for the Windgate district are undergoing schematic design this winter and further design development in the spring, Mike Johnson, UA’s associate vice chancellor for facilities, said in December.