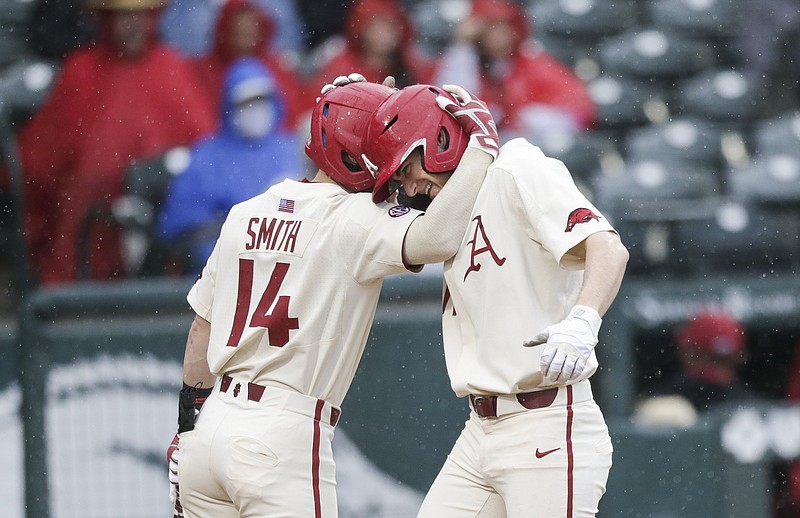 FAYETTEVILLE, Ark. — Venues positioned around the intersection of Razorback Road and Martin Luther King Jr. Boulevard by the University of Arkansas campus were at the nexus of college athletics excellence last weekend.

Arkansas Razorback fans just enjoyed what was likely the finest weekend of big wins and poll jumping that the athletics program has ever seen, highlighted by Southeastern Conference championship performances by the men’s and women’s indoor track and field teams at the Randal Tyson Center.

The home wins, which totaled 14 in four sports, came fast and furious Thursday through Sunday.

The Arkansas baseball team, led by 19th-year coach Dave Van Horn, swept a four-game series against Southeast Missouri State at Baum-Walker Stadium then vaulted to No. 1 in five of the six major polls on Monday.

The men’s and women’s basketball teams notched big wins at Walton Arena on Saturday and Sunday, respectively, and those teams were both No. 19 in the freshest NCAA NET rankings released Monday. The Razorback men jumped eight spots to No. 12 in Monday’s Associated Press Top 25, and the women leapt three spots to No. 13.

“For the collective success that we’ve had, I think they’re just feeding off each other, from one team to the next,” Arkansas athletic director Hunter Yurachek told the Arkansas Democrat-Gazette on Monday. “It’s been awesome to watch.”

Yurachek hosted a special visitor over the weekend, as SEC Commissioner Greg Sankey was in Fayetteville to attend the conference track and field meets, where he awarded title trophies to coaches Lance Harter and Chris Bucknam and their teams.

“What was really cool this weekend was that Commissioner Sankey flew in on Friday,” Yurachek said. “He normally would fly in for the conference championships, but because we had so many events on campus and because our teams were having so much success, he went to the majority of those events with me.”

Yurachek has consistently lauded all the programs in the department for their vigilance in handling covid-19 protocols and preventive measures, and he did it again to frame up the huge weekend.

“Obviously as an athletic director you’ve got to enjoy moments like this,” Yurachek said. “I’m just so proud, first and foremost, of our student-athletes for all of our sports and the adversity they have overcome throughout this entire year to put themselves in the position to have the success that they’re having.

“They’ve done an unbelievable job, and unless you’ve been through it or seen them go through it, I don’t think people truly understand how their lives as student-athletes have changed this year.”

The men’s basketball team led by second-year coach Eric Musselman completed its self-styled “Revenge Tour” by beating LSU 83-75 at Walton Arena on Saturday. That came after the Razorbacks knocked off SEC leader Alabama 81-66 on Wednesday. Arkansas has won nine consecutive SEC games and has come out on top in rematches against Missouri, Alabama and LSU, highly regarded teams it lost to earlier in the season.

Arkansas (19-5, 11-4 SEC) has its highest ranking since the Hogs were No. 12 in February 1998, after making their third-highest one-week jump in school history. The Razorback men sit alone in second place in the SEC and have clinched a double-bye at the SEC Tournament next week.

The Arkansas women coached by Mike Neighbors thumped Alabama 94-76 on Sunday, sparked by a school-record 19 made three-pointers. The Razorbacks (19-7, 9-6 SEC) have won five games in a row and eight of nine heading into the SEC Tournament.

Arkansas softball (11-2) went 6-0 at the Razorback Invitational over the weekend with four shutouts for coach Courtney Deifel while stretching its winning streak to 10 games.

Yurachek event-hopped to take in all the winning.

“I was able to go to every single event for some length of time,” he said. “Like I went to the first half of soccer yesterday and the last four innings of softball, then went over to baseball until we got in the rain delay, then went and saw the end of our men’s tennis match.

“So that’s kind of how my Sunday went. From men’s tennis I went to women’s basketball. So I was able to touch and feel every single event and every moment of success our student-athletes had.”

Not every Arkansas win was on campus, as coach Courtney Steinbock’s women’s tennis team improved to 9-0 with a 4-2 victory at Missouri on Sunday.

The Razorbacks had the kind of splashy weekend that sparked Twitter tributes like the one SEC Network anchor Peter Burns wrote, “How about that weekend for the @ArkRazorbacks,” before listing the accomplishments.

There are more active UA teams ranked in the top 20 right now than not. The weekend was not a complete success, however.

The No. 6 Arkansas gymnastics team of coach Jordyn Wieber scored 197.0 at Barnhilll Arena but dropped a tight meet to No. 7 Alabama on Friday.

All in all, the Razorbacks wrapped up February with a spring in their step and an all-timer kind of weekend to remember.

Arkansas’ Class of 2022 Could Have Potent Look on Offense