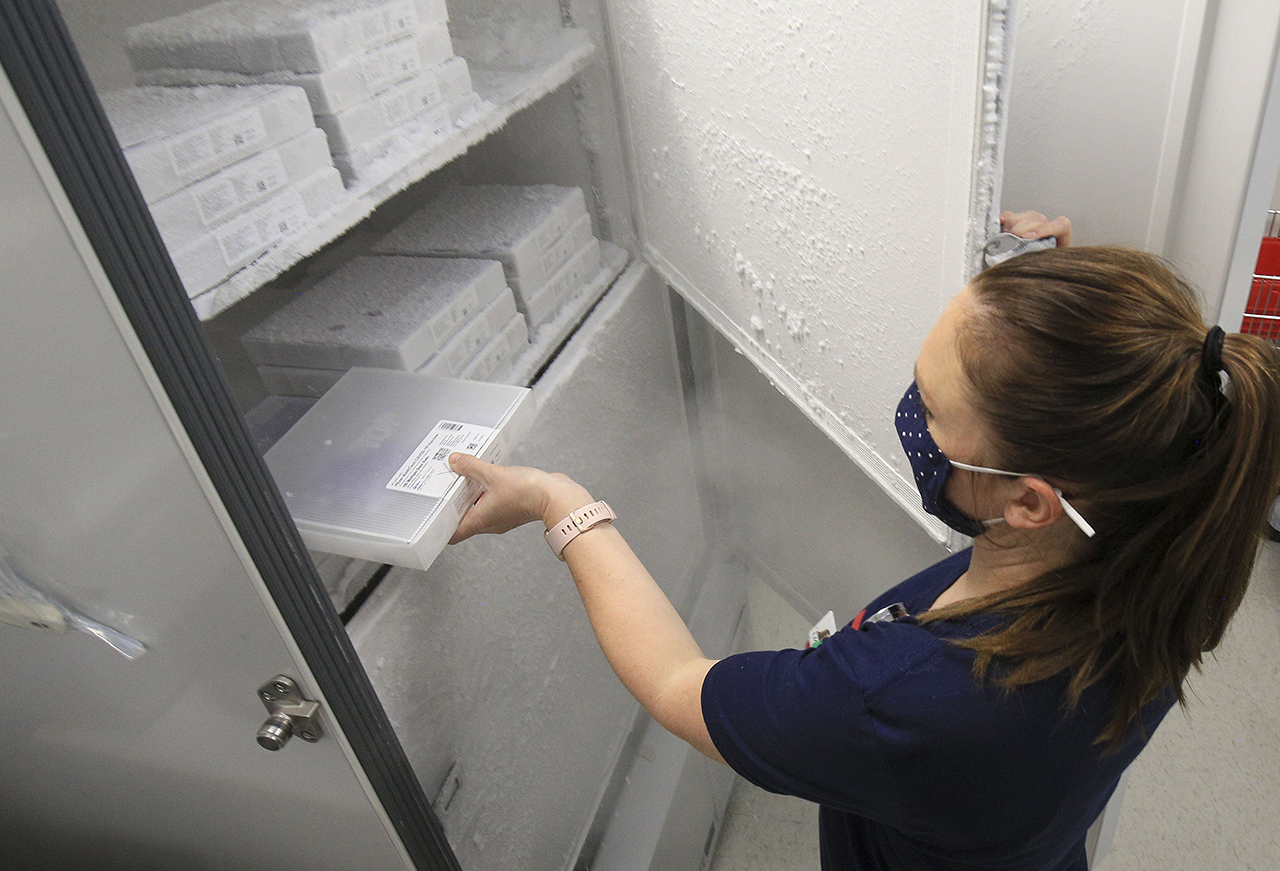 FAYETTEVILLE, Ark. – At the beginning of March, one of the largest mass vaccination clinics held in Arkansas since covid-19 shots became available late last year was planned on the campus of Arkansas State University in Jonesboro.

Organizers hoped to vaccinate 3,500 people at the event on March 6.

The lackluster turnout was concerning, and in many ways was a portent for what was to come in the days and weeks ahead: A rapid decline in public interest in obtaining vaccinations against covid-19.

It prompted Gov. Asa Hutchinson to hold an emergency news conference two days later, during which he announced that more people would be eligible for shots as part of an effort to boost demand.

Since then, interest in covid-19 vaccinations has further declined.

Against this backdrop, Arkansas has received shipments of thousands of additional doses of vaccines. The state is allotted tens of thousands of doses per week, but recently put a pause on new orders. Meanwhile, some pharmacies participating in a federal retail pharmacy program order their own shipments separate from the state’s supply.

While the organizers of the March clinic in Jonesboro said that virtually no doses were wasted because only a certain amount of vaccine was thawed, pharmacists and other health care providers who are sitting on sometimes hundreds of vials containing thousands of doses say they are growing increasingly anxious that doses may go to waste.

“I am concerned,” said Lelan Stice, pharmacist and owner of Doctor’s Orders Pharmacy, which has several locations, including in Pine Bluff, that organize regular on-site and off-site vaccination clinics. “We could have some [vaccines] go out of date.”

Stice said he has a stockpile of about 6,000 doses of the covid-19 vaccine produced by Pfizer and BioNTech, and is storing roughly 3,000 doses of the Johnson & Johnson vaccine for the Arkansas Department of Health.

“We are doing what we can to get the doses pushed out,” Stice said.

As if managing various covid-19 vaccines — each with different parameters for transport, for storage and for dispensing — was not hard enough, state health officials and health care providers are now faced with a whack-a-mole scenario where unused vaccine stockpiles appear to be almost constantly on the move among pharmacies, vaccination clinics, local health units, hospitals and doctors offices to try to prevent possibly thousands of doses spoiling by as early as the end of July.

“Our vaccine supply in the state is plentiful,” Hutchinson said in a statement Friday that was released with the day’s covid-19 update. The state saw 222 new cases Friday, two additional deaths and 25 additional active cases, bringing the total number of active cases to 2,176 in the state, according to the Department of Health.

An additional 7,290 doses entered the state between Thursday and Friday, bringing the vaccine stockpile in Arkansas to just over 754,900 doses as of Friday afternoon, according to data from the Health Department.

That figure includes the state’s allocation from the federal government and doses received by pharmacies from a separate federal vaccine program, said Dr. Jennifer Dillaha, the state epidemiologist.

Still, there may be some doses unaccounted for, she said.

Under its direct supervision, the Health Department has more than 564,000 doses, some of which are stored in-house and others in hospitals, pharmacies, local health units or doctors’ offices.

“My big concern is that we won’t vaccinate people out of concern of wasting doses,” Dillaha said. “Which I think is the opposite of what we need to start doing since we have plenty of doses to meet the demand in Arkansas.”

To handle the logistical nightmare of vaccine distribution, the Department of Health and the governor’s office enlisted retired Air Force wing commander Col. Robert Ator to work with the Arkansas National Guard to get vials where they are needed.

The Arkansas Democrat-Gazette made repeated requests to the Health Department and the governor’s office to interview Ator, but he was not made available to discuss how he and his team are working to mitigate vaccine waste or spoilage.

“The state has done a really fantastic job minimizing wastage,” Ator said during the governor’s weekly covid-19 news conference Tuesday. “Where our focus is now is to make sure we don’t have any large-scale wastage.”

“We do have an excess supply here in the state,” Ator said. “We want to make sure we are using that efficiently, so everything we are doing now is trying to triage the doses before an expiration date to make sure we don’t have any large-scale wastage.”

As of April 28, 5,528 doses had been wasted since the vaccine rollout began in mid-December, according to the latest data available from the Health Department.

Of those, 2,872 doses were wasted after a vial was opened but not all of the doses were administered. An additional 1,584 doses were discarded after being drawn into a syringe but not administered, the Health Department reported.

As of May 2, covid-19 vaccine wastage nationally was about 0.13% among more than 310 million doses that had been delivered, according to the U.S. Centers for Disease Control and Prevention, which requires states to track waste.

“This rate is extremely low, which is evidence of the strong partnership among the federal government, jurisdictions and vaccine providers to get as many people vaccinated as possible while reducing vaccine wastage across the system,” Kate Grusich, a CDC spokesperson, said via email.

“As vaccination supply expands and opportunities to receive the vaccine increase nationwide, CDC anticipates wastage may increase,” Grusich said. “Though providers might make every effort to reduce wastage, sometimes wastage occurs as part of the process to ensure that anyone wanting a vaccine can receive one.”

Health care providers, ranging from rural pharmacies to major institutions like the University of Arkansas for Medical Sciences in Little Rock, say wasting doses is now not only likely but expected.

Back when demand far outstripped supply, it was easy to find people to take leftover doses, those who administer the shots said.

Now that can be nearly impossible and requires a shift in strategy to trying to inoculate anyone who wants a shot — even if that means opening a vial and having a few doses go unused.

“We really have had kind of a shift in our thinking,” said Deborah Hutts, a UAMS nurse who oversees covid-19 vaccine clinics. “Our tolerance for waste has definitely changed.”

As of Thursday afternoon, UAMS had 2,380 doses of the Johnson & Johnson single-shot vaccine in stock and 17,075 doses of the two-shots Pfizer vaccine.

UAMS has also shifted its focus from large-scale clinics to smaller, micro-clinics that target a couple of dozen people instead of a couple of hundred.

Hutts said, so far, UAMS has had “very minimal waste.”

“We have learned not to even mix that many [doses] up,” she said. “So we have learned to adjust and make sure we have vaccines for people coming in the door but not work so far ahead.”

For pharmacies in more rural areas, it is harder to mitigate waste.

Dr. Daniel Bryant, a pharmacist and owner of Watson Pharmacy in Fordyce, which has a population of about 4,000, has more than 300 doses of the Moderna vaccine in storage.

On Wednesday, Bryant said he administered about five first doses of the vaccine and 30 or so second doses. Those five patients will have to return for second doses in several weeks, meaning five of the 10 doses in one vial of Moderna could go unused.

“I am concerned that we will start wasting some shots,” Bryant said. “So far, we have not had to waste but maybe five or six [doses], but after a month or so, it could be a much greater percentage than we have seen.”

As for Bryant’s stockpile, he said the earliest a tray of vials expires is sometime around the end of September, with others set to spoil in October.

“There is no pharmacy in Arkansas that does not have enough right now,” Bryant said. “In January and February, there were pharmacies that could not get enough. Now everyone has more than they need.”

“I wish there was someplace we could give some to that needed it,” he said. “I really don’t know what to do at this point. It is kind of a wait-and-see.”

The Health Department is monitoring expiration dates of vaccines and working to move supplies to places where those that are set to spoil in the next couple of months can be used, Dillaha said.

Bryant said he had not been contacted, so far, by the Health Department concerning his vaccine supply’s expiration dates, possibly because there are other reserves in the state with earlier expiration dates.

Last week, the Health Department did not place an order for new vaccine shipments that would have been delivered this week, Dillaha said.

This week, the Health Department placed an order for more Johnson & Johnson vaccine after initially deciding once again to not request additional shipments set to arrive next week.

“The expiration dates are being monitored,” Dillaha said. “It is possible that we would lose some if it expires.”

It appears many pharmacies are working on managing vaccine reservoirs themselves.

There are dedicated Facebook groups where pharmacists post requests for additional vaccines or requests for excess vaccines to be picked up by another health care provider who can use them.

Brittany Sanders, a pharmacist and co-owner of The Pharmacy at Wellington in Little Rock, has been sending employees across the state to move supplies from more rural pharmacies to pharmacies in Central Arkansas for redistribution.

“We picked up over six trays from Northeast Arkansas alone,” she said. “They were brought to the state during the peak [demand] and needed to be redistributed so they could be used.”

Sometimes pharmacies call to pick up small batches so they do not have to place orders for more, she said.

“We have significant quantities that could potentially expire at the end of July and the end of August, so we are hoping we can get those administered prior to that,” Sanders said. “Right now, I think there is enough movement of the doses that it will be OK.”

“I may feel a little differently as August approaches,” she said. “We have four months to move this.” Waste will be minimized “as long as things continue to be done smartly, and we are not bringing in extra doses when there are doses available and when there is already vaccine that needs to be redistributed.”

On masks, Arkansas lawmakers intervened where there was no problem

Conway Regional has topping out for new CCU